The Failed Promise of the American Dream in “Cheap Land Colorado”

Lines suggest beginnings and endings, possibilities and limits, differences and connections. Lines can be made by humans. Hand-drawn borders on maps mark one sovereign’s subjects from another’s, their consequences cascading down generations in languages spoken and traditions shared. Lines can be made by nonhumans, too. The horizon stretches across the sea. Waves reach up to sand and leave fingerprints. Forest pathways bear traces of deer and rabbits, even (if you look closely) mice and ants. And lines can, more inexplicably, be made in the space between the human observer and the nonhuman world. Childhood memories of standing on a cliff are a series of neural connections etched into the brain while the child, the cliff, the sea, the wind, and the gulls occupied that moment together. Whether the adult wants to remember or forget the cliff, the cliff has left its trace in her.

Sensitively translated from the Danish by Caroline Waight, Dorthe Nors’ A Line in the World: A Year on the North Sea Coast collects lines: horizons, pathways, landscapes; borders, words, memories. More explicitly, these 14 essays document Nors’ trips up and down the North Sea coastline over the course of a year. Armed with a wrinkled map gifted by her parents, Nors revisits foundational sites from her childhood and sets foot on sand and soil new to her, yet deeply layered with the North Sea Coast’s history. As Nors drives along the Coast, she maps out where individual and collective memory merge in these harshly beautiful landscapes. Atop Skallerup Dune, she first explores travel’s uncanny ability to kick up “fragments of memory,” like dust motes in an old room. This excavation of memories, she realizes, is what awaits on her yearlong journey: “Somewhere there’s a door leading to an archive of moments that have escaped us. No matter where you linger, you must orient yourself among the records or avoid them.” Nors’ choice is clear. She orients herself among dust and dirt, sea and sand, brilliantly capturing specks of memories which dance in the light, however briefly. Like W.G. Sebald’s narrator in The Emigrants, who watches dust dance in the projector light, Nors documents how the past haunts the present.

Memory, history: as Nors would have it, the line distinguishing one’s own memories from others’ stories is thin, nearly unrecognizable. Deep in the forests of Bulbjerg, Nors considers how a “landscape is an archive of memory,” its paths marked by all the feet and paws that have ever walked it. While gazing out from Denmark’s westernmost point, in the Blåvand Lighthouse, Nors grapples with centuries’ worth of often complex, often violent shocks of coastal encounters. “The culture of the coast has always revolved around migration and ethnic interchange,” she writes later. From the lighthouse, she can see the long process of healing from this interchange’s violent potential. She directs our gaze: look, ruined Nazi bunkers have recently been refashioned into donkey sculptures.

At first glance, A Line in the World is organized with reassuring verticality. The essay names in the table of contents mirror the downward sweep of the names of coastal towns, drawn on a map following the table of contents. (A charming drawing by Nors’ friend Signe Parkins precedes each essay, making the collection approachably reminiscent of children’s adventure books.) The reader expects a gentle sweep from the top of the map to the bottom, a predictable downward stream of travel narrative. I went here, I saw this. But Nors—a perceptive thinker of “place-bound memories” and, presumably, an eager reader of Sebald—is too formally inventive for that. She travels up and down the map, in no particular order. She crosses borders according to a timetable known only to her. Her essays often begin and end in the same place: her mind has journeyed, not her feet. She writes from the perspective of migrating birds, wise flocks, weary forests, admonishing seas, unruly storms. In one memorable passage, she imagines the North Sea drained of water and turned into a landscape. She conjures shipwrecks, treasures, corpses, houses, churches, sea creatures—“[a]nd then I couldn’t hold back the water any longer. In my imagination, I pictured it sweeping in across itself, hiding all its secrets. A massive, terrifying wave washed my mental image away.” Nors collects and collects, picking up memories like seashells and listening to what her ear and the shell say to each other. A Line in the World is linear in the way memory is linear: it is, until you realize it’s not.

The entanglement of memory, history, and imagination to account for past and future loss is Nors’ central concern. Driving her Toyota from one locale to the next, Nors finds landscapes marked by a particular history of loss, and deeply vulnerable to climate change. She remembers the fall of the massive landmark Skarre Cliff after only one storm, “like the sea gently pushed it off its pedestal overnight.” She marvels at how the Dutch gull population has adapted to dams—built to keep the waters from redrawing the map, and worse—by breaking mussels on them. In several essays, she relates the crunching demise of ships great and small. The hum of impending destruction is audible in each essay, magnified by Nors’ aching attention to the world as we know it and have known it. She is a keen observer, though not a naïve one: “Those who live by the water are under constant threat from it. In return, the water gives them access to the world, to trade, to riches.” Catastrophe and opportunity go hand-in-hand, she reminds us, and our fears are conditioned by place-bound history, by the memories passed down to us.

In the collection’s most haunting essay, “Wadden Sea Suite,” Nors captures in amber the now-extinct matriarchy of the Wadden Sea. “And there they sat, the women of Sønderho,” she writes of these women, left by seafaring husbands to command the village. “They settled their broad backsides around the table, becoming their own version of fire. Gossip set ablaze.” Passed down from mother to daughter, the women wore a uniform to designate themselves as Frisian sailor-wives: a cloth knotted around the head like a sail, a buttoned-up jacket (with a single button left undone, if married), and skirts—layers upon layers of skirts. In thinking more broadly about loss and landscape, Nors focuses on the slow phasing out of this way of life and its uniform:

“For it meant more than just power. It meant longing, hard graft, vulnerability. And it meant that you lived with the Wadden Sea, in birth and in death. That you realized what those great flats gave—life and rich growth, wildfowl, glasswort, amber—and what they took from human life. Grief came with the privilege of wearing the clothes […]”

The Urgency of Existence in “I Fear My Pain Interests You”

Those skirts were made to hold generations upon generations of grief. And while those skirts are still passed down from mothers to daughters, they are no longer worn on the shore, one eye set on the horizon. But something has survived, and it is this survival in the face of so much loss which draws Nors’ eye. At a pub, Nors watches a couple dance the traditional sønderhoning, “as though it were a quite ordinary thing to do at the End of the World one weekday night: to dance a dance so simple and powerful that it has survived for generations.”

We return, then, to dancing. Dust dancing in the light, couples dancing across generations. In A Line in the World, a return is never, truly, a return. “[T]he place you come from is not somewhere you can ever return. It no longer exists, and you have become a stranger.” Staying in one place will also not keep the land from moving under your feet. Waves crash on the shore, restructuring the sand architecture. Pathways are widened by paws or, unused, covered over by the passage of leafy time. “Then I had to move on; I had to shift the site I came from inside me, turning it into a memory.” Memory, history, and imagination: for Nors, these are, miraculously, the places we can return to. They shift with us and our landscapes. They dance across hand-drawn lines. We, too, must dance: with them and into them. “There are no borders to the stories told along a line,” she writes in the first essay, “The Line.” “But a landscape is beyond the telling, like the telling is beyond itself. It takes a person to take up the line somewhere, to open, look and make a cut.” 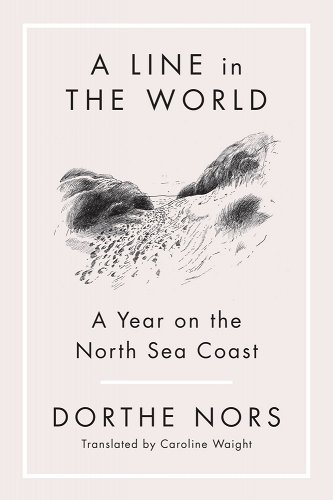 NONFICTION
A Line in the World: A Year on the North Sea Coast
By Dorthe Nors, translated by Caroline Waight
Graywolf Press
Published November 1, 2022

Elizabeth McNeill is a writer and editor with a Ph.D. from the University of Michigan. When not doing her cat’s bidding, she writes about female creativity, embodiment, nature, and ghosts in contemporary translated literature. You can find her book musings on Twitter @eamcneill.

A Window Into Both Past and Present in “Hawa Hawa”