The Violence of Photography in Stephanie Gangi’s “Carry the Dog”

In 2016, I saw two exhibitions of Ai Weiwei’s work, at Lisson Gallery and Mary Boone Gallery, five years after he was imprisoned in China for three months (with his passport confiscated for another four years thereafter). I distinctly remember both the massive structures of the Ai Weiwei 2016: Roots and Branches exhibit as well as the detailed drawings in his “wallpaper” series that included repeated images of barbed wires and lines of refugees, yet the experience was larger than the sum of its parts.

Reading 1000 Years of Joys and Sorrows: A Memoir—beautifully translated by Allan H. Barr—makes the memory of that experience even more poignant, and more remarkable. This book is an equally uncategorizable combination of memory, art, and poetry—Ai’s father, Ai Qing, was an acclaimed poet who was later declared a “Rightist” anti-government intellectual and sent with 10-year-old Weiwei to China’s “Little Siberia” during the Cultural Revolution—and the attendant stakes of demanding political and personal freedom for the self and others is woven throughout

Ai Qing’s literary career and life—which takes up the first third of the book—occurred at a time of remarkable change in China, and the sharp, unexpected shift from celebrated poet to public enemy underscores the tectonic plates inherent to an autocratic state. And in truth, as this memoir imparts—as our own present circumstances dictate—there is nothing that is settled and secure, and we have limited time before potentially calamitous events happen in our own lives. What will we do with the time given us? How will we make our mark? Who will we stand up for, and what risks are we willing to take to be true, and to be truly human?

Ai Weiwei’s artistic “documentations,” spanning a diversity of visual, sculptural, videographic and social media modalities, and his later imprisonment, feel pre-ordained given his parentage and early environment. Yet, is it only our heritage and gene pool that sets us on our path? If that were the case, I wouldn’t kill every plant that entered my home, given my dad’s lush green thumb. Likewise, witnessing and experiencing his father’s persecution alone can’t fully explain Ai’s  enduring power, output and his determination to witness and speak for those who are silenced and erased, at great personal cost. He writes: “art should be a nail in the eye, a spike in the flesh, gravel in the shoe: the reason why art cannot be ignored is that it destabilizes what seems settled and secure.” When what seems settled and secure is an authoritarian state, then the battle lines are drawn.

Ai’s art isn’t limited by medium: it’s visual, physical and digital, a combination of his diverse interests and influences. After studying in China, he came to the United States in the 1980s where Marcel Duchamp’s work specifically and Dada generally struck a chord, whose “emphasis on art as an intellectual and not simply a visual experience that would be a lifelong inspiration to me. His interest in ordinary objects, in the “readymade,” was already influencing my own artistic productions.” His later forays into the digital arena, especially that of social media, expanded his reach globally, making him a larger target for the government, and also ultimately created a worldwide response to his imprisonment that helped him get released. This is an echo of his father’s life: the irony of artistic fame marking one for opportunity, punishment, and later, release. Yet, Ai isn’t seeking fame, as much an unswerving passion to create: how “in late 2005 I composed my first blog post, slowly typing out the words ‘“To express yourself needs a reason, but expressing yourself is the reason.’””

His early work juxtaposed such ancient objects as Han Dynasty earthenware with capitalist branding devices such as the Coca Cola logo. It explored deconstruction as a way of revering and questioning the beauty of the past, as well as entwining it with the present and future; and like Duchamp, like Warhol, making the ordinary extraordinary:

“I was taken with obscure objects, and made a point of buying things that seemed to have little or no value; my hungry spirit was nourished as I imagined the stories lurking behind each piece. The observations and insights that came to me from the distant past spurred me on to make art of my own…By alternately damaging the past and reconstructing it, I was able to make something different…Disdain is a chasm that no power can cross; it makes space for itself by subverting order.”

Yet, in many countries, throughout our history, such subversion makes those in power uncomfortable, threatened and retaliatory. Indeed, Ai’s installations have also often been sociological and multifaceted in nature, exploding what we consider art, and who we consider artists. Consider “Fairytale” in 2007, when Ai selected 1,001 people—1,000 to represent the crowd, and 1 to represent the individual—from China to Kassel, Germany to participate in Documenta 12, a global art assemblage. The juxtaposition of East and West and “regular” people who likely never left their towns with global art cognoscenti underscores the economic and social frictions in our world, as well as subverts the conventional wisdom about impossibility of such interactions, and “dreams come true.”

Memory is a recurrent theme—perhaps the recurrent theme—of this book. Ai recollects his father’s storytelling which “seemed to have no purpose beyond making sure his stream of memories did not dry up,” though he later notes that “I felt no attachment to my memories. My memories didn’t belong to me…It would be decades before I could give substance to those memories.” It’s to our benefit that he’s done so here, because tracking the artistic journey has as much value to us as understanding scientific discoveries. “In the era in which I grew up, ideological indoctrination exposed us to an intense, invasive light that made our memories vanish like shadows. Memories were a burden, and it was best to be done with them; soon people lost not only the will but the power to remember. When yesterday, today, and tomorrow merge into an indistinguishable blur, memory—apart from being potentially dangerous—has very little meaning at all.” And yet, in the same way that he tackles large-scale artistic projects, Ai has sculpted an expansive and uncategorizable memoir that is entirely about exceptionally dangerous memories and people and creations that were meant to be forgotten.

When there are no definitions, boxes, rules, or evergreen processes, society and authorities are threatened to be sure, but what results is often reflective of how history and nature shift, fall dormant and re-animate. In many ways, Ai sees the world as the ultimate canvas, and everything on it a form of expression, though the artist doesn’t have an elevated role, any more than anyone else does. “I had come to realize that art is simply an identity, and nothing else. To break free of constraints doesn’t mean you have gained freedom, for freedom is an expression of courage and sustained risk-taking, and facing freedom is always difficult, whatever the time and place.”

Following a visit to the “ruins of an ancient Silk Road city in Xinjiang,” Ai Qing wrote:

Of a thousand years of joys and sorrows
Not a trace can be found.

In a sense, this remarkable memoir—like Ai Qing and Ai Weiwei’s resilience in the face of overwhelming political persecution—stands in opposition to this beautiful excerpt of the former’s poetry. Ai Weiwei writes: “I am not concerned about how far I can go in my journey or where the journey will take me; no matter what happens in the future, I undoubtedly will be part of that future.”

1000 Years of Joys and Sorrows feels like a multi-floor retrospective focused on artistic and political lives through tumultuous eras in 20th and 21st century China. Room after room depicts creation, destruction, resilience and resurrection through language and visual components, spanning a solid 80 years of history, from prior to Mao’s climb to power, through the Cultural Revolution into China’s shifting politics and continued societal and artistic oppression in the current day. The curation is thorough but not all encompassing; both large in scale and minute in detail depending upon the projects, much like Ai’s works themselves. This open-endedness is entirely appropriate, because these stories—especially those of the millions of people suffering persecution anonymously throughout the world—will never be over.

After several hundred pages, one also feels that at its core, this is a love letter, to his father, ancestors and compatriots to be sure, but especially to and for his young son, Ai Lo. This volume ensures that his son knows who his father was, and is, as an artist, as a man, regardless of what governments do now or in the future. Art may be silenced, or hidden or utterly destroyed, but joys and sorrows, and the love of a father for a son, live on. Ai Lao will have this memoir as an unerasable legacy of what his grandfather and father sacrificed—and more importantly, created—and in this multifaceted construction, Ai Weiwei offers us an uncountried installation that will never have a closing date nor be taken down. 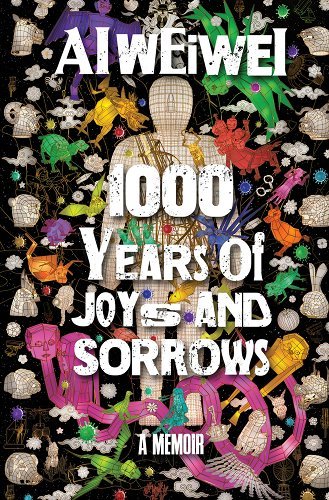 Better Lives for All Us Animals in Martha C. Nussbaum’s “Justice for Animals”