Emotions Take Flight in “Smile: The Story of a Face”

Jackson Bliss’ new experimental fiction collection is based on narrative counterfactuals, or ideas that exist in relation to their not-existing, offers what Anne Carson calls “two realities for the price of one.” Counterfactual Love Stories & Other Experiments unsettles the way we know the world, or the conditions of knowledge which render the world stable, reliable, and predictable. Bliss achieves this at the level of the line as well as the narrative by working the hyphenated conflicts of American culture, the tensions between identity and self-knowledge, straight into the banality of context-collapse.

The first story, “Conspiracy of Humans,” is a fanasts’s apocrypha, a prosodic paean to the derring-dada of youth culture at a time where everything over-signifies to the point of nonsense. The odious conspiracy at the heart of the piece turns out to be a series of terrorist acts and vandalisms staged by tweens with no specific goal in mind. The torque lies is how the meaningless signifies more than the litany of theories the adult characters use to explain it in the confluence of media events which bloom from the effort to try and understand the terrorists.

“Secret Codes and Oppressive Histories” narrates a family man’s interior landscapes as he ponders life from a train window leaving Chicago. The conflict emerges from silence and form, particularly in Bliss’ use of bolded words to illuminate an alternate story, a raised palimpsest decoded as follows: “He loves the idea of love but only when he’s afraid of disjoined state maps and swollen tales of grief. Somewhere between hazmat rain and blue diner tequila, the blinding splendor of paradise feels divorced from the prairie and the air.”

The bolded part of the story contradicts the speaker’s self-characterization as a laid-back Midwesterner riding the tracks to visit family; one doesn’t realize the speaker is a veteran until going back and writing down the bolded code. The story ends with evoking Shizuka, the love who left him, defining the narrator as “a survivor of history, like her.” But the last line—“The problem has always been that they’ve never fought the same war.”—reads differently after deciphering the secret coded text. What hides beneath the silence of veterans, inside the love stories born between war’s uniforms and its civilians, its colonialists and its locals, evokes the problematic nature of heroism. The distance between what we say and what we hide comes home to haunt us.

A background in music and composition shapes the musicality of Bliss’ prose bringing electric neon to classical shape and form. “Blue Is the Loneliest Number,” for example, narrates the experience of Yumi, an older, mixed-race woman who is losing her sight; the images are dubbed, recalibrated, and altered by memory. She preserves the visible by making an inventory of things she has seen and wants to see again. “With blindness comes creativity,” and Yumi revisualizes this “last world” daily. She studies Chagall’s blue, and the perception of color itself becomes a counterpoint to the recording function of memory, since the blue depends on the light, the time of day, the viewer. According to Yumi, “only artists, mirrors, and birds — messengers of colors, duality, and song — could ignore the laws of gravity.”

In this, as in many of Bliss’ stories, time runs out, leaving its characters bereft in a consumerist world of constantly-changing landscapes, signifers, and delineations of identity. Markers of place double as currencies of displacement when Yumi recalls a childhood in Germany, a place she loved “the way only a Niesi could.” Every night, Yumi loses the story she invents about the world to sleep: “memory is unfaithful to the material world, unfaithful to the rules of objective color.” The loss of sight is “a monastery of synesthesia” an impression which must be “converted into language” as well as a race against time and the death of a certain self to whom she is faithful. For Yumi, the counterfactual appears in a gene from her white Czech mother. It is the inherited exterior retinal dystrophy inherited from her European side that ruins color, steals the visible world, bequeaths an absence.

“Kather Shinka” gives us the portrait of a writer narrated by the woman who loves Shinka, the woman who is fascinated by his mind and yet envious of its interests. Like Scheherazade, he tells her stories luxe enough that she can step inside them: “The problem with Kathe was that he always drugged me with his art, his eyes, and his language.” It’s hard not to glimpse the life of the writer, the storyteller whose mind is supple with stories, distracted from life or from the ordinary. To live with one foot in each world is to betray both, at some point, inevitably; it is to fail the story or to disappoint the lover. And yet, it is precisely these stories that draw the speaker to Kather, so we are left with a David Byrne-style “soft seduction” of both the writer and the character, and a sense in which the narrator is both.

The last story, “Semi-Permeable Membrane, is set in a jail cell and structured as a single, five-page sentence narrated by a wrongfully-arrested Peruvian-Japanense female caught in the crosshairs of racist optics. She thinks aloud, trying to understand how she got here:

“They found you holding someone else’s gun by the safety like you were afraid of getting contaminated by male violence, which you were, but when they saw the gun…they screamed at you like you were a threat to their existence.”

Compassion is Complicated in “Healing”

In the contamination of violence, police project their fears onto mixed bodies. Bliss uses this contradiction to occupy time in jail, where waiting for arraignment itself becomes the metaphysical counterpoint of counterfactuals: all the things that could have been otherwise, all the versions of hope and possibility and how the self lies in the crosshairs of the “culturally conflicted American binary.” Contrast this with the narrator’s vision of herself as a “no-good idealist,” hyphenated by racial and ethnic cells, “a series of spectral bodies, potential and real, counterfactual and imagined” with every choice and possible action laid “in metaphysical counterpoint.”

Bliss’s narrator laments being “too ethnic for white spaces” and “too light-skinned for people of color,” setting up a flipped counterfactual, a question of how much identity can hold or carry before asking one to choose a side. But choosing a self loads the die. To paraphrase Bliss, the space where we say goodbye is not the end of the story.

Allusions create texture in these stories. I’m not sure if the author intended the reader to ponder our personal brands as writers, or the extent to which branding is a capitalist realist performance, a belonging invented to make up for not belonging anywhere at all. The questions of fidelity and loyalty posed in these stories are tied inexorably to the expectation of recognition and appreciation. The problem for hybrid forms (and persons)  is that no one knows how to appreciate one part without depreciating the Other. “Counterfactual love stories always hit her the hardest because they disobeyed every rule she’d fought so hard for,” Bliss writes of Yumi. And it is these rules he continues to disobey and spin in this collection. 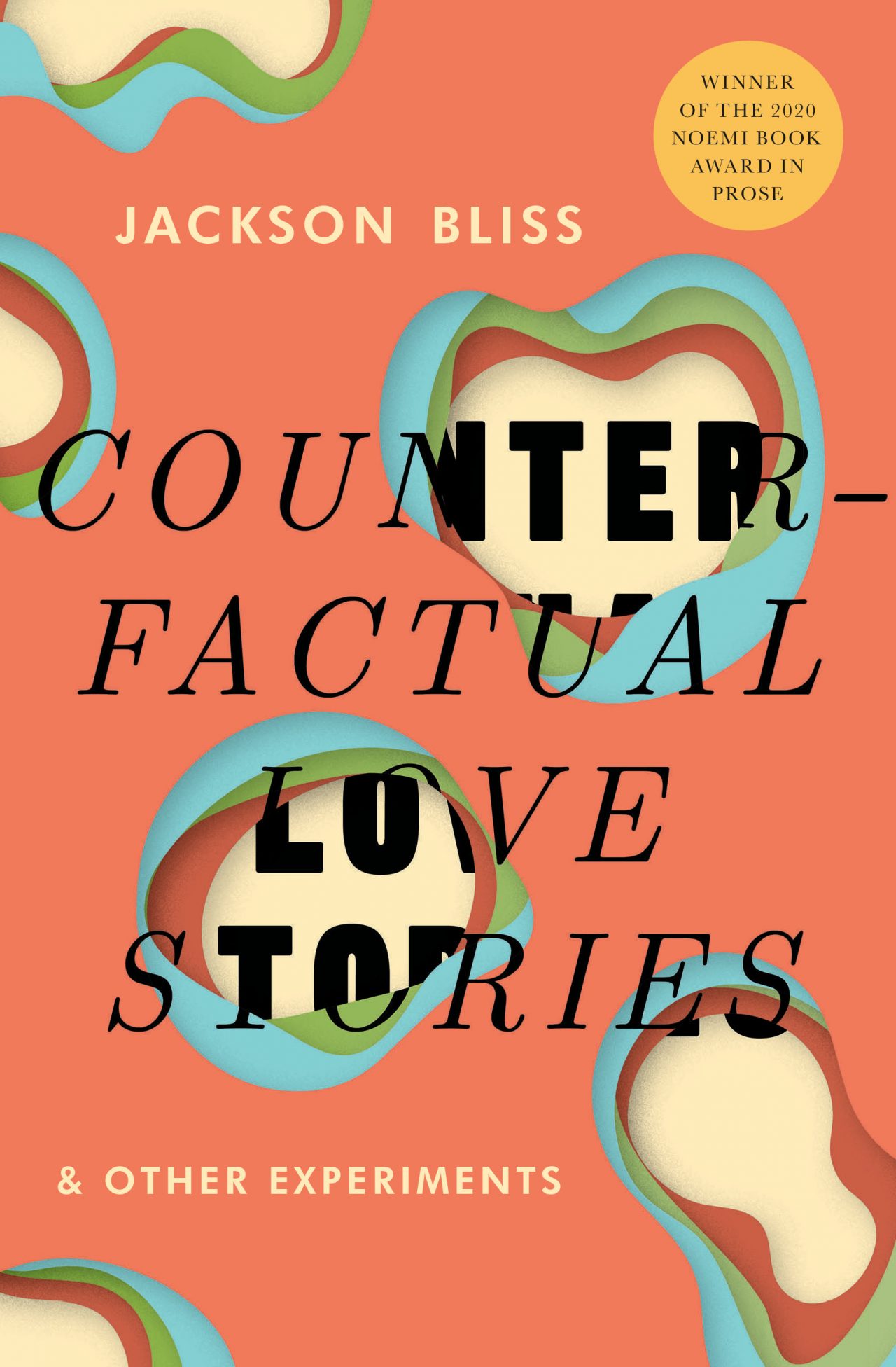 Alina Stefanescu was born in Romania and lives in Birmingham, Alabama with her partner and several intense mammals. Recent books include a creative nonfiction chapbook, Ribald (Bull City Press Inch Series, Nov. 2020) and Dor, which won the Wandering Aengus Press Prize (September, 2021). Her debut fiction collection, Every Mask I Tried On, won the Brighthorse Books Prize (April 2018). Alina's poems, essays, and fiction can be found in Prairie Schooner, North American Review, World Literature Today, Pleiades, Poetry, BOMB, Crab Creek Review, and others. She serves as poetry editor for several journals, reviewer and critic for others, and Co-Director of PEN America's Birmingham Chapter. She is currently working on a novel-like creature. More online at www.alinastefanescuwriter.com.