The Writer Who Killed Superman Just Reinvented Him 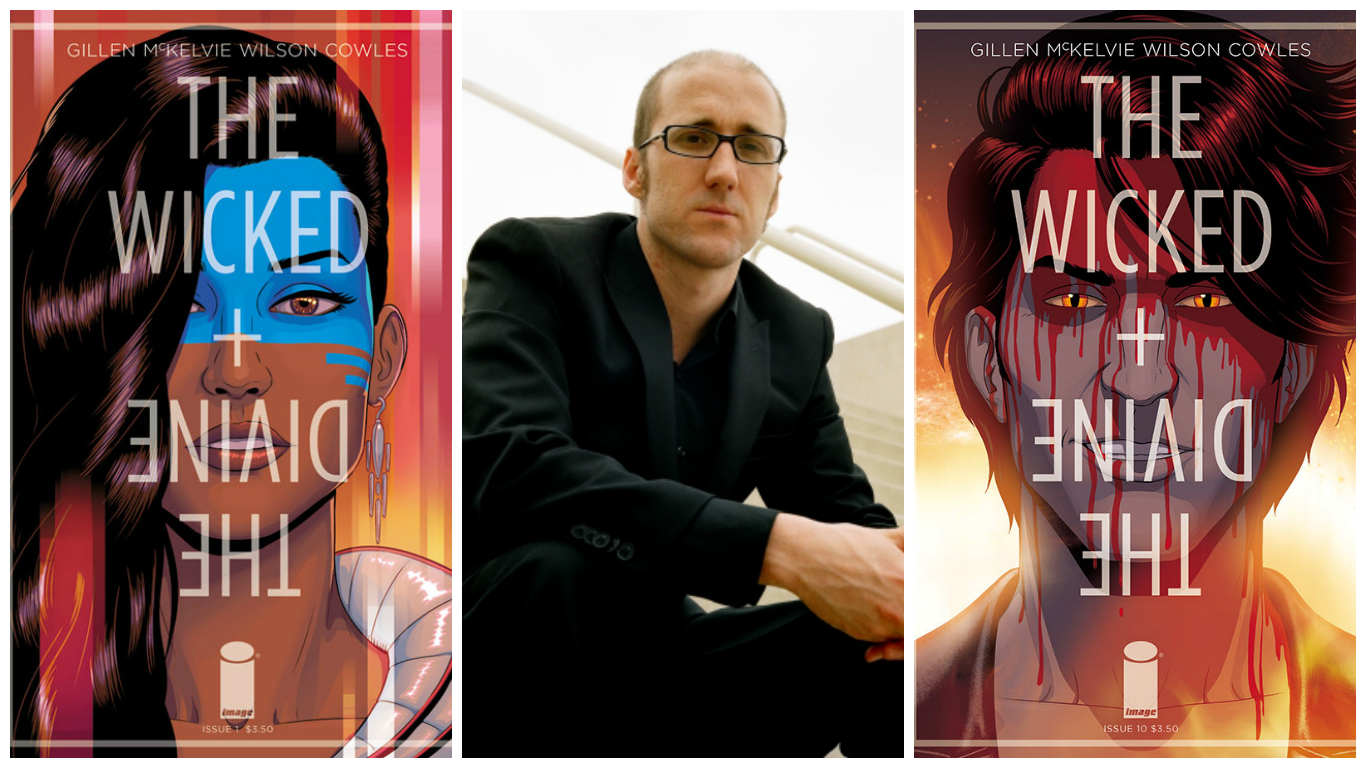 What if David Bowie was actually, literally a god? That’s the premise behind one of the weirdest and most beautiful comic book series of the decade thus far, The Wicked + the Divine, written by Kieron Gillen and drawn by Jamie McElvie. In their “WicDiv” universe, twelve of the world’s most famous pop stars are reincarnations of mythological deities like Dionysus, Lucifer, and the Morrigan.

This weekend, Gillen and McElvie will be at the Chicago Comic and Entertainment Expo (C2E2) to sign autographs, draw commissions, and speak on a few panels. I recently spoke with Gillen via email about mythology, music, and how the gods are really twelve aspects of his own personality.

Adam Morgan: With thousands of deities to choose from, how did you settle on these 12 archetypes? Did you binge on Joseph Campbell?

Kieron Gillen: My chosen metamythy-myth for WicDiv is Robert Graves’ The White Goddess, but that actually came after the structure developed. In terms of choosing the gods, I went on a deep-dive through mythology to see what was there, what appealed, and what aligned with the stories I had to tell.

It’s really about the big, dirty, fatal flaw in each of the gods. The ol’ hamartia is the real thing, and the specific god is (mostly) a way to express that. While we’re clearly hitting some big archetypes, the gods are various personality aspects (and flaws) of myself, which I spin out into whole characters. The story is about how they all play out, and how they learn (or don’t) their lessons. In the middle of this mess is Laura, who’s their synthesis. To some degree, she’s dealing with what all the rest of the cast are going through. It’s that kind of structure. It works through juxtaposition and irony.

I mean, the easiest way to describe choosing the archetypes would be: “These are the twelve parts of myself I’m going to ceremonially kill in a ritual to get over my own sorry ass.” Jamie [McKelvie] encourages me, bless him.

In terms of casting the specific gods, it was a mix of gods I just wanted to use and ones I found in the research which felt interesting. I was always pretty sure I was going to use the Morrigan — see the Gravesian triple goddess above — but I didn’t know how she was going to be cast for a while. There was a time she was going to take the role which ended up with Amaterasu, for example. We also wanted a mix of more unusual gods and ones with (for want of a better phrase) star power. Lucifer would be a good example of the latter. Baal would be an example of the former.

Adam Morgan: At what point did music enter the narrative equation? Bowie is the obvious influence, but who else inspires you?

Kieron Gillen: Right from the conception. It’s always interesting when critics give primacy to either the gods or the pop stars, as that’s kind of showing their hand. We introduce the book as “Gods as Pop Stars” and “Pop Stars as Gods,” as the serpent eating its tail is absolutely part of the endeavor. I talk about casting above — sometimes we cast the pop-star archetype first, and then worked out what god would be fit well. Sometimes we did the god first, and then chose the archetype. Occasionally it happened all at once, in that single breath. An example of the first category would be Woden, Amaterasu or Inanna. An example of the second would be Baal and Morrigan. Lucifer’s gender-switched Bowie as Lucifer would be the third.

Worth stressing that it’s archetypes here as well. While the similarities are clearer in some than others, I’m always trying to make an example of a type than a specific riff on an individual. Amaterasu people normally go for Florence Welsh when they see Amaterasu, but she’s your Kate Bush, your Stevie Nix … basically anyone who has ever sung a song while not wearing shoes. That’s true for the whole cast, even the most visually recognizable. Perhaps the ones which are most visually striking are the furthest apart — Woden’s Daft Punk influence is because there’s not many producers who have a visually striking look.

It’s also worth noting that WicDiv is about the whole history of art — what does art do to people, what does it for, how do we see artists and how does that change. We’ve done an issue set in 1831, which basically does an issue inspired by the Romantic Poets. You get Mary Shelley as Woden, Percy Shelly as the Morrigan and Byron as Lucifer, for example. The book is based on a series of cycles, so every ninety years we get a set of gods – and these are simultaneously eternal ideas, and entirely of the moment which they’re born. It’s pop stars for our 2014 pantheon, but in a different time, it could be many different things.

Adam Morgan: How has Jamie McKelvie impacted you as a writer?

Kieron Gillen: This is the sort of question which joke answers were made for. Jamie and I have been doing it so long it’s hard to imagine a way he hasn’t impacted me. We’ve been working together for at least fourteen years now. Jamie’s been my partner in my most personal, weirdest and creative endeavors. There are very few writer/artists who’ve got that kind of long term collaboration, and that whole period has basically been Jamie and me nudging each other to try harder and learn more.

Prosaically, the most recently change was that Jamie has me to say the number of panels that are on a page at the top of each script page. Only took me fourteen years to learn that that might be useful. Never said I was smart.

Adam Morgan: Who is your favorite character to write and why?

The Hauntings of Tension and Unease in “A Lonely Man”

Kieron Gillen: You’re loathe to actually give an answer to this, just because you’re worried about derailing part of the creative process if I start talking any of them up. You saw what happened to Paris. I’m not saying any of them are the prettiest one.

The way the book is built is that it’s really about how they interact. The cast is big enough that the fun comes from less the characters by themselves, than how they rub up against each other. You throw a pair of characters who really get under each other’s skin, and it’s always fun. Any time Amaterasu and the Norns get in the same room, it’s always going to be a fun day.

Adam Morgan: Which issue is your favorite(s) thus far and why?

Kieron Gillen: Issue 13 is a hard one to talk about. It’s one we received a lot of acclaim for… but it’s also one which 1) I wish I didn’t live in a world which meant that I had to write it, and 2) I wish was written by someone else, as getting complimented for something so horrible feels awful. But it’s also one which felt entirely necessary, in a book about celebrity in the modern eye. Really — WicDiv lets us work with an extraordinarily broad canvas, and we get to reshape the book in radical ways whenever we get the urge. Issue 23, where the whole magazine is designed to be a fashion magazine would be a great example. Issue 14, where we remix the pages of the previous issues to create a whole new comic. At other times, it’s just about doing comics as well as we can. You have things like issue 11, which felt like we were dancing. Dancing like the Maenads, admittedly, but dancing nevertheless.

Adam Morgan: If given the choice, which member of the Pantheon’s powers would you choose to possess?

Kieron Gillen: I think I share Baphomet’s wish for powers. As in, what everyone who isn’t in the pantheon has — behold! their amazing “being alive after two years” power. I wouldn’t swap my life for any of their powers. It’s just not worth it. However, I’m also aware that there were certainly times of my life I may have thought otherwise, which is really what WicDiv‘s all about.

I’ll go with Baal’s ability to rock a suit in any situation. Though Lucifer has that one too.

The Best Cook in Comics: An Interview with Jeff Lemire