Kieron Gillen Is Ceremonially Killing Himself in ‘WicDiv’ 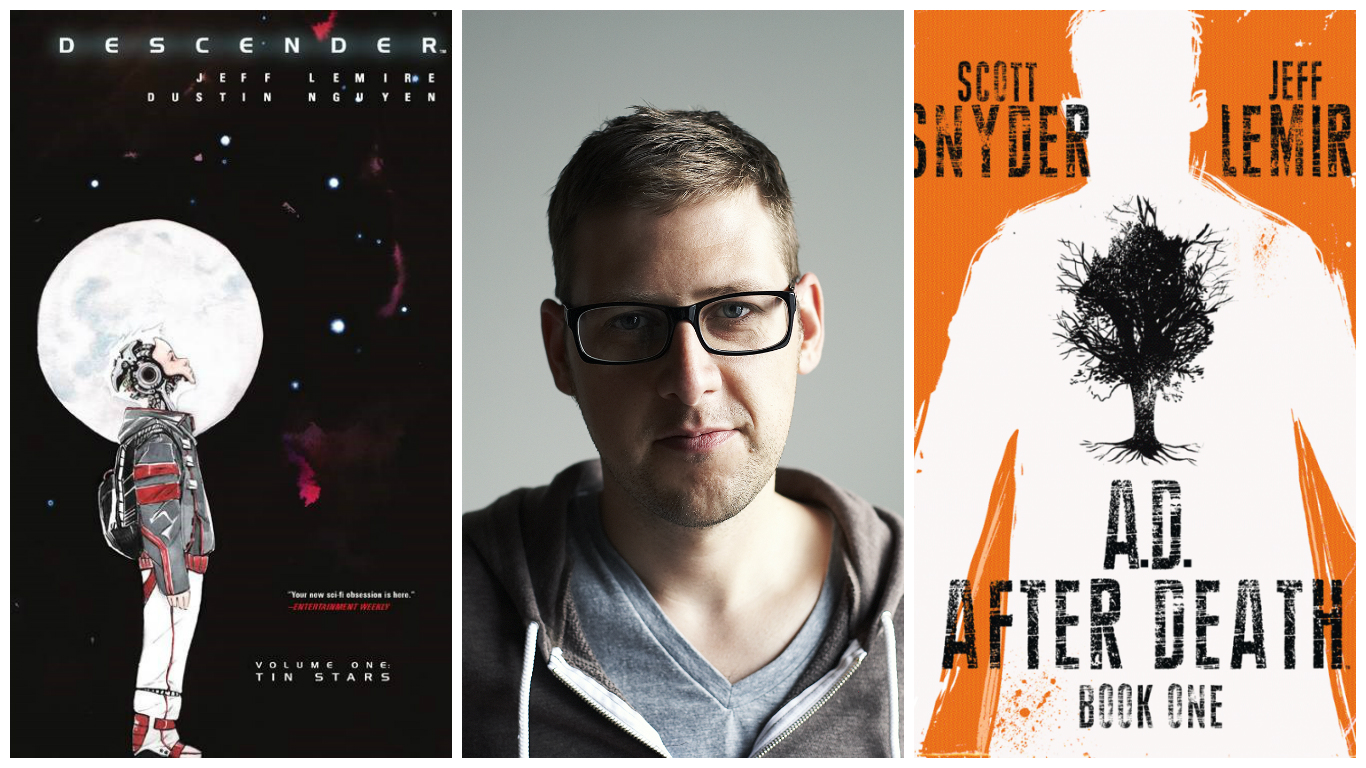 Fifteen years ago, Jeff Lemire was a line cook in Toronto. Today, he’s one of the most sought-after writers and artists in comics. If you enjoy science fiction, fantasy, and horror—but don’t read comics—his body of work proves you’re missing some of the best worlds and characters in the genre(s).

Lemire is perhaps best-known for Descender, the galaxy-spanning space opera he co-created with Dustin Nguyen. A movie adaptation is currently in development at Sony, and the series is on its fifth volume. He’s also writing a horror-tinged take on superheroes (Black Hammer), a small-town drama laced with magical realism (Royal City), and drawing Scott Snyder’s supernatural graphic novels A.D.: After Death. And I haven’t even mentioned all the work he’s been doing over at Marvel, including an amazing run on Moon Knight.

This weekend, Lemire will be at the Chicago Comic and Entertainment Expo (C2E2) to sign autographs, draw commissions, and speak on a few panels (here and here). I recently spoke with him via email about Descender, his writing process, and the myriad other projects he’s got in the works.

Adam Morgan: When you and your wife were working jobs that “barely paid rent,” how did you find the time (and confidence) to write your first comic book, when there was no guarantee it wouldn’t be a waste of time?

Jeff Lemire: I guess I had the benefit of the ignorance of youth. I was in my early 20’s and I just didn’t know any better. I was determined to make comics no matter what, so that’s what I did. I would work night shifts at various restaurants in Toronto, as a line cook, and then I would wake up and draw all day from 8am until 4pm when I would have to go to work again. I just did this every day and it became my life.

And I knew my work wasn’t good enough to be published yet, but guess I just kept seeing incremental improvements in my work, just enough to keep the spark alive and keep going. And, after five or so years of doing this every day, I did then eventually I started to do work that I felt was good enough to share and that was Lost Dogs and then Essex County.

Adam Morgan: When writing the young protagonist(s) of Descender, do you ever draw upon your own experiences as a father?

Jeff Lemire: Not really anything specific, no. I’ve always enjoyed writing from a child’s perspective. I did this in Essex County and Sweet Tooth before I had a child myself. I just love how fresh and innocent that perspective is. And I love writing emotional stories and childhood is a very emotional time, when you feel everything so strongly for the first time. And of course having a son of my own now, I get to see that happen in real life and it reinforces this sort of storytelling.

Adam Morgan: I’ve read that you originally planned Descender to last around 24 issues. Now that we’re approaching #21, do you have an endpoint in mind? How far away are we?

Jeff Lemire: The original 24-issue plan was a “safe” one. A way of me keeping my expectations lower in case the book struggled to find an audience. But the success of the book has allowed us to expand our ideas and really explore the Descender universe in new ways.

At this point my outline for the series is at about 36 issues, with an idea of how I could keep going beyond that if we still felt inspired. But that could all change again if we get some new idea that takes us in new directions. I would guess we are about at the halfway mark.

Jeff Lemire: Royal City feels like coming home in a lot of ways. For a few years now I’ve been longing to return to the kind of stories I began my career by telling. To be blunt, I wanted to return to the territory of Essex County. I wanted to get back to telling more grounded stories about “real people”. It made me wonder what would happen if I tried to do something like Essex County not as a stand-alone graphic novel, but rather as a serialized monthly comic book?

A graphic novel is a great thing. It allows you freedom to go off and create a story in a vacuum, free of the monthly deadlines and pressure. You can tell a story with a beginning, middle and end. To use a film analogy, doing a graphic novel is more like making a movie, but a monthly book can offer the same benefits as a multi-season television series. And, as we are now seeing with the golden age of television we are living through, longer serialized storytelling allows for exploring characters, themes and ideas across a greater amount of time and space

As much as I want to tell grounded and human stories about “real people,” I also don’t want to do a straight “slice of life” book. The comics medium is so rich in its ability to visually communicate ideas and emotions it would be a shame not to use that. So I love having this really grounded story, with a very realistic cast of characters, but also having this strange and mysterious other world just below the surface that our characters seem to be tapping into.

The book has no overt or outright “supernatural” elements, but there is a lot of magical realism, mystery and wonder in Royal City and it all seems to center around the character of Tommy Pike, and his mysterious death in 1993.

Adam Morgan: I’m sure drawing A.D.: After Death has caused you to think about your own mortality a bit. If we really could cure death, would you want to live forever?

Jeff Lemire: It depends. How long do you think Trump will be president?

Kieron Gillen Is Ceremonially Killing Himself in ‘WicDiv’