From Kickstarter to Comic-Con: The Only Living Boy Creators at C2E2 2016 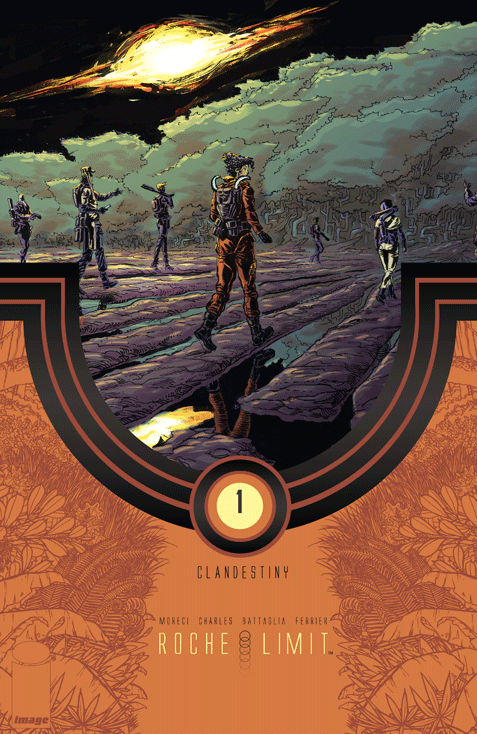 It’s not often that an “existential sci-fi noir” comic book from an indy publisher gets optioned for a major motion picture. But that’s exactly what happened to Roche Limit, a trippy, trailblazingly original cross between Alien, Chinatown, and Lost, about a distant colony of humans orbiting a black hole.

The writer and creator of Roche Limit, Michael Moreci, lives in Chicago with his wife, children, and dog. In addition to the movie deal, Roche Limit just debuted its third and final volume, Monadic, on March 16. Plus, Moreci’s got a new series forthcoming from Z2 called Indoctrination, and a two-book deal with St. Martin’s Press for a couple of science fiction novels, the first of which drops in 2017.

This weekend, Moreci will be in his hometown of Chicago at the three-day pop culture convention C2E2 (Chicago Comic & Entertainment Expo), along with hundreds of other writers, artists, and actors, as well as tens of thousands of fans. The Chicago Review of Books recently spoke with Moreci about his journey as a writer, working in Chicago, and his future projects.

How did you get into writing comics? What drew you to Image?

It all started with my love of comics and genre fiction. I’ve been writing fiction since I was a kid, and I’ve been making comics since then as well. I started as an artist, realized how terrible I was, got immensely discouraged, and discovered that you can just write comics, not draw them, and I was happy again. I wrote my first short comic in 2006, got it published, and I’ve continued to chip away since then, little by little. My goal was always Image—I grew up on their comics, and there’s no better place to make original comics work than Image. If you want to do content outside of superheroes and still be in the same market, Image is the place to be (or Boom, Dark Horse, Z2, and many others who do great original content as well).

What kind of science fiction did you grow up reading and watching? Were there any specific influences on Roche Limit?

The sci-fi I grew up on, from I’d say early high school on, is the exact sci-fi that is all over Roche Limit. There’s Blade Runner, Dark City, Gattaca, Alien, the work of Asimov, Vonnegut, Lem (Solaris especially), and so many others. I wear my inspiration on my sleeve, and that’s very apparent in Roche Limit.

What has the response to Roche Limit been like for you? Did you imagine it would be so universally acclaimed and optioned for a film?

Here’s the thing—when I pitched this to Image, I sent it along with another, different pitch. I thought the other pitch was a slam dunk, and Roche Limit was a sure rejection. Turns out it was the other way around. Since that time, Roche Limit has always been a book that has surprised me. The acclaim it’s received, from readers and critics, has been amazing—I’d never had such a well-received book before. Sales have been solid, and the movie option (which is progressing nicely—there’s some cool stuff happening on that front) is just icing on it all. To me, though, Roche Limit will always be this little existential sci-fi story that I’ve always wanted to tell, and I’m just grateful we’re able to make it to issue 14 and tell the entire thing.

How did you manage writing with a full-time job?

I have no idea. None. I burned it at both ends for years. I mean, we’re talking nearly a decade here. And now, having transitioned to full time writing and doing it for only a month, I look back and am baffled by how I even functioned. Even now, with a newfound 40 hours added to my week, I’m still buried with work. But the thing is, my story is not an uncommon one. Countless artists do the same thing for just as long if not longer, doing whatever they can to make their art. I have a very, very keen awareness of how lucky I am to have gotten to this place, and I’m grateful to be here every day.

What’s it like being a comics writer in Chicago (as opposed to New York)?

Chicago has the best comics community in the world. For real. There’s so many terrific writers and artists here, amazing fans, and our comics retailers can’t be beat. We’re overwhelmed with a gluttony of riches when it comes to talented, hard-working people who love comics—and this is the Midwest, so everyone’s nice!

And that community is so incredibly crucial for making it as a comics creator. You need peers to prop you up, you need retailers to support your work, you need readers to keep you going. I don’t know if I would be nearly as successful without this community.

What can you tell us about your upcoming SF novels for St. Martin’s?

Unfortunately, not much. I can say more or less what the press release said—it’s a sci-fi adventure series inspired by Star Wars (my favorite thing of all time); two books are under contract and, if all goes right, I’ll be writing in this universe for a long time. I’m currently writing the first book, and the plan is to have it released in 2017. I honestly couldn’t be more excited—this is literally a dream come true, and I’m insanely lucky to be working with an incredible editor in Marc Resnick and for a terrific publisher with St. Martin’s.

Do you have any future comics projects planned? Will Monadic be your last foray into the Roche Limit universe?

I’m always working on new stuff—I can’t stop even if I wanted to. I come from a blue collar, Teamster family, so working double time is in my blood. Plus, I just love making new stuff. As for specifics, I have a couple comic pitches in various stages of preparation, and I had one that was just announced this week—Indoctrination. It’s a crime/horror book that’s a blend of True Detective and Se7en (though my publisher says it reminds him a lot of Sicario, which I’ve yet to see). The series follows two FBI agents as they track a killer in America’s southwest; to aid their efforts, they enlist the help of an incarcerated man who has deep ties to the suspected murderer—and may have been indoctrinated by him. It’s dark, it’s raw, it’s a little political, but I think it’s going to be something complete unique from so many other comics out right now. Anyone can learn about it here and get a free preview.

As for Roche Limit, I suppose you never say never, but I’ve said it was a trilogy from the start, and I’ve had a really specific plan in mind for the series. These last issues bring what I wanted to do together in, to me, a satisfying way, and I think I’m content to leave it at that. I’d have to be really, really compelled to do more.

Hmmm…well, I’ll always love the very first issue. But I think Clandestiny #3 might be my favorite. It really hits on some of the best parts of the series, and Kyle’s art is absolutely killer.

There’s too many great shops to have a favorite, but the ones I frequent most are Challengers, Third Coast, and Aw Yeah. Great people behind those shops, like so many shops in Chicago.

Note for our Chicago readers: Moreci will be at C2E2 this weekend. Visit him in booth D1.