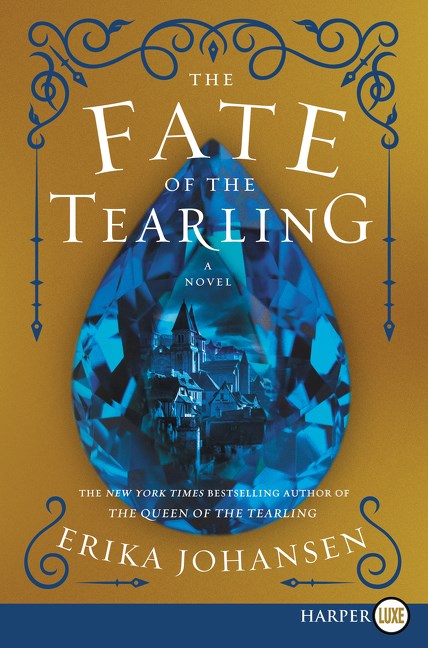 As November ticks away towards winter and we look for the right stack of books hunker down with,  The Fate of the Tearing is a good place to start. It is binge-worthy high fantasy—perfect for those long winter nights when you don’t want to leave your couch blanket nest.

The Fate of the Tearing is the conclusion of the Queen of the Tearling trilogy, by Erika Johansen. The story takes post-apocalyptic literature and uses it as a vehicle into high fantasy. A few lucky ancestors escape a future world of horrific debt, poverty, and inequality and go to “the better world,” in a moment that is later referred to as The Crossing. However, the “better world” falls to pieces and reverts to feudalism due to a lack of technology.

The story centers around 18-year-old Kelsea Glynn, the newly crowned queen of the Tearling. In the first book of the trilogy, Kelsea discovers that their rival nation, Mortmense, hasn’t invaded because former rulers of the Tearling sent monthly shipments of peasants to be sold as slaves, as a tithe to appease their large neighbor. Quick tempered Kelsea immediately stops the shipments once she discovers the practice. Thus, the Tearling and all of its people find themselves suddenly vulnerable for invasion by the infamous Red Queen and her massive army. The second book concluded with Kelsea surrendering herself to the Red Queen. The third begins with her on the road to a dungeon deep in the center of the Mortmense capital.

In her absence, the queen leaves her captain of the guard in charge. Mace—aptly nick named for his skill with a mace—has a great back story and complexity of his own. But that is put to the side as his regency faces unrest throughout the Tearling. Corruption reigns among the church and the noble class, a terrifying black market thrives, and other problems linger throughout the kingdom. On top of it all, Kelsea’s grief-stricken followers are left scrambling to find a way to rescue both Kelsea and her kingdom from total destruction.

Johansen now calls the U.K. home, but she trained as an attorney and received her MFA from the Iowa Writer’s Workshop. Perhaps this is why the trilogy pays such a wonderful homage to the power of good books. Kelsea herself treasures a worn copy of Lord of the Rings. The illiterate captain of the guard is given reading lessons with Roald Dahl. Copies of the Bluest Eye and Something Wicked this Way Comes make appearances as well.

While earlier reviewers have compared the trilogy to The Hunger Games and Game of Thrones, there are also noticeable bits of other influence from The Handmaid’s Tale, Outlander, The Giver, and The Martian Chronicles. Johansen not only presents us with characters we willingly invest in, but also a nuanced plot and complex ideas. Thankfully, she avoids falling into the stereotypes of the Iowa program; she never tries to copy Raymond Carver or give us a coma inducing character study. Instead, she gives us high fantasy well worth reading.

There are only two flaws in the The Fate of the Tearling and the trilogy as a whole. In the second book, Kelsea transforms—with the help of magic, of course—from a chubby plain teenager who huffs and puffs her way through fencing lessons into a graceful beauty. From then on, a multitude of characters comment on her appearance and outward beauty relentlessly throughout The Fate of the Tearling. This preoccupation with her looks gets a little tiresome. Perhaps Kelsea’s transformation is due to the fact that  Emma Watson of Harry Potter fame has signed on to play Kelsea in a screen adaptation of the series. Although Watson is undoubtedly a role model—great actor, beautiful woman, avid reader, fierce feminist, advocate for human rights—it would be nice for girls to believe that they too can conquer, possess desirability, and rule their own fates without perfect looks. For once, let’s have a queen of a different waistline.

The second flaw is that The Fate of the Tearling is over too soon. In the intermittent flashbacks to The Crossing and at the end of the novel, Kelsea and other characters play with time itself. She is warned that doing this may save her people, but it will also have difficult and unexpected consequences. At the end of the book, we find her heartbreakingly alone. It is almost hard to forgive Johansen for giving Kelsea that option. I found myself thinking—I just spent three books deeply engaged with these characters and now I have to live with them irrevocably changed forever?

I am tempted to dub this authorial move a cop out or a worn trope. Once again, we see a strong woman in power suffer simply for making the right choice. Yet, just as Frodo leaves for the Grey Havens because the Shire is no longer home by the end of his story, perhaps Kelsea too can never go back. A tidy end would be forced and over calculated. When we finish a good book we are forced to leave a world and characters that became our own. In a way, Johansen poignantly presents us with that harsh yet inevitable reality of fiction: while those worlds make us more interesting people, they also leave a bittersweet loneliness which, however brief, have sharp stings that linger.

The Fate of the Tearling by Erika Johansen

Erika Johansen grew up in the San Francisco Bay area. She went to Swarthmore College, earned an MFA from the Iowa Writers’ Workshop, and eventually became an attorney, but she never stopped writing.