Maybe you’ve heard the adage inviting you to walk a mile in someone’s shoes before you judge them. Taken literally, the phrase suggests that walking is the physical key to gaining understanding of others—and ourselves. Ben Shattuck puts that to the test in his debut, Six Walks: In the Footsteps of Henry David Thoreau. Reeling from another nightmare about his ex-girlfriend, Shattuck took a shower and, as the water washed disturbing dream scenes from his mind, imagined Thoreau smiling on the beach. Without considering consequences, Shattuck packed bread, cheese, and the copy of Cape Cod he had been reading into his backpack, then set off to recreate Thoreau’s 1849 walk along the Cape. Six Walks is the moving account of Shattuck’s journey to find peace by undertaking six of Thoreau’s nineteenth-century walks: along Cape Cod, up Mount Katahdin and Mount Wachusett, from Massachusetts to Rhode Island, through the Allagash, and then, a few years later, back to the Cape.

Shattuck’s initial walk on Cape Cod was a far cry from Thoreau’s. He was much less prepared, and the icy wind of that cold May morning stung his legs beneath the swim trunks he had chosen to wear on the beach. His duct-taped running shoes fell apart within the first mile of trudging through sand, and he didn’t bring sunscreen or a sleeping bag in which to spend the night. Shattuck didn’t find the absolution he was seeking, either; when he located the house where Thoreau stayed on his own walk down Cape Cod, Shattuck “felt no sense of transcendence.” He did, however, walk until he was too tired to dream. He saw a whale break through the surf and gulls dance on the breeze. Strangers offered him a place to stay so he wouldn’t have to spend the night on the beach. Because Shattuck felt bolstered by this experience, he returned home certain that if he followed further in Henry’s footsteps, he would discover “hidden, unexpected goodness.”

Shattuck first encountered Thoreau during a snowed-in Massachusetts winter. In “Interlude III,” my favorite section of Six Walks, Shattuck rewinds a few years to one of the coldest freezes in Massachusetts since 1918. He had recently lost the tip of his middle finger when, carrying his boat across the icy ground, the boat slipped and tore it off. Struggling with phantom pains in his hand and “failing to enjoy almost any part of television and without the attention span for novels,” Shattuck turned to Thoreau’s The Journal 1837-1861, which he had received from his father at Christmas but avoided, “remember[ing] Thoreau as a boring, possibly chauvinistic writer who’d lived beside his mother and grew beans as if he were Aristotle.” In his desperation to stave off cabin fever and despair, however, Shattuck turned to Thoreau’s winter entries. He was curious to “see how [Thoreau] might better describe these weeks that I was finding more and more painful to endure.” And he was surprised to find comfort, even kinship, with the writer who asked, “Is not January the hardest month to get through?”

That sense of kinship prompted Shattuck to read Cape Cod, the volume that inspired his first walk, and this book. Shattuck recounts how Ed Hoar, one of Thoreau’s longtime friends, depicted Thoreau in perpetual motion, remembering that the only way to really be with Henry was “to go with him in his walk; to walk long and far; to have wet feet, and go so for hours; to pull a boat all day; to come home late at night after many miles. If you would do that with him he would take you with him.” The only way to connect was to keep pace—not on a stroll through the neighborhood but on a strenuous hike through the woods. If you were willing, Thoreau would invite you to immerse yourself in the natural spaces he moved through and documented in his work. Though Shattuck undertook his walks nearly two centuries after Thoreau, he, like Hoar, came to know the transcendentalist writer better as he walked. Shattuck also developed a deeper understanding of the New England flora and fauna and his own life and motivations.

An experienced painter whose work has hung in exhibitions across the northeastern United States, Shattuck documented the people and places he encountered in lovely pencil sketches that punctuate his prose. He admits that, on his first walk down Cape Cod, he took a notebook—not because he journaled or sketched, but because Thoreau did, and he wanted to “try someone else’s habits for a few days.” Shattuck’s sketches became an additional way to appreciate nature. When he paused to draw a bullfrog, for example, Shattuck noted that “it’s hard not to feel special when a wild animal lets you gawk.” This moment of mutual observation feels meaningful because “the animal might be seeing you, not as a generally hazardous human, but as an individual. [. . .] Maybe what I want when I go out into nature is not to see it, but to be seen by it. To receive anointment.”

When Shattuck returns to Cape Cod for the last of his six walks, he is accompanied by his fiancée, Jenny, who is pregnant with their first child. Whereas Shattuck set out on his first walk struggling with recurring nightmares that made it difficult to sleep, he now snuggles with Jenny in a cabin, where they eat spaghetti and wake up beneath a blanket of fog. The transformation Shattuck experienced from his first walk on Cape Cod to the second, years later, is the result of his journey in the footsteps of Thoreau. Six Walks witnesses how, in every season, choosing to step into the natural world can lead to healing and peace. 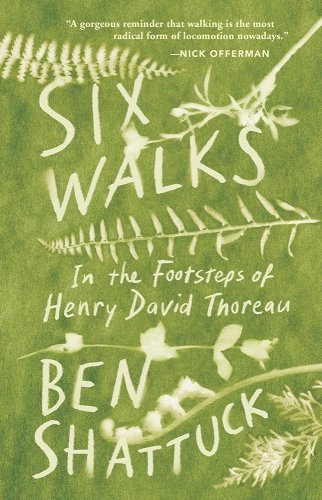 Morgan Graham is an English PhD candidate at the University of Minnesota. She is Managing Editor at Pleiades and has published work in Colorado Review, Great River Review, Split Lip Magazine, The Evansville Review, and Salt Hill Journal. Find her at morgandianegraham.wordpress.com and @morgraha on Twitter.