From the beginning of recorded history, there’s one thing we’re all certain about: one day, this is all going to end. “I am writing this book because we’re all going to die,” says Kerouac, in Visions of Cody, a eulogy in book form to his friend Neal Cassady. But in a sense, all books are about this inevitability in some form or another. Of course, exactly what kind of ending is up for debate. From the end of a relationship, to the end of a life, to the end of existence itself, countless artists have used writing as a means of conveying this, saying “This is what was important to me, as I remembered it. Maybe you’ll remember it now, too.”

Now, through the rapid collapse of the environment as a result of climate change, we’re facing one of the most credible threats to life we’ve experienced. In The Forests—the latest novel from Sandrine Collette, translated from the French by Alison Anderson—Collette adds her voice to the growing pool of fiction meant to grapple with this unfolding catastrophe, with a key twist: the disaster has already arrived. Corentin—a lonely man from the Forests waiting out the ever-hotter days in the Big City (the book is rife with these Sci-Fi-esque Capitalized Nouns) with his new university friends—manages to avoid the day it all finally comes down through an event only ever referred to as The Thing.

Not much more is explained about The Thing—where it came from, what happened—and really, what does it matter? All that Corentin is left with is the new reality. He and his friends emerge from their underground party to a world of scorched earth and ashen remains. It’s a scene that suggests nuclear fallout, though as mentioned, no concrete explanation is ever given. Soon thereafter, these friends all scatter to the wind, leaving Corentin in the state he’s most familiar with: alone.

The book opens by chronicling Corentin’s sad life to this point. He’s born out of an affair, and then his mother Marie is almost immediately left alone with young Corentin, and she proceeds to try and dump him off on anyone who will take him in for any length of time. He passes from house to house, finding temporary respite in the company of a group of children and their single mother, but this too abruptly ends as Marie comes to collect Corentin to punish him for simply having become settled. His next stop is his last, to the eponymous Forests, and into the care of Augustine, his great-grandmother. There, he does find some comfort at last, among the simple life Augustine leads, even making a few friends among the neighborhood children, and developing a crush on Mathilde who is two years his senior.

So when the world’s end finally comes and his friends leave Corentin behind, he decides to return to the only place he can, the Forests. It’s a plot that draws not-superficial comparisons to Cormac McCarthy’s The Road, though the journey Corentin makes is only a small portion of the novel. The trip suffers from the same condition that plagues the rest of the novel: it’s all of little consequence. Things happen to Corentin, he makes a few decisions, but they never quite precipitate into something more. He travels briefly with a man who manages to get a car running, despite missing tires, and they roll on the rims until it runs out of gas, then part ways unceremoniously. He comes across a pack of puppies which he takes upon himself to put out of their misery, sparing only the blind runt—of course—whom he names simply “Blind Boy” and carries along the path. It’s briefly unclear if Augustine would’ve survived the Thing to be there to greet Corentin, but despite her unlikely endurance and his successful trip, there’s still no homecoming for him. He soon slots himself back into life in the Forests, as Corentin’s old crush Mathilde has assumed the role of caretaker for the aging Augustine.

Survival looks a lot different in the aftermath of The Thing, even compared to other post-apocalyptic novels, as whatever disaster has transpired has left the Earth in nearly as lifeless a state as can be imagined. No plants survive the initial trauma, and the minimal remaining animals are only felt rather than witnessed (no thanks in part to Corentin snuffing out those pups along his path). Instead, Corentin’s small band relies entirely on food scavenged from the nearby Little Town for sustenance, rather miraculously building up a store of just over two years of food scrounged up only after the disaster has already occurred.

The Forests is a sporadic novel, going from sad bildungsroman to apocalyptic road trip to apocalyptic homesteading novel, never settling in one place in a way that would feel almost in-character, if there were more behind it. Even time ebbs and flows here, from a summary of Corentin’s childhood and collegiate life, to more detailed exploration of his first experience of contentedness and his long walk along the road; ending with a single climactic moment where a few seconds seem to last an eternity, but because of the stakes, is among the novel’s most compelling.

Even the writing suffers from a similar disparity: poetic depictions of a life devoid of life give way to the sort of ham-fisted climate exposition that seems to plague every “cli-fi” book. In general, the writing can be pretty awkward at times, but that feels more like Collette’s doing than Anderson’s. In the wake of the collapse, there are also a few assertions of traditional gender order which feel out of place in a world lacking society. To those ends, Corentin forces himself on Mathilde under the pretense of repopulating the Earth. While children do add a new complexity to the novel, it never fully reckons with how they came about.Collette has seen the disaster around us, and decided to get on with it. But by fast-forwarding the slow collapse with a few swipes of her pen, she’s lost a lot of the weight that comes with the fall. The Forests is simply a little too thin to hit hard. Characters feel more like accessories rather than fully-realized people with their own agency, and the way they relate to one another feels mostly unbelievable. This is a book filled with moments that seem designed to shock: rape, puppy euthanasia, depictions of potential atomic fallout; but what’s most shocking is how little it managed to stir me at all. I don’t consider myself cold—I’ve been moved to tears by cartoons before—but despite all the charged moments, The Forests ends up feeling more like the student film that leans into trauma than an opera of serious consequence. While the novel has moments that suggest a hidden depth, it never seems interested enough to properly explore them. Instead, what we’re left with is mostly barren. 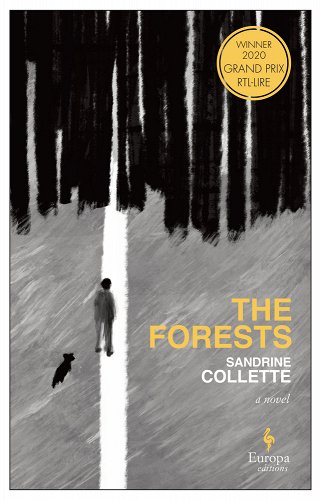 Ian is a writer based out of Chicago, and one of the Daily Editors at The Chicago Review of Books. His work has appeared in The LA Review of Books, Input Magazine, The Kenyon Review, Chicago Reader, among others. He is working on a novel. Follow him on Twitter as @IanJBattaglia.