Escapes and Discoveries in “Manywhere”

John Darnielle’s latest novel, Devil House, is a fascinating hybrid of gothic horror, the true crime format, and something stranger. It’s keenly attuned to how people change, how we bring our pasts with us, how the spaces we enter shape us, sometimes unexpectedly, sometimes violently. The novel is intensely (if circuitously) invested in the condition of narration—who is speaking, why are they speaking, what are they getting out of it? It’s a picture of someone refusing to tell a story they’re already committed to tell, that they’re complicit in and profiting from. While I expected bloody twists and turns, the kinds of twists and turns this novel threw at me were intoxicating.

The novel is narrated—mostly—by Gage Chandler, a true crime writer undertaking an ambitious new project. Digging into an unsolved double murder from the height of the Satanic Panic in southern California, Chandler buys the house the murders were committed in and begins to work: recreating the scene, conducting local interviews, collecting artifacts. He clearly takes pride in his “method”—part investigation, part writerly ritual—and the novel initially reads as just an unusually lyrical mystery. But, as the story unfolds, it gets murkier, bringing in other voices, questioning its own narrative.

Devil House sits in a strange place, genre-wise: horror-adjacent, full of sympathy and insight, overflowing with cryptic references and narrative culs-de-sac. With the novel’s mix of Satanic imagery and quasi-Arthurian fantasy, one might expect to to see Darnielle leaning into Dungeons & Dragons or heavy metal, themes he’s explored in previous novels and in his music (Darnielle is singer/songwriter of the band The Mountain Goats). Instead, Devil House is suffused with atmospheric setting and character work and, in one of its least-explained and least-explicit gambits, oblique references to medieval history. “Chandler” of course calls to mind classic hard-bitten detectives—that “Gage” can be read as either “to measure” or “bullet size” is a nice touch—and he anchors his story with litanies of real murders and, often, their sensationalized true crime retellings; the novel is set in the same town as The River’s Edge and the murder that inspired it.

Early in the novel, I was really struck by the confidence of Darnielle’s narrator. Chandler has impeccable bedside manner, a soothing presence despite his gruesome subjects. He is also masterful at sketching out characters with deep sympathy, at capturing ambiance and group dynamics, and never fails to keep his own voice present, a personable tone anchoring unsettling stories. It’s an effective and enjoyable technique for a true crime narrative; what I absolutely love about Devil House is the way Darnielle is playing with that. This is fiction, not true crime, despite its use of the format and its many references to actual cases. Devil House focuses on that distinction; more than that, the novel is feeling its way, quite emotionally, around the ethical quandaries inherent in telling stories about real people and events.

Chandler’s calm, contained narrative is not so much broken as revealed to have always been broken as the novel progresses. The four teenagers at the heart of the Devil House murders become ever more clear, even as the case gets blurrier. More and more voices join the narrative, some framed by Chandler, others just injected without explanation: one of Chandler’s childhood friends, a letter from a bereaved mother, strange excerpts from medieval fantasy. Coming after and interspersed with Chandler’s masterful performance, these narrative shifts are exhilarating, unsettling, and at least as much of a thrill as the mise en abyme mysteries and murders. The effect is like one of Hitchcock’s dolly zooms: the novel’s subjects stay uncannily in focus, even as it seems like they ought to be getting closer or further away. You can practically hear the strings.

It’s a heady, thoughtful piece of metafiction, something akin to Mark Z. Danielewski’s House of Leaves or Nick Harkaway’s Gnomon: there are wild and disturbing narratives here, but what’s even more interesting is the way they’re layered and interwoven and the way they sometimes contradict each other. And, while horror is always lurking on the edges of the page, the novel keeps its cases “real”—haunted the house may be, and Chandler’s breakout book was on the “White Witch” murders of his hometown, but there’s no hint of the supernatural at play. But I couldn’t entirely get Shirley Jackson out of my head while reading this: Devil House, not sane, standing by the freeway, darkness within.

As a songwriter, Darnielle often creates metaphors that are so complete, so detailed, that the actual referent is left to the listener to determine. (In a Song Exploder episode, expounding on a song about another grisly crime scene, Darnielle says that “there’s nothing in that that can telegraph to you that what I’m thinking about is a relationship where there’s nothing left to save.”) Devil House is that technique in reverse: a meditation on how true crime is an act of metaphorizing real events, of making comprehensible, consumable, and thus unrealistic narratives out of tragedies that will always be too personal for a few, and too impersonal for everyone else. Chandler is haunted by the stories he’s written up, and by the one he’s researching, a feeling that increasingly undercuts the smooth true crime narrative and the understated pride in his method. In a strikingly direct question to the reader, he asks, “What happens when somebody tells a story that has real people in it? What happens to the story; what happens to the teller; what happens to the people?”

Devil House is, in part, about fantasies, the act of fantasizing: troubled teenagers creating an imaginary castle, the images we construct of ourselves, the way the media industry packages up events for our consumption. The way that our idea of our past selves, even of our current selves, is a kind of fiction. Darnielle brings an astonishing mix of subtlety, sympathy, and ruthlessness to the question. Devil House is thus an anti-fantasy, prodding at the problem of these dreams like a tongue on a sore tooth. (“Who,” Darniele asks in the liner notes to one of his albums, “can even say the word ‘fantasy’ without flinching?”)

The novel is very much about the possibility for art to carve out a place of refuge, but also the possibility of storytelling to distort and exploit. More than that, there’s a whiff of cosmic horror here, the Lovecraftian, the feeling that there are facts that are literally maddening out there in the dark. Part of Chandler’s swerve away from commercial true crime is a desire to shield, to use his craft to deflect the truth rather than cut into it; part of the novel’s pathos is that it’s not clear if this strategy can work.

But there’s no question that Darnielle’s strategy works, and profoundly so: layering stories and ideas, so that I was constantly both immersed in the story to hand and wondering about the story up or down a level. How does the Devil House murder play out? What is actually going on with Chandler? How do the White Witch and the other stories fit into this? Because we’re constantly invested in other parts of the story, there’s a deferment of disbelief that lends an incredible vividness to whatever section is currently before us. And even as the “facts” of the story grow stranger, more tenuous, the humanity of its speakers and characters shine through. Crime-thriller hooks, emotional and philosophical reflection, and one of the most subtle and devastating endings I’ve ever read: Devil House is a novel I know I’ll be returning to. 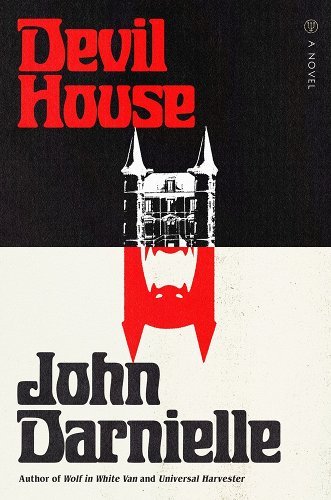