Contemplative Questions in “One Friday in April”

In their new novella, Nothing But Blackened Teeth, Malaysian author Cassandra Khaw delivers a fresh new twist on the haunted house tale. Cat, a Malaysian student of Japanese literature and an empath, has just emerged from six months of voluntary commitment in a psychiatric hospital for suicidal depression. Not yet reacclimated to the world outside the hospital, she is invited to Japan for an all-expenses-paid destination wedding at a Heian-era mansion said to be haunted by the ghost of a lonely bride.

There she joins four friends with whom she has an emotionally complex past. Two of Cat’s ghost-hunting friends have decided to have the morbid wedding of their dreams, and a wealthy member of the group has used his family’s money for temporary (and illegal) access to the abandoned mansion. While most haunted house stories follow skeptical characters resistant to the idea that the house they occupy is haunted, Khaw’s characters choose their house specifically because they want to see ghosts.

Cat is haunted by the past in more ways than one. She and her friends have a history of investigating haunted sites together in Kuala Lumpur, using Cat’s extrasensory ability as their spectral entity detector. So while the other four rush ahead to explore the decrepit Japanese mansion like it’s a carnival funhouse, Cat hears the voice of the dead:

“A whisper, so quiet the cerebellum wouldn’t acknowledge its receipt. The words were drowned by the reverb of Faiz’s voice calling, an afterimage, an impression of teeth on skin. We exited the room, the future falling into place behind us. Like a wedding veil, a mourning caul. Like froth on the lip of a bride drowning on soil.”

Each member of the wedding party has a secret desire or past they guard from one or more of the others and Cat’s raw nerves pick up on the slightest concealed sentiment, such as resentment in her ex-boyfriend’s tone. She also notices that hidden under a veneer of civility, the bride still harbors an inner hostility toward her for having once disapproved of the union they are all there to celebrate. It’s easy to see how having such a gift of emotional perception could lead to Cat’s struggle with depression. In one conversation where her ex feels slighted by the harshness of a truth she has told him, she corrects him with, “Your ego wounds you. I was just its instrument.”

Rooms in the mansion are divided by a series of ornate sliding panels called fusamas, which can also serve as doors between chambers. As Cat and the other ghost hunters feast and booze on tatami mats made of decomposing straw, tensions between the five form fractures in their relationships. Khaw’s ability to dive deep in the specificity of her characters’ experiences shines here, and may have something to do with her experience with role player games. Cat finds that attending this wedding comes with emotional strings attached that feel a bit like rope bondage, minus the consent.

Decorating the fusamas are paintings of yokai—creatures of Japanese folklore. The ghost hunters are surrounded by fantastical creatures, ghosts, and demons. These include nine-tailed kitsune that look like paranormal foxes, and turtle-human hybrid kappas. The creatures’ cartoonishness occasionally threatens to undermine the scares in the book, though the voice that Cat hears in her head—that of an ohaguro bettari, the eyeless, noseless ghost of a bride with black teeth, for example—won’t disappoint readers craving horror.

The significance of the titular blackened teeth comes from Japan’s Heian period, which spanned the 8th through the 12th centuries and nurtured art, literature, and architecture. During this period, in order to emulate the luxurious black, lacquered objects of the era, royalty and aristocrats blackened their teeth, swishing around an “iron drink” of filings dissolved in vinegar, a sharp parallel to how teeth-whitening is so popular in the United States today.

Khaw is an award-winning writer of video games, tabletop role player games, and fiction, specializing in horror and science fiction, whose first novella, Hammers on Bone, was a finalist for the British Fantasy and Locus Awards. Her prose is lush and evocative, reminiscent of literary horror writers like Carmen Maria Machado, and Nothing But Blackened Teeth is a delicacy of supernatural horror garnished with blood. On a fear scale of zero to agonizing terror, Khaw’s novella lands firmly on: better keep a nightlight on tonight. 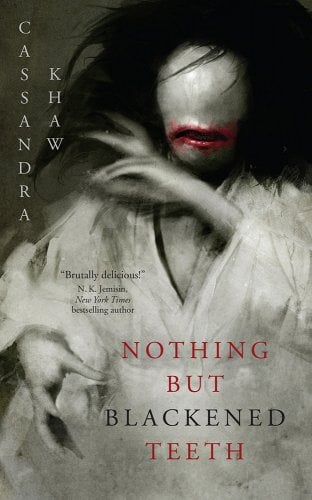