The 10 Best New Books to Read This May 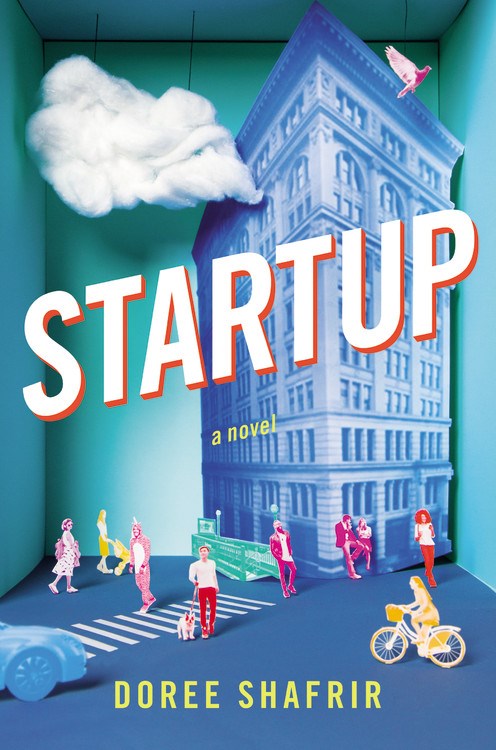 There are few industries more ripe for a send-up than the technology industry. From Silicon Valley billionaire Peter Thiel’s politics to Uber CEO Travis Kalanick’s arrogance to the spectacular failures of Theranos and Juicero, there is hardly an industry that currently deserves it more. The TV comedy Silicon Valley has satirized the tech world. Works of nonfiction like The Everything Store and Move Fast and Break Things have come at it from various angles, but the nuanced nature of the culture lends itself best to novel form, and now that novel is here.

Startup, the debut novel by Buzzfeed culture writer Doree Shafrir, has three point-of-view characters: Mack McAllister, founder of TakeOff, an app that hopes to make people happier by reminding them to take time for themselves throughout the day; Katya Pasternack, a reporter for TechScene, a startup that writes clickbait-y content about other startups; and Sabrina Choe Blum, a social media manager at TakeOff who is married to an editor at TechScene. Their lives come together at a party which Katya and Sabrina are both attending less than happily. Sabrina’s boss, Isabel, stops to talk to them, and forgets her phone when she walks away. It vibrates, and a message from Mack appears: three pictures of his erect penis with the text “don’t tell me u don’t miss this.”

Katya grabs the phone and says she’s going to give it back to Isabel, which she does, but not before taking a picture of the screen. This sets off a chain of events that intertwines them all.

The sections told from Katya’s and Sabrina’s points-of-view are the most illuminating of tech world culture, but the novel is most chilling when narrated by Mack. Every woman he sees is filtered through his “would I have sex with this person?” lens. These passages grow increasingly skin-crawling as Shafrir shows the myriad ways this kind of thinking can impact the work environment and interpersonal relationships.

She also demonstrates how men sometimes fail to understand those impacts. For example, when Katya tells her boyfriend what she saw on Isabel’s phone, his reaction is to shrug off its significance:

“What are you talking about. He sent her dick pics while she was at Andrew’s party. After she and Andrew had started seeing each other. I mean, clearly she didn’t want them. How is that not bad?”

“No. I want to know why sending a woman unsolicited dick pics is not that bad. Really, enlighten me. I’d like to know.”

“You wouldn’t understand.” She stared at him. “I mean, you don’t know that she didn’t want them.”

She is, of course, upset by this and leaves. As for the boyfriend, the comment has personal consequences, but not professional ones–he gets a career boost from Andrew.

Though far from a polemic, Startup carefully constructs a portrait of tech industry sexism. On occasion, Shafrir turns toward issues of ageism and racism, but they’re given proportionally less space.

Shafrir’s writing is propulsive, and the book is well-paced. The constantly rotating perspectives effectively build tension, and each one is compelling, empathetic and frustrating in different ways. At times a point-of-view switch requires a chronological move backwards, and that can be a little disorienting.

The novel also, ironically, sometimes struggles with addressing technology’s imposition on the characters’ day-to-day lives. While there are text messages that interrupt face-to-face conversations at inopportune times, Startup doesn’t deal much with Twitter outside of the work place, or with how Mack’s TakeOff app–which is designed to interrupt people at work to encourage short breaks–operates. Few novels have captured the constant and often one-sided interactions many people have on Instagram, Twitter, Facebook, and elsewhere. Startup begins such an examination, but these platforms remain largely invisible, creating an absence that doesn’t jibe with the world Shafrir has created.

Shafrir’s subject matter is one that many are fascinated with, and her perspective is significantly less myopic than those in other prominent and similarly-themed narratives, like HBO’s Silicon Valley or Dan Lyons’ close-minded and occasionally whiny Disrupted.

Startup is a promising debut novel by a writer with an excellent grasp on social and political issues within an industry riddled with almost as much conflict as innovation. It’s also a smart and fun book, addictive enough to be read in a weekend and deep enough to be talked about for much longer.

DOREE SHAFRIR is a Senior Culture Writer at Buzzfeed, where she covers tech culture. Her writing has appeared in the New York Times, the New Yorker, Slate, the Awl, Daily Beast, Marie Claire, and Wired. Startup is her first novel.