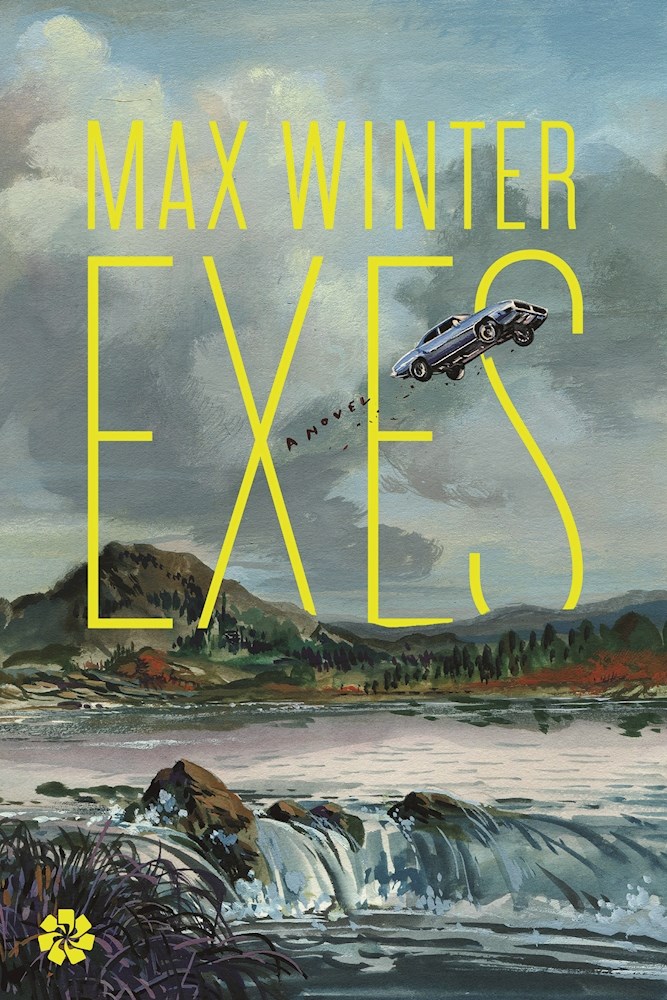 Max Winter’s Exes is marketed as a “novel in fragments,” but I found “a profound study in grief” a more accurate label, and I mean that in the best way possible. Our protagonist Clay Blackall walks us through his hometown of Providence, Rhode Island, the backdrop for all that unfolds in this deceptively plot-less book. His younger brother Eli has recently committed suicide, and Clay scrambles to make sense of why, along with the backpedaling that accompanies feelings of regret and trauma when a loved one is lost. With a description like that, it might be hard to believe that the prose is often lighthearted and funny, the characters self-deprecating, and the setting comical in its unchanging ways.

The story opens with Clay getting kicked from empty place to empty place, not having the cash to pay rent anywhere, and eventually finding himself breaking into Twinrock, a single bay house on a rock in Narragansett Bay. It is here that he begins to recount memories of his brother, finding letters from Eli’s exes, caretaker logs from old acquaintances, and even a scandalous salutatorian’s speech.

The novel is told from alternating points of view, Clay taking the microphone back after each new character gets a chance to tell their tale. First we hear from Vince, a lonely, washed-up actor who once slept with Alix (“say her name with a couple of e’s in the middle and an x that sounds like s, then a silent e”), the girl who broke Eli’s heart. Through Vince’s letter, we are given the first look at this mysterious Alix and what it is about her that must’ve captivated Eli. And though Alix is the focus of this section, it is hard not to come to care about Vince and his own desperate attempts at making sense of life.

The next section is a bit jarring in form: Clay begins annotating these collected bits of stories, footnotes in the form of chapters. It’s a story within a footnote within a story, but it works. Once you shake yourself free of the discomfort, the structure opens up an entirely new dimension to Clay’s character: here we see him clawing at even the most meager of scraps in the hopes to better know his brother. Though the footnotes are meant to be asides and anecdotal, important mainly to fellow Rhode Islanders and those on the inside of inside jokes, Eli frequently pops in as a young boy or troublesome citizen, clobbering Clay (and readers) right in the heart. They’re bittersweet, Clay’s memories, especially unexpected footnotes like this one: “I can’t believe I almost forgot about this! There’s something around every corner, under every rock. I get in my own way a lot, but I can’t stop looking.”

Then there’s Rob, a postcard child for the heroin addicts that struggle day to day to fix their lives, Rob doing so by literally fixing up Twinrock and cataloging each chore in the Caretaker’s Log. There are mundane tasks that are meant to disarm the reader, like “Weather was warm. Recemented loose steps” so that lines like “Sometimes I want to eat myself” or “Real trouble’s not something you get into or out of. It’s something you are or are not” can knock you off your feet while you’re not paying attention.

Hank recounts his widowed living while caring for a “foster” kid who is smart but wants to skip gym. Together the two concoct a way to chase geese from their lawn. Mark Slepkow is all grown up and is one of the few that travels outside of Providence, only to meet up with an old buddy from high school. The two of them compete for the better image of having a good life. Cliff Hinson finds a secret, abandoned room in a mall and lives in it while coming in and out of different highs, caring for himself and friends with little success. Viv, former best friend of Alix, pens an abstract for a period-themed short play to be performed on stage.

Slowly, through Clay’s collecting and his own annotations, the pieces begin to make some sort of sense, though in no way to do they form the answer Clay is searching for. Providence has a vice grip on these characters, building itself up in the background to become a character of its own, with landmarks and quirks unique unto itself. I found myself wondering if everyone’s fate was knotted up in the fact that they were born into this town and its unrelenting pull, and maybe that’s the answer that Clay could never find, because he is – and will always be – too close. It’s a subtle study of place as much as it is of grief – of exploring home and its ever-changing definition.

Many of the sections sound similar in voice, and while I enjoyed the cadence and the sentence structure, I would get confused about who was telling the story if I ever put the book down before finishing a section. The main pull of this book is that you don’t want to put it down, though. It is quick and witty and engaging, an intimate look into the lives of these Providence natives that are inexplicably linked by Clay and his brother Eli, even if they put little stock in their having known either of them.

Talking to Ghosts in “Passersthrough”

Many may find the “disconnected” sections hard to follow, but I found them unique and rife with magnetism. Despite taking 15 years to write this book, Max Winters is confident and powerful with his prose, and the blend of humor and gravitas is done masterfully. Prepare for the hurricane that is Exes: a single sentence will have you laughing at the start, and clutching at your aching chest by the end.

MAX WINTER is a graduate of UC Irvine’s MFA program, and a recipient of two Rhode Island State Council on the Arts Fellowships in Fiction. He has been published in Day One and Diner Journal. He lives in Providence, Rhode Island with his wife and son.