Congrats to the 2016 Chirby Award Winners and Finalists 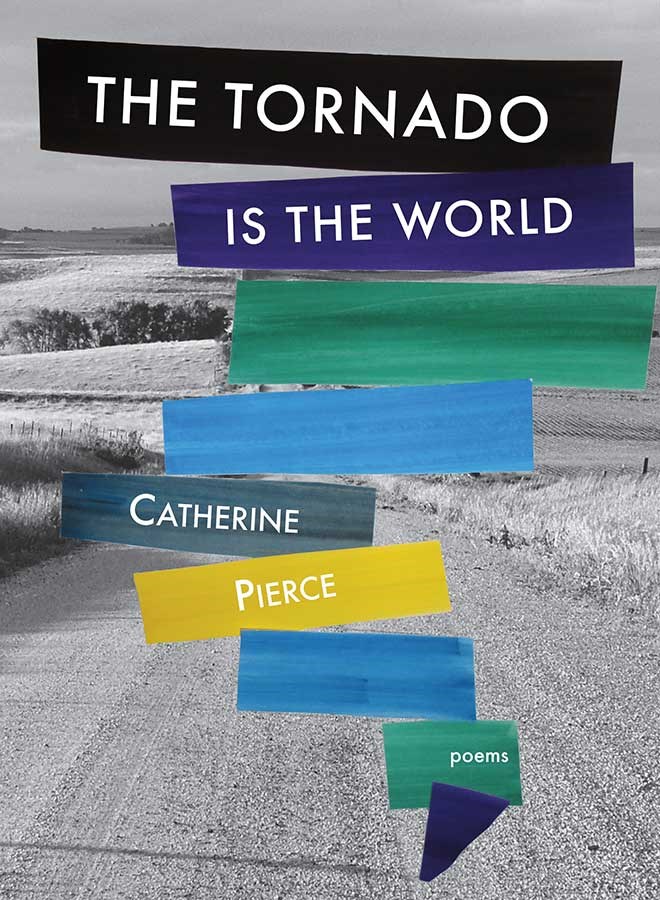 Catherine Pierce’s poignant and brave-spirited third book of poems, The Tornado Is the World, takes the reader into the midst of a natural disaster. In the poem “True Story,” the primary speaker reveals that “once, in a Days Inn bathroom in Cullman, Alabama, / I covered my four-month-old son as my husband / covered me as the tornado went by.” As the book progresses, we, as readers, find ourselves survivors in the tornado’s aftermath, grateful to be alive but unsure of how to proceed or mourn those who weren’t as lucky. We find ourselves three months into the future, looking back and knowing that nothing will ever be the same. It’s from the perspective of a survivor that this book takes form, and to be sure, only a survivor could write this kind of exposé on a tornado, though the speaker warns that “no told story is ever true enough.”

The Tornado Is the World is split into three sections, each interweaving voices from first, second, and third person perspectives. Complementing the poems that speak to and about tornados are those that examine a range of places. Consider the Imaginary Vacation Scenario series. In these poems, the speaker takes us by the elbow and leads us into a series of would-be vacations: enjoying solitude on the New England coast, backpacking in Europe, looking out over the water in the Caribbean, hiking “up the dark / mountain into the darker pine.” These scenarios aren’t merely playful interludes (and they do play) between more sinister poems; rather, their function is calculated, exacting—they have their own high stakes. For example, in the imaginary vacation set in New England, the speaker admits near the end, “You want nothing, and have it. In the cottage you are / utterly assured. You know what the end will be.” Part of the allure of taking one of these vacations is more than the experience of exotic locales—it’s having the ability to know the future and control one’s fantasies. These fantasies flourish and triumph on the page, eluding those of us who remain marooned in the land of the living.

The second series is a group of persona poems that introduce us to various “unabashed tourists” in different locations around the United States: New Orleans, Ocean City, Reno, and the state of Tennessee. Reminiscent of Edgar Lee Masters’ Spoon River Anthology, these poems construct a distinctive voice, a complicated persona that simultaneously desires, reveals too much, and longs to interact more completely with the people, landscape, and language of his or her vacation spot. The final poem in this series brings us back to the storm as the persona taunts the reader and the tornado: “It’s thrilling, isn’t it, the siren’s howl?” This line not only returns the reader to the focus of the book—the tornado–it also underscores the tone of the collection as a whole, which is daring, hungry to fight, and even playful.

Another layer this book seeks to uncover is the destruction of the tornado, from a singular first person’s point of view as well as from the voices of other tornado victims, a complicated construction that points readers to both the magnitude of the event and to the idea that every storm creates a shared story best understood through a series of connected narratives. For instance, there’s the mother who warns the tornado:

If you come down here, I will teach you about

greed and hunger. I will slice you into palm-

sized gusts. Then I will feed you to yourself.

Another poem is told from the perspective of a teenage girl driving home after a sexual encounter, having lied to her father about her whereabouts. On her way home, she finds herself in the path of the tornado. In the poem, “The Dog Greets the Tornado,” a storm narrative emerges from an animal who must speak from his instincts alone:

to your great tail. You are larger

than the truck that takes me

to the woods and back. You are larger

than the house I sometimes go in.

I see you coming close. I am blown

back on myself. My teeth buzz.

These voices create a polyvocal trajectory for the book, suggesting that this collection of poems isn’t merely one mother’s story but also the story of the smug tourist in Tennessee, of the teenage daughter, of the dog, of all those who find themselves in the path of the storm.

Additionally, the speaker constructs an intimacy with the storm itself by personifying the tornado, giving it a gender (he/him), a history, a personality, a memory. The poem titled “On the Origin of the Tornado” muses that in his past the tornado “was a young man being pulled along / by the Missouri River while his friends / laughed.” The poem later reveals the fate that turned the tornado into a villain:

…No one likes being taken

for granted. So the tornado became

the heavy class ring on a bully’s finger,

Thrills with a Pointe in “The Turnout”

The tornado was the Kool-Aid

to which the cyanide was added.

In the poem “The Tornado Knows Itself,” we find that the tornado is self-aware, aware of its victims, that it “… is moved by how / you try to explain it. So Biblical, / so romantic….” In “The Tornado Visits the Town,” we learn that the tornado has freewill—that it “… cannot stop. Will not.” By turning the funnel into a viable, cognizant creature, Pierce suggests that it’s possible to defeat it—and by extension, the pain suffered by its victims. Survival and personal strength are two consistent themes in this moving and daring collection of poems.

This book not only grapples with the reality of natural disasters but also how to negotiate a normal life in the emotional chaos of a storm’s aftermath. Pierce poses existential questions: Once death has knocked at the door, how does one not see death everywhere? The poems that take on fear more broadly evoke the same level of poignancy as the ones that face the tornado head on. The primary speaker comes to number all the ways that she’s been lucky against all odds: “Sometimes / I feel like I’ve been overlooked. Checks / and balances, and I wait for the tally to be evened.” While the tornado can be warned, wrangled, personified, and—at least on the page—defeated, a deeper fear will always linger and rise to the surface, a representation of the tightrope a survivor walks in the liminal space between those who didn’t make it out alive and those who didn’t experience the disaster at all. For this speaker, though, this fear, this constant uneasiness must be abated, at least partially, because if not:

How could you do the impossible work

of putting your child to bed,

In the end, these poems resonate. The voices may shake, plead, and for a time sound lost to the world. But they remain true to their identities and values. They find a path to survival, to doing the seemingly impossible task of moving on, and in so doing, remind readers to do the same.

Catherine Pierce is the author of three collections: Famous Last Words, Girls of Peculiar, and The Tornado Is the World. Her poems have appeared in The Best American Poetry, Slate, Boston Review, and Ploughshares, and other places. She teaches creative writing at Mississippi State University.