“Drawing the Last Page was a Nightmare”: Hellboy Creator Mike Mignola at C2E2 2016 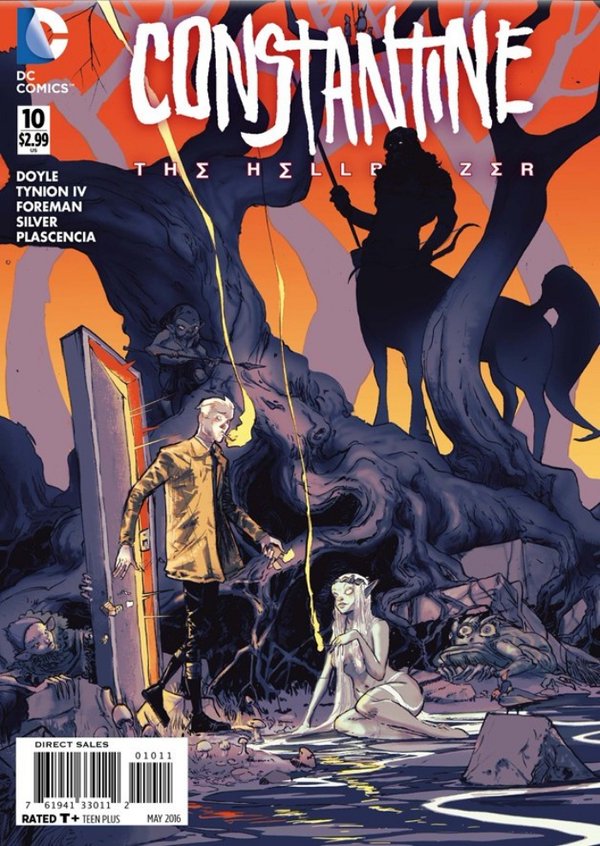 Even if you’ve never opened a comic book, you probably know John Constantine. Co-created by Alan Moore (Watchmen, V for Vendetta) in the 1980s, John’s a cynical, chain-smoking occult detective in a trademark trenchcoat, star of Vertigo’s Hellblazer for 15 years before moving over to DC Comics in 2013.

Warner Bros. attempted to kickstart a film franchise in 2005 with the criminally under-appreciated Keanu Reeves vehicle, Constantine, but critics didn’t get it (particularly Roger Ebert, who put it on his “most hated” list). More recently, NBC adapted the character for television, then canceled the low-rated series 8 months later.

Luckily, John Constantine lives on in DC Comics’ Constantine: The Hellblazer, which was relaunched last year with a brand-new creative team: writers Ming Doyle (The Kitchen) and James Tynion IV (Batman), who simultaneously took the character back to his wisecracking, bisexual roots while injecting the series with a light-hearted, contemporary style and tone. 10 issues in, Doyle and Tynion’s take on Constantine is easily one of the best (and funniest) in the character’s 20-year history—a brisk, talky mix of one-liners, literary allusions, ghosts, and demons, set in atmospheric British libraries, nightclubs, and pubs.

This weekend, co-writer and illustrator Ming Doyle will be in Chicago, speaking on panels and signing autographs at the three-day pop culture convention, C2E2 (Chicago Comic & Entertainment Expo), along with hundreds of other writers, artists, and actors, as well as tens of thousands of fans. The Chicago Review of Books recently spoke with Doyle about writing Constantine, exploring his sexuality, and whether or not she’ll bring John to Chicago soon. 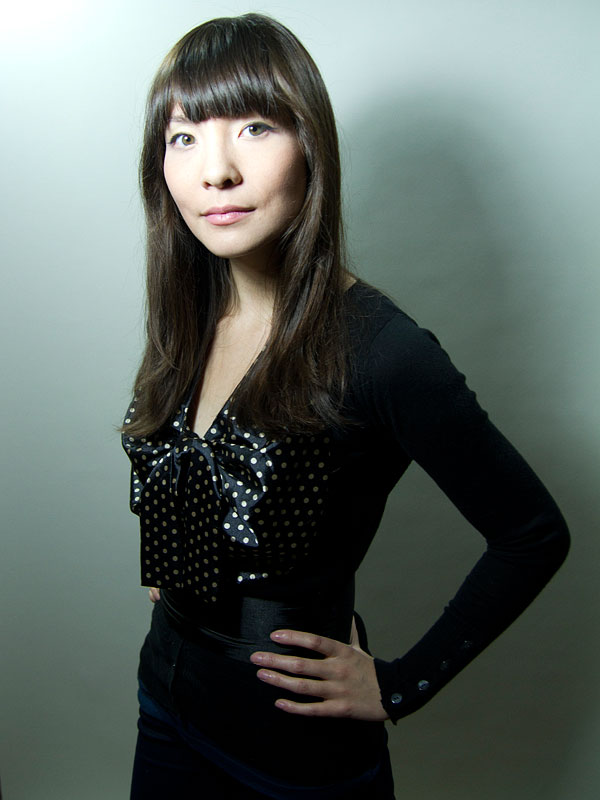 What did you and James Tynion IV want to bring to the character of John Constantine when you took the reins last year?

One of the things this new run of Constantine required was a “de-aging” of the character, or more accurately resetting him to the age he was when he first debuted. James and I talked a lot about what that meant, how we could look at John with new eyes and still have him read as essentially himself.

I think what we landed on was his vulnerability. John Constantine has always been a vulnerable character in a lot of ways, despite being very formidable and dangerous to know. He’s got a lot of tricks and tools of the trades, but he’s only a squishy little mortal at the end of the day who has to rely on his wiles to get him out of some biblically awful scrapes. So of course there’s that very immediate sense of vulnerability we wanted to explore.

But more than that, this is a John who’s young again for the first time, and a huge part of being young, for me at least, is feeling a bit lost in the world and isolated sometimes, not knowing how you fit in to the grander scheme but feeling like you’re somehow messing it up all the same. Our take on John is that he’s very vulnerable to loneliness, to being lovelorn, to the human foibles in his supernatural day to day.

Why was it important for you to explore John’s sexuality again, in a more direct way than recent titles?

There still aren’t a lot of same-sex romances present in mainstream entertainment, and to gloss over that with one of the few historically bisexual characters in modern comics would’ve been ridiculous. The representation simply matters. And it’s a big part of Constantine’s life and personality, besides. We had no interest in denying him that. It’s one thing to say that a character has hooked up with guys, or dated men, but we wanted to realize that part of him, not just allude to it. Some readers have commented that they felt we were bringing his sexuality too much to the fore, but John has always been really good bad-idea sex poured into tight pants, so I don’t agree with that.

I know you love Anne Rice, and I love all the literary references and libraries in your first two Constantine arcs. What other books have inspired or influenced you creatively?

Absolutely Anne Rice, what a modern gothic master! I chased down every new installment of The Vampire Chronicles as a kid, and I was hooked on the romance, soap opera of it all. In terms of the supernatural and magical, I dig Lev Grossman’s The Magicians, Susanna Clarke’s Jonathan Strange & Mr Norrell, Neil Gaiman’s Sandman, J.K. Rowling, and a lot of the older Hellblazer runs, the regular offenders.

I can’t point to one piece of media and say that it was specifically an influence, but I am personally drawn to anything that sets up an unseen world layered beneath or between the reality of our own. I love the concept of fantastical invisible infrastructures. Sidestepping into a shadow at night and being lost to primordial Lovecraftian forces is terrifying, but it’s almost more scary to be lost in a shadow society’s bureaucracy where you don’t know any of the rules or stakes, because that feeling at least is knowable.

How do you and James Tynion IV collaborate, logistically speaking?

We’ll kick ideas back and forth over phone and email for a while, and then usually James writes a brief page by page outline or breakdown of the issue based on those discussions because he is a glorious multitasker. Then we each write half. He’ll have the beginning, I’ll have the end, or vice versa. More rarely we’ve written entire alternating issues on our own, but we usually split scripts. I think the end result is pretty seamless. I’ve really enjoyed the ways our sensibilities have met on this book.

Did you know Brian Azarello swears he once saw Constantine at a bar in Chicago? Would you ever consider bringing him back to town? What do you think John would get up to in Chicago (other than this)?

I had heard that! Maybe he’s still lurking around, I don’t have 24/7 tabs on him. I’d love to see John crisscross the country, but he does seem to usually end up fighting the local unnatural forces in a bar. I don’t know, C2E2 will be my first visit to Chicago for longer than a day, maybe I’ll see him around and report back.

How did you respond to the 2005 movie and the recently canceled TV series?

Before I signed on this series, the 2005 movie was actually all I’d seen of Constantine, and straight up, I loved it. Of course I saw it at a free screening during college and I love Keanu, so I’m sure that swayed me. And you know, making John an American, changing his backstory, yeah, that did alter his character, but I could still get behind the characterization for what it was. Oh, and the casting? Tilda Swinton as Gabriel, Djimon Hounsou as Papa Midnite, Gavin Rossdale as Balthazar, what? Amazing.

Anyway, I did eventually get a huge PDF from DC and ended up reading almost a thousand pages of classic Hellblazer before we started on our take, but I still think the 2005 film was alright, no apologies. I haven’t actually watched any of the recent TV series, mainly because it was airing just as we were writing #1 and I didn’t want to get my wires crossed. I know a lot of the show’s fans say they can hear the actor speaking our lines, and maybe that means that John will stay true to himself, no matter the incarnation.

Ha, I think I have to say Chicago, at this point! I don’t know, that’s why he’s so great, John will put his unlucky stamp on any place you take him. He’s definitely gonna stay with me forever.

Can you tell me more about your deep-sea-as-outer-space, Cthulu/Namor mashup? And what do we have to do to make this happen?!

Ah, let’s take the underwater society of Atlantis and just shove it into the Marianas Trench. As magical and bizarre as Atlantis may seem to us, I think it’s probably just more of that secret infrastructure I adore, very regimented and commonplace to its inhabitants. Most citizens probably never make it farther than the Atlantean suburbs. The depths of the ocean are so unknown they don’t even qualify as frontier. Yes, it’s their outer space, but it’s only miles away and they are not prepared… it’s not happening, but oh man, that is fun and free to think about.

Note for our Chicago readers: Ming Doyle will be signing art and comics at C2E2 this weekend, March 18-20 at McCormick Place, in Artists Alley booth P13.