Writing Comics on Both Coasts: Marguerite Bennett at C2E2 2016 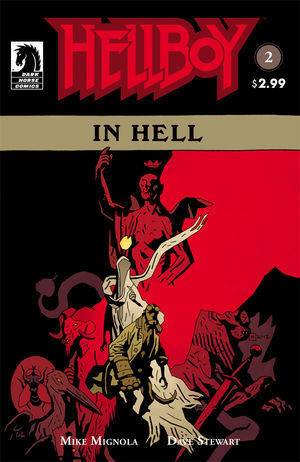 In the 25 years since he “stormed out” of the Marvel Comics office in New York, Mike Mignola has created his own shared universe of occult-themed, Gothic-toned characters at Dark Horse Comics. Perhaps the most beloved of those characters, Hellboy, became a household name in the 2000s thanks to Guillermo Del Toro’s kickass movies starring Ron Perlman in the sawed-off horns.

Mignola actually killed the character off in the comics back in 2011, but this is Hellboy we’re talking about, so his posthumous adventures have continued in Hellboy in Hell, a fascinating, dreamlike, 10-issue series written and drawn by Mignola himself. However, only two issues remain (#9 this May, #10 later this year) before Mignola says goodbye to the character—at least for the next year, as he takes a break from comics to paint.

This weekend, Mignola will be in Chicago, speaking on a panel and signing autographs at the three-day pop culture convention, C2E2 (Chicago Comic & Entertainment Expo), along with hundreds of other writers, artists, and actors, as well as tens of thousands of fans. The Chicago Review of Books recently spoke with Mignola about the end of Hellboy in Hell, literary influences, taking a yearlong break from comics, and his panel at C2E2 this Saturday.

Like many of your previous arcs, HELLBOY IN HELL contains a ton of literary allusions, from Dante to Dickens. What are some of the literary works or writers that have inspired you the most, both in your career in general and with HELLBOY IN HELL in particular?

I never thought “Oh, I’d like to write like that person,” but on a gut level, with Hellboy it was some of the pulp guys like Robert E. Howard and Manly Wade Wellman who wrote stories about characters who just wandered around. I always liked the idea of a character who was just roaming around the world and getting into trouble.

I discovered Michael Moorcock in high school, and while I wasn’t really consciously thinking about Moorcock when I started Hellboy, I realized this kind of “doomed hero” thing that Moorcock did ended up having such a big influence on Hellboy.

In general, I don’t read a lot of contemporary guys. Tons of the old nineteenth-century ghost story guys like M.R. James and Sheridan Le Fanu. That stuff is always rattling around in the back of my head. I did read a book a few years ago by Helene Wecker, The Golem and the Jinni. I loved it so much because it does what I love, taking these fantasy elements and rooting them in the real world. 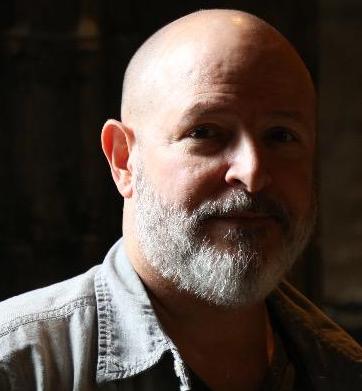 As a writer and an artist, you convey so much with a minimalist approach, showing far more than you tell. Do you find fewer words and images to be more powerful than a crowded page?

I still don’t really think of myself as a writer, so the last thing I want to do is go on and on and really demonstrate how much of a writer I’m not. The less I can do the better. Way back when I first started writing Hellboy, I said I’m going to let the pictures do the work as much as humanly possible, because that’s my strength.

With Hellboy in Hell, I don’t feel the need to over-explain anything. Having this dreamlike thing going works well with underwriting and leaving a lot of grey areas. Logic goes out the window. It’s more about the tone and the mood than it is about imparting specific information.

Like all publishing, comics have been moving more and more into the digital realm. Do you think something is lost when a reader experiences Hellboy in Hell, say, on their mobile phone, panel-by-panel, instead of on the printed page?

I never look at my stuff or anybody’s stuff that way. My gut reaction is the screen is too small. Certainly any of this stuff where you go panel by panel, really entirely blows what I do, because I design pages, and sometimes the narrative goes in a couple different directions. It’s not a grid of six panels that are all completely self-contained. Everything on that page is meant to interact together. Which is one of the things that’s really unique about comics as an art form. It’s not like film, because with comics you constantly have six or seven images in front of you at the same time. Anything that breaks that, anything that gets away from the actual page, lessens what I do.

Yeah, I tried to read one issue of Hellboy in Hell on my phone on the CTA and I hated it.

I just don’t think it would make any sense. Not just the flow of the story but also the design. Certain panels interact with other panels. Taken by themselves, I’m sure a lot of them are very wonky. 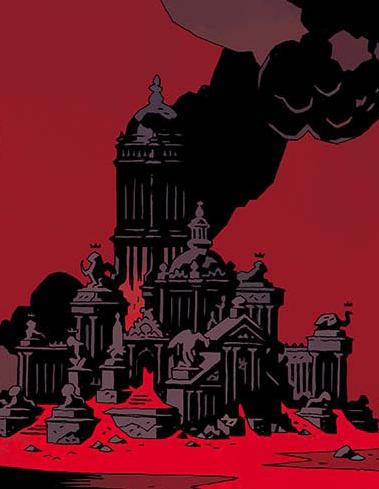 What can you tell me about the painting you’ll be doing during your one-year break from writing and drawing comics?

The ideas for the paintings come from a lot of the work I’ve already done in Hellboy and in The Amazing Screw-On Head.  I’ve done a couple of big cityscapes in Hellboy in Hell, and I’d like to paint those and the people who live in all these buildings. There’s so many of these city shots where I go, “I want to go in that window and I want to see those people.” The biggest challenge is going to be not making the paintings into a story, because I’ve been telling stories for at least 20 some odd years.

Will we be able to see and/or purchase your paintings?

They’ll definitely be on my website or Facebook or wherever else you put these things. We’ll probably do prints of the good ones. What’s really exciting though about this whole year-off thing is that I have absolutely no plans for what I’m doing after that. It’s been 25 years since I “finished” something. I had a falling out with Marvel comics 25 years ago and I stormed out of their offices and a bunch of work I had lined up just went away. That’s at least 25 years ago and that’s the last time I didn’t know what I was doing next. Right now, other than this big year of painting, I have absolutely no idea what I’m doing next and it’s really exciting.

Can you tell us anything about the final issues of Hellboy in Hell (#9-10) or the future of the Mignolaverse?

I can’t say much about Issue 10 except that it’s my wrap-up for Hellboy. When I finished issue #8, I realized, “Oh, this thing isn’t going to go on as long as I thought it was because it feels like we’re pretty much where I was going.” Stories, if you keep these things organic, they work at their own pace. I had to scrap everything I’d done, re-plot issues 9 and 10.

When I threw Hellboy into Hell, I thought he was going to meander around forever. Once he killed Satan, which somehow I didn’t think was going to be that big a deal, it kind of changed the shape of the book. The minute I finished, the minute I drew the last page, which was a nightmare for me, I started freaking out: “Holy shit is that really the last page of my Hellboy in Hell stuff?” So I started plotting sequels to it. I don’t know that I would go back and draw more of the adventures of Hellboy in Hell but I know there are a ton of things left for him to do there. It would be a radically different kinds of stories than what I’ve been doing.

What are your plans for the panel this Saturday at C2E2 here in Chicago, “The Future of Hellboy and the Mignolaverse”?

Ordinarily I do a panel by myself and just talk about whatever anybody wants to talk about. For this one, since Chris Roberson was going to be in town, I said you definitely need to put Chris and I on this panel together because I will just talk about the end of Hellboy. I need Chris there because Chris is doing the Hellboy and the BPRD series with me.

Most of the writing on that he’s doing is the history of Hellboy. I might give him suggestions on where things should go, but he’s taking it in a really interesting direction and doing type stories I never got around to doing. He’s actually much smarter than I am and he knows much more about America and the world and stuff, what was going on in the actual world. The beauty of introducing Hellboy in 1944 and then picking up his adventures in the 90s is there’s a gigantic gap. So to be able to go back, start at the beginning of Hellboy’s career and flesh it out with new characters? That’s been great. I’m looking forward to doing more of that with Chris.