The first story in any collection sets the tone and expectations, so Cara Blue Adams’ decision to begin her linked collection, You Never Get It Back, with a rather metaphorical story is striking. But Adams isn’t afraid to make bold choices in her fiction, and it’s little wonder this debut collection won this year’s John Simmons Short Fiction Award, judged by Brandon Taylor. While the stories are linked by Kate, our recurring protagonist, the first story is arguably about another character entirely. What’s so special about this book is that regardless of protagonist, these thirteen stories, which range from 26 pages to 43 words, are all strong.

The collection opens with, “I Met Loss the Other Day,” told by an unnamed tailor about their customer named Loss, whose job is cataloging people’s losses. The narrator declines the customer’s offer to pay, and requests their card instead:

It’s a powerful, beautiful opening, and establishes the collection’s most critical themes: loss and longing. This story comes before the book’s first of three parts, separate and distinct, framing the subsequent stories.

Next is the story that gives the collection its title, where we meet Kate, the book’s central character, on New Year’s Eve 1999 when she’s in her twenties. She’s recently fought with her boyfriend, and, unable to reach him, agrees to attend a party with her old college roommate. As Kate is without a cell phone, the only way her boyfriend can reach her is by calling her old roommate, who wants the guy to sweat. Adams skillfully weaves this friend’s disapproval, Kate’s palpable longing for his call, and memories into a cutting portrayal of the intricacies and complexities of the relationship. The reader sees it from multiple sides, and will develop an opinion about whether or not Kate should move on, which can make the story’s ending even more poignant.

We then follow Kate to Vermont a year or more later in “Charity,” as she’s visiting her mother and younger sister for the holidays, and witness their family dynamics. It’s another piercing story that delivers rich emotional resonance. Two others—“The Sea Latch” and “Clear” —also grapple with familial dynamics, so it’s clear how Kate’s character has been informed by her childhood and relationship with her mother and younger sister, and, to a lesser degree (but is it, really?) her largely absent father.

Typically, a few years pass between stories, so we observe Kate through a variety of points in her life, in different romantic relationships, professions, and places. Perhaps the greatest strength of the collection is the way Adams leverages these changes, as well as time, in such a way that it’s apparent how these factors influence character. Kate is involved with several different men throughout the collection; she’s a part-time lab worker, a graduate student, a researcher, and a writer; and lives in Vermont, Tucson, Albuquerque. Yet despite varying points of view and settings, it’s less the lens we see Kate through that changes, but how she sees herself. But isn’t that true for all of us, and the way our choices shape our lives? Sometimes it feels our regrets and yearnings define us; and Adams captures these feelings perfectly, such as in “Shoulder Season” when Kate and her friend are sitting together in the sun:

“What I wanted most was for us to go on this way: all potential, no action. I liked this state. Longing was, I felt, preferable to disappointment.

‘What if your soulmate and your best friend and the love of your life turn out to be three different people?’ she asked me.

‘It’s a stupid question,’ she said, ‘but this guy asked me, and now I can’t stop thinking about it.’

The friends joke, and then Kate reflects:

“Nothing was turning out as we had imagined, and maybe it was the strength of the desert sun, but we felt like we were squinting toward a future that glowed white without possessing any discernible shape.”

The jokes, by the way, are funny. Adams has a knack for inserting wry humor at just the right time, which helps balance some of the heavier topics that emerge. Along with exploring the distance between what Kate once had and what she currently wants, these stories wrestle with issues of consent, gender, social class, and loving someone struggling with addiction. There’s an impressive range displayed here—both in subject and style—making You Never Get It Back a strong and notable collection. The expectations Adams set with her first story—which is smart, moving, even brilliant—are indeed fulfilled, which will leave readers hungry for her next book. 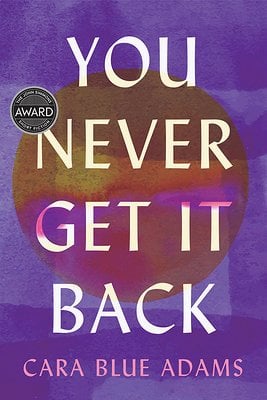 FICTION
You Never Get It Back
By Cara Blue Adams
University of Iowa Press
December 15, 2021