Choose Your Own Myth in “Where You Come From”

Lisa Harding’s second novel, Bright Burning Things, follows single mother Sonya Moriarity, as she slides in the abyss of alcohol abuse, enters a recovery program, and attempts to rebuild her life. The emotional center of the novel is Sonya’s love for her son, Tommy, and her internal struggle to be the mother he needs.

The early chapters play out as short vignettes, snapshots strung together in staccato bursts of narrative. The effect replicates Sonya’s drunkenness and the passing moments of sobriety between drinks where clarity and intoxication compete. Sonya’s narration fumbles through certain details of her life, things she missed by the distraction of drinking. She is unreliable as a mother, and presumably, as a narrator. The scene construction captures the sense of intoxication and illustrates how Sonya attempts to maintain herself and her son. She loves him, but the alcohol comes between them. Her shortcomings as a mother, like failing to adequately feed Tommy or leaving him on a beach while she swims in her underwear underscores the repercussions of her drinking. She burns his fish sticks or buys wine instead of his pizza. The brevity of the scenes helps move along this exposition, and also clarifies the extent of her crisis,  when she identifies these failures but still can’t change her actions.

Addiction and recovery narratives have proliferated, blurring the lines of memoir and novel, and creating a genre all its own. Harding’s Bright Burning Things follows the expected tropes, and to some degree, there is a familiar predictability to the beats of the story: Sonya abuses alcohol; Sonya enters a rehabilitation program; Sonya recovers. What Harding introduces to differentiate the novel is this focus on Sonya’s desperation to be a good mother. Is it enough to carry the novel?

Sonya is an unlikeable protagonist. If Sonya has any good intentions, she trades them for bottles of wine. She struggles to maintain healthy relationships with the people around her, pushing them away if they try to help. She is deeply insecure, worried other people will steal her son’s love. She is, in short, an addict. On one hand, it seems awful to hold such contempt for a character hooked on booze. On the other hand, Sonya makes bad choices, even when she is sober.

None of this is to say we as readers aren’t interested in seeing her through it all. She is a compelling character. Her mother is dead, her father estranged. Nevertheless, to Harding’s credit, Sonya is somehow sympathetic, despite her faults. We are allowed to see how she slipped so easily into alcohol abuse. From the moment she became a mother, she has felt isolated: “Didn’t they know I didn’t have a clue that day they let me go off on my own from the hospital? The only support I was offered was a harried public-health nurse who said on occasion, ‘Are you sure you’re coping on your own?'”

The only person worse than Sonya is perhaps her father. He returns to her life after a concerned neighbor reaches out to him, and he’s around long enough to push her into the recovery program. Yet, he won’t care for Tommy, leaving him a ward of the state, and rehomes Sonya’s dog with cruel strangers. But since he is less likeable than she is, and this benefits the text because it provides us with a why to explain Sonya’s incompetence.

The driving force of the novel is Sonya’s love for Tommy. Tommy, who is almost five, has little agency, but he is old  enough  to realize his mother is imperfect. Her shortcomings weigh on him, and it is not altogether clear whether he wants to be reunited with her, which further complicates Sonya’s journey. For Sonya, Tommy is her main motivation to work toward sobriety. The threat of the authorities taking him from her is the only thing that convinces her to enter the rehab facility. Her love for him is the only thing powerful enough to separate her from alcohol.

The mechanics of Sonya’s rehabilitation largely happen offstage. The institution is Catholic, which Sonya is not. They make her pray, which she dislikes. They serve too much meat, which Sonya doesn’t eat. Her time in the rehabilitation center is a relatively small part of the narrative, this choice benefits the text by keeping the narrative focused on the absence of Tommy and Sonya’s longing to return to him.

Since from the start the narrative arc is laid out clearly, Harding leans on our emotional investment in motherly love. There are questions we want answered: is her love strong enough to support her through the process of recovery; is it strong enough to keep her sober? The emotional center of this book is a mother’s love for her son, and whether that is enough to be triumphant over addiction. This is not a process novel revealing the daily grind of recovery, but instead an emotional experience driven by motherly love. Bright Burning Things contains few surprises, but the prose is clean and crisp, the narrative moves steadily along, and ultimately appeals to our desire to see the story through. 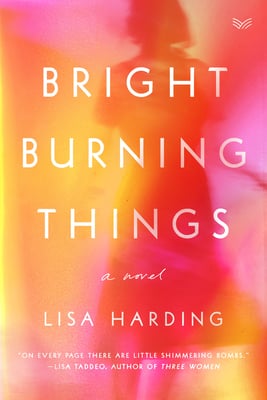