In his historical novel The Magician, Colm Tóibín presents an intimate portrait of Thomas Mann, the great German novelist and foe of the Nazi regime. Good biographies of Mann exist, but Tóibín uses a novelist’s tools to present a picture of Mann as a full human figure with darkness and depth.

The Magician will draw in readers unfamiliar with Mann, as well as readers who know Mann’s Death in Venice, The Magic Mountain, and Doctor Faustus. Anyone can follow this story of a genius who wrote his way through the decline of the nineteenth-century bourgeois order and the emergence of a world of new possibilities and terrors. Reflecting on this global transformation, Tóibín writes, “Thomas saw the German defeat [in World War One] as the end of something. Since he himself had entertained views about the specialness of the German soul, he felt it his duty now to ban such phrases from his lexicon and from his mind. The more he had spent time on [The Magic Mountain], the more he was certain that he needed to become ironic and speculative about his own heritage.” The story Tóibín tells, then, is not the story of a stationary man in a changing world, but a story of a man changing with and against his times.

In Tóibín’s telling, Mann’s social and political under-formation—his reluctance to follow his radical brother Heinrich in sticking to rigidly-defined positions—enabled his artistic development. As an artist, Mann imagined his way into many different lives. Planning his semi-autobiographical novel Buddenbrooks, Mann “would enter his father’s spirit, and the spirits of his mother, his grandmother, his aunt.” Mann’s ability to loosen himself from social categories and inhabit the lives of others made him a kind of zauberer—a magician.

Tóibín sharpens his picture of Mann by placing him in relation to other major thinkers and artists. Hovering around the edges of the story is Bertolt Brecht, a writer who, like Mann, opposed the Nazis, but who adopted absolutist stances on art and politics that Mann found alarming. W.H. Auden shambles into the story, winning Mann’s thanks for marrying his daughter and thereby granting her British citizenship, but grating against Mann’s reserved sensibility: “Thomas studied the poet now, noting how much he resembled one of those lean dogs one saw in the Bavarian countryside, russet-colored, watchful, always on the verge of pleading for some food or mildly barking as a way of drawing attention to himself.” Absent from the book is Theodor Adorno, the great German thinker who helped Mann work out the theories of music presented in Doctor Faustus. Although Tóibín cannot be expected to depict all of Mann’s relationships, it would have been fascinating to read scenes of Mann and Adorno hashing out their agreements and disagreements over music, German culture, and politics.

Because Tóibín wants to address readers unfamiliar with Mann, he does not present long reflections on Mann’s novels. Instead, he highlights the events, ideas, and relationships Mann would draw into and transform through his work. For example, Tóibín imagines the genesis of Death in Venice by describing Mann’s trip to Venice and his reflections during that trip on the declining health of his friend, the composer Gustav Mahler: “[H]e had imagined a story in which Mahler would figure, but the protagonist would be a lonely man rather than a husband and father. Thomas had toyed with the possibility of reducing all the grand ideas his protagonist had lived with and written about to one idea, or one experience, or one disappointment. It was as if he could take what Heinrich had just been expounding on in the street and test it against some pressing, dark emotion.” Here, within his narrative of Mann’s life, Tóibín presents Death in Venice not simply as a story about Mann or Mahler or artists in general, but as a complex meditation on interacting dynamics of art, desire, and decay.

A highlight of the book is Tóibín’s depiction of Mann’s wife, Katia. The daughter of a highly-cultured secular Jewish family, Katia was instrumental in the development of Mann’s art. Furthermore, as Tóibín shows, Katia’s sexuality did not fit neatly into the categories of her time and she supported her husband and children in their diverse sexualities. Writing about Katia, Tóibín puts aside tropes of the poor wife oblivious to her husband’s homoerotic desires. Instead, Tóibín presents complex scenes such as an episode where Katia arranged for Mann, who was nearing death, to have a long lunch served by a waiter Mann desired. Here and throughout her life, Katia refused to uphold conventions for conventions’ sake and attended, instead, to her loved ones’ particular needs.

Part of the pleasure of reading The Magician is seeing how one great writer, Colm Tóibín, imagines the life and work of another great writer, Thomas Mann, in prose as beautiful and vibrant as the older writer deserves. Tóibín foregrounds details of Mann’s writing life—his set schedule for writing and his specific methods of work—that Tóibín, a prolific and accomplished writer, likely recognizes as integral to a great artist’s creativity. In The Magician, Colm Tóibín presents a rare view into the making of serious art and, in the process, shows he is a powerful magician himself. 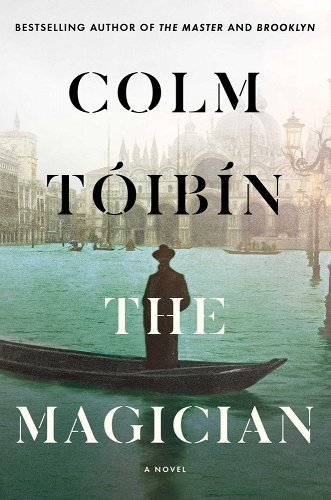 Ross Collin is an associate professor of English education at Virginia Commonwealth University in Richmond, Virginia. He writes about the political and ethical dimensions of literacy education. His writing has appeared in The Journal of Literacy Research, English Journal, Changing English, and Teachers College Record.