In 2004, Brooklyn-based indie press, Akashic Books, launched a series of noir short-story collections. The series, which now boasts more than 90 titles, began with Brooklyn Noir but now features collections set in major cities all around the world, including Chicago Noir and Chicago Noir 2: The Classics. Taken together, these titles feature some of the globe’s best-known and most talented up-and-coming writers, while stretching the contours of the noir genre — in these books, noir doesn’t always mean men in fedoras and leggy femme fatales.

The latest in the series, Prague Noir, hit shelves on February 6, 2018. I spoke with Akashic’s publisher and editor-in-chief, Johnny Temple, about what inspired the series, how writers from various countries interpret noir differently, and why that difference has made for such a rich and fascinating collection of books.

What inspired such a global-minded series?

We didn’t intend it to be a series at first. We published Brooklyn Noir in 2004 because we wanted to pay homage to Brooklyn, which is one of the most ethnically diverse cities in the world. Biking around, you can hear Chinese being spoken on one block and then Yiddish on the next. It’s one of the things that people who live here love about the place.

After bouncing around various ideas about how to capture that diversity, we came to the idea of doing an anthology by a bunch of different writers, with each story set in a different Brooklyn neighborhood. But we didn’t have lofty, commercial ambitions.

There’s a conventional wisdom in publishing—not just in the U.S. but around the world—that anthologies don’t sell. But to our surprise, the book went on to do really well. We sold through our first and second printings, the New York Times did a big feature story on the book, and then it went on to win prominent mystery writing awards. That success made it very easy to say, well, we did this kind of book for New York, why not do the same for other places? We’ve since published over 90 books in the series and have many others on the way.

Why is noir, of all genres, resonating so strongly with people around the world?

Well, for one, noir and crime fiction engage in social critique and social observation really well. There’s something about reading social critiques in literary fiction that can feel heavy-handed or didactic; noir and crime fiction just hold that critique better. Also, as a genre, noir is dangerous and sexy, and for many people, that’s an interesting lens to look at their city through. That’s probably why each book is most successful in their respective cities. Also, each story in each book is set in a different neighborhood of a city, so it’s not like only the hipster or more well-known parts of a city have visibility. That organizing principle pushes writers to explore a city as a whole, and people have responded well to that.

Is noir, as most Americans define it, understood in the same way around the world? Or are there cultural and stylistic differences?

There are definitely differences, and in fact, for this series we define noir really broadly. There are certainly noir purists who have a strict definition of what noir literature is and should be, but I wouldn’t want to try to build a series around a strict definition because we like the diversity of style and setting that our loose definition allows. We’re really not looking for more stories with white men in fedoras and femme fatale women.

In some cities around the world we’re met with questions like “what is this noir literature you’re talking about? What does noir mean?” In these cases, the editor of the book has a responsibility to not only pull the stories together but to engage in a bit of coaxing and explanation.

There are also times when American writers have been approached to write for our series, and they decline because they see themselves as literary writers, not genre writers. The editor then has to explain to them why they would fit perfectly in the series. We love having this range of authorship, because we don’t want to publish only crime fiction writers. We want non-fiction writers to try noir, and we certainly want literary fiction writers to try it.

Which writers do you want to publish next?

For us it’s more about the cities than the individual authors. The authors are what make the series great, but we choose the cities first. We haven’t done Tokyo Noir yet, for example, or noir from Shanghai or Bangkok or Athens. It’s also important for us to find the right editors. When we wanted to do Boston Noir, we knew that Dennis Lehane (Mystic River, Gone Baby Gone, Shutter Island) was the editor we wanted. It took about three years to convince him to do it, but then he finally said yes and did just a phenomenal job with the book. We also knew we needed Laura Lippman (author of the Tess Monaghan series) to edit Baltimore Noir, and George Pelecanos (The Martini Shot, The Double) to edit D.C. Noir. The editor is perhaps the most important decision we make.

What’s next for the series?

One of the most exciting things we’re doing with this series is publishing more books set in the Middle East, Asia, and Africa. A book we’ve been working on for a long time—and which we plan to release next year—is Baghdad Noir. We’re also doing Marrakesh Noir. Noir from Nairobi is underway right now, and soon we’ll be publishing noir from Accra, the capital of Ghana. The reason I’m excited is because, when these books are successful, and I think the majority of them are, the reader comes away with not only a sense of the landscape of the city, but a sense of the city’s literary styles and conventions.

Do you have a favorite noir writer?

Walter Mosley is incredible, and for people who are new to the genre, I recommend Raymond Chandler. The Big Sleep might be the best noir book ever written. It reads just as fresh today as it did when it was first published. 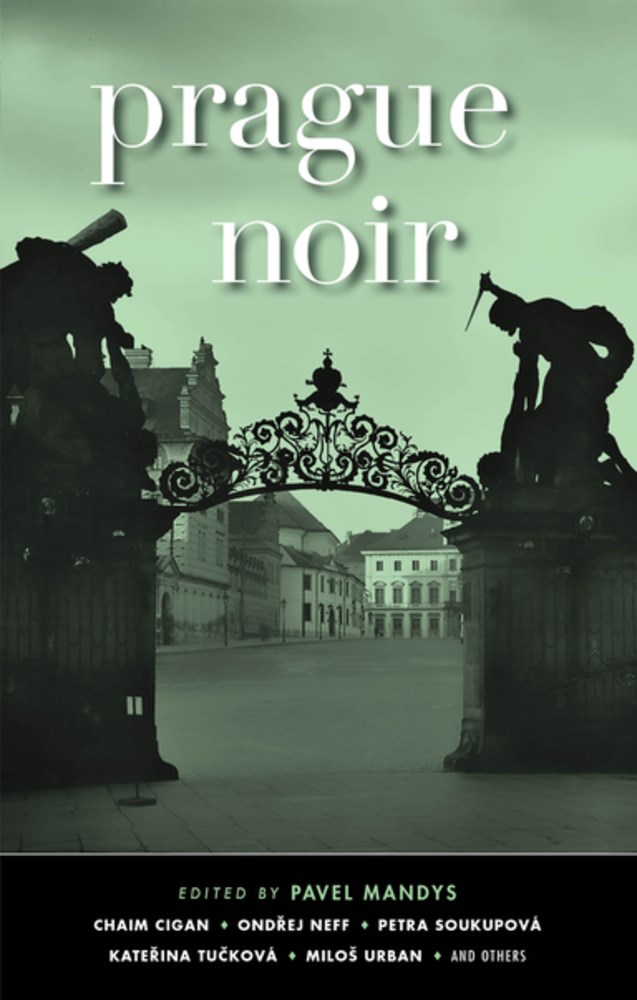 Johnny Temple is the publisher and editor-in-chief of Akashic Books in Brooklyn. He won the 2013 Ellery Queen Award; the American Association of Publishers’ 2005 Miriam Bass Award for Creativity in Independent Publishing; and the 2010 Jay and Deen Kogan Award for Excellence in Noir Literature. His writing has appeared in the Nation, Publishers Weekly, AlterNet, Poets & Writers, and BookForum, and he is the editor of U.S.A. Noir, an anthology of the best stories published in Akashic’s domestic noir series.

Pavel Mandys is the author of Prague: City of Literature and the editor of Prague Noir, out now on Akashic Books press. He’s also a Czech journalist, book critic, and organizer of the annual Czech book award Magnesia Litera.

Diving into the Specific in “Bedrock Faith”