Start the Year with ‘Tuesday Funk’

Thanks to an early obsession with Victorian literature, I’ve watched (and listened to) dozens of Charles Dickens adaptations. I’ve seen the BBC versions of Great Expectations, Bleak House, and Little Dorrit (all quite good). I’ve listened to Martin Jarvis — the best voice in the world, for my money — perform A Tale of Two Cities and David Copperfield. I even watched Roman Polanski’s Oliver Twist before I knew any better.

And thanks to another obsession (with seasonal holidays), I’ve seen far too many adaptations of A Christmas Carol: the Muppet version, the Captain Picard version, the Jim Carrey dead-eyes motion-capture version (barf), the Bill Murray version, and a handful of stage plays.

I list these qualifications to help you believe me when I say — with zero hyperbole — that the Goodman Theatre‘s annual production of A Christmas Carol is hands-down the best Dickens adaptation I’ve ever seen.

They’ve been doing it for 40 years. The script is unbelievably faithful to the original novella, but the directors and performers really enhance the story in three key areas: atmosphere, horror, and comedy.

To bring 19th-century London to life, the sets and costumes are Hollywood-level gorgeous. (There are three-story buildings on stage for most of the evening, cut in half like the interiors of a Wes Anderson film, along with plenty of live music and dancing.) The stage effects employed to create ghosts and otherworldly visions are so effective, the crowd jumps like the audience at a showing of The Conjuring 2 at least three times in the first act. And oh! The physical comedy! Particularly from Scrooge (Larry Yando) and Bob Crachit (Ron E. Rains).

I spoke with the show’s director, Henry Wishcamper, about the Goodman’s approach to Dickens, including casting without regard to the race or gender of the original characters. 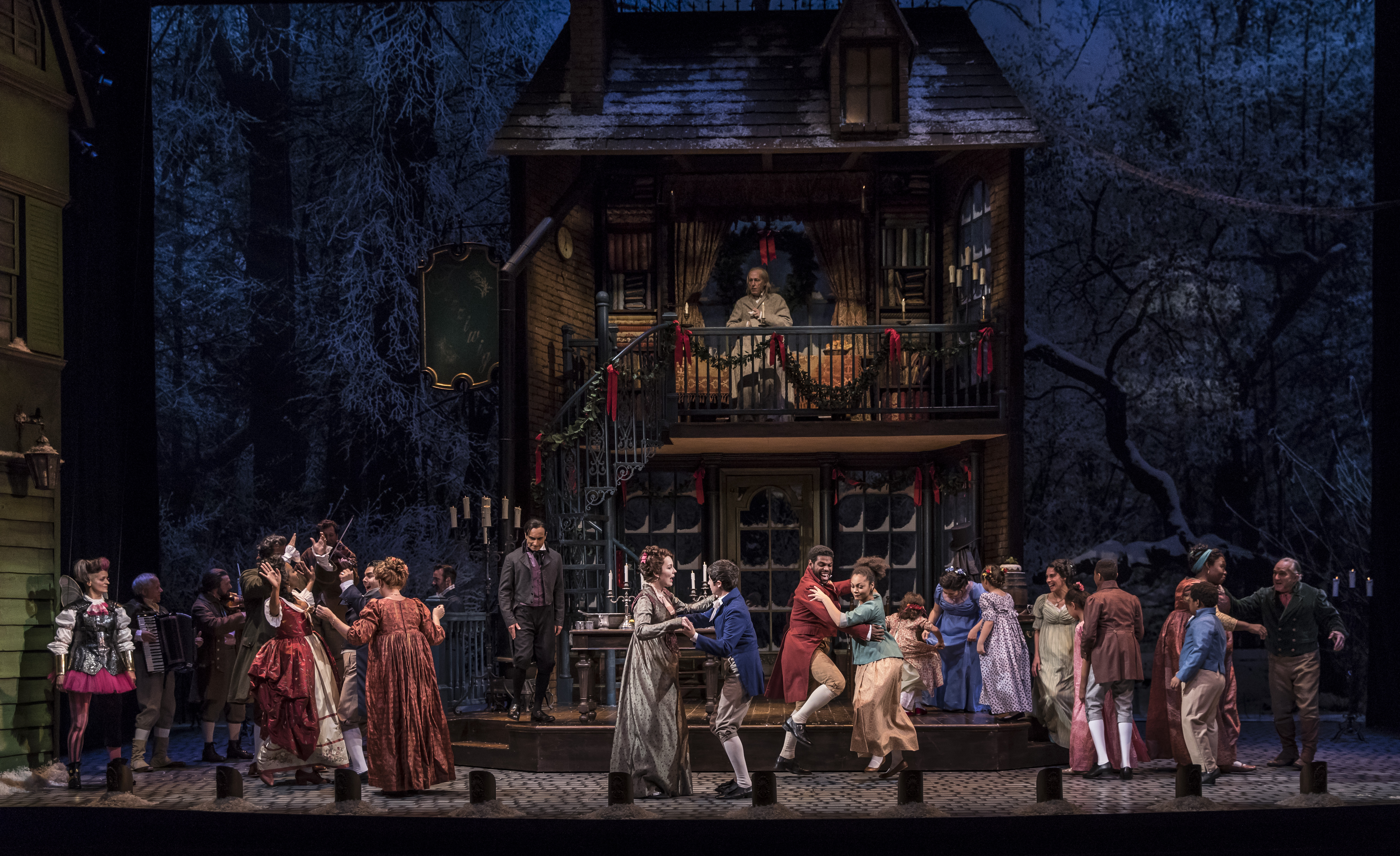 How much does the play change year over year? Do you attempt something new every season?

Yes, we try to make changes each year to keep the show fresh and create surprises for audiences who come repeatedly over the years. When I first took over the show we made several major changes to the physical production: a new bedroom for Scrooge, a new set for Fred/Frida’s house, new backdrops, a crazy mobile pawn shop for Old Joe, etc. In the last year, the changes have been more based in casting and the text. I love the balance between the faithfulness of the adaptation and the Goodman’s willingness to continually re-envision the physical production and casting choices. This balance leads to a show that captures the depth and universality of the original novella while also making the story feel fresh, alive and in dialogue with the current moment.

Why is the Goodman’s casting approach to ACC important to you and the theatre? Does that truly extend to every role? Could we see a female Scrooge in the future?

In 1984, the Goodman’s production of A Christmas Carol was one of the first major American theatrical productions to employ what was then called non-traditional or color-blind casting starting. It was quite controversial at the time. But the Goodman wanted to create a show where everyone who came to see it could see themselves onstage.

I do think this production has played a major role in shifting how our industry thinks about casting. Casting is very important to me artistically and politically. No other choice I make as a director has a bigger impact on how the story feels onstage or the relationship that is created between the production and the audience. In a show like A Christmas Carol that gets repeated annually, a change in casting can completely transform the show. We have several new people this year that I believe alter the tone and impact of the show significantly. I find that to be incredibly exciting.

I think a female Scrooge is a possibility at some point. We have several amazing women in Chicago that I would love to see play Scrooge.

What can a stage adaptation bring to the story that the original novella can’t?

I think the biggest difference is in how we experience it. Dickens is great to read aloud (I Remember an amazing road trip where my wife and I took turns reading Bleak House aloud as the other drove) but for the most part, reading the novella is a solitary experience. Seeing a stage adaptation is a communal experience. There is something about the experience of 800 people coming together in a theater to experience this story that is powerful and joyous. This production feels very different at matinees when many families attend, at evening shows that tend to have more adults and less kids and at student performances. The audience informs the performance. The show responds to the audience as much as the audience responds to the show.

You’ve directed ACC before. What draws you to this story again and again?

My relationship to the story changes each year. I guess it depends on what is happening in my life. Some years, I am most engaged with the political dimensions of the show. Other years, it’s more about the emotional dimensions of Scrooge’s relationship to himself and the people around him. And some years, my focus is very much on craft: on tightening the script, adjusting the staging and the physical production in order to fix certain wonky spots in the show.