The Poetry Shortlist for the 2017 Chicago Review of Books Awards 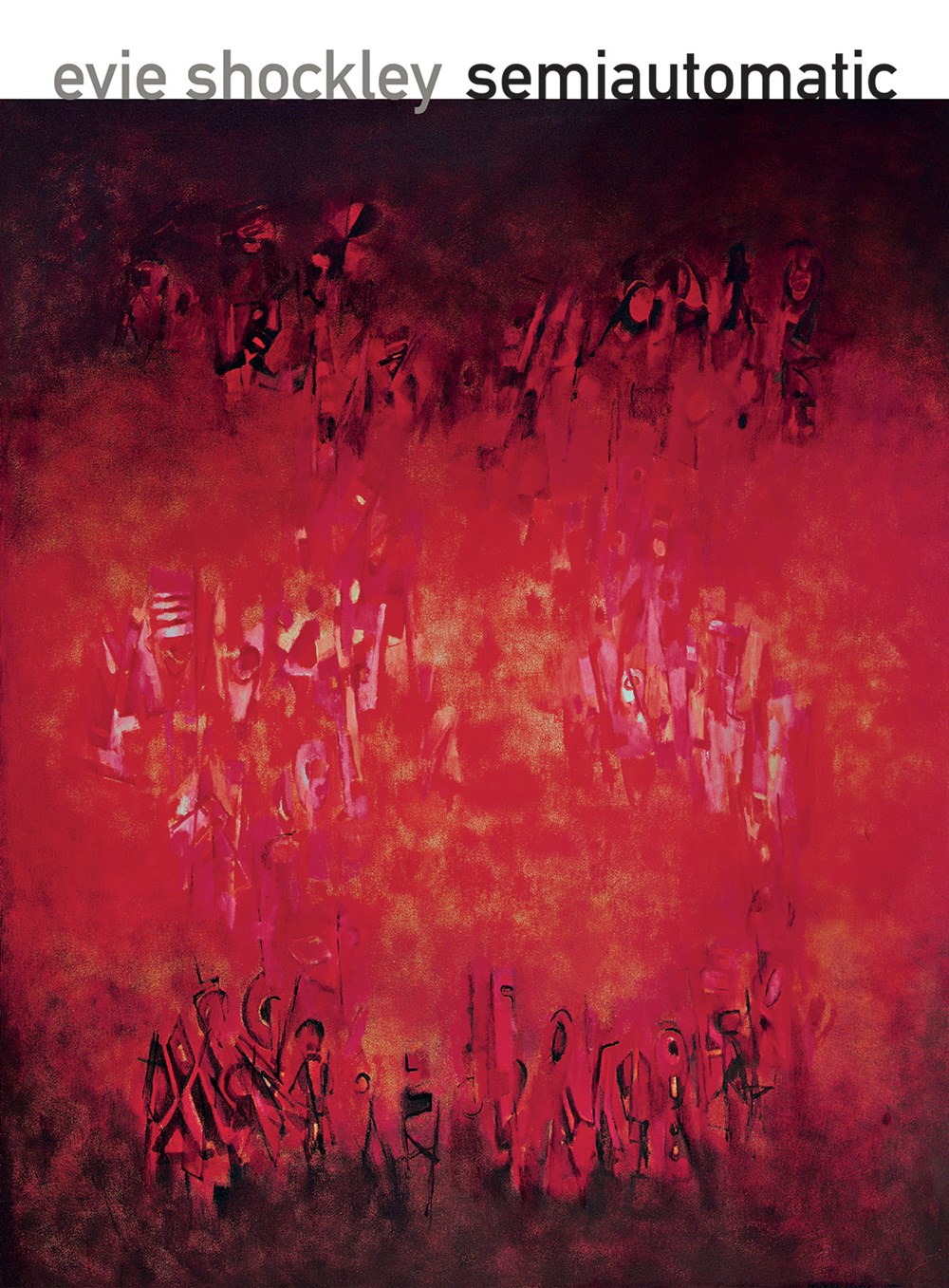 Evie Shockley is the author of a half-red sea and the new black, and in her newest collection, semiautomatic, are the horrors of America: the sex trafficking, the violence towards a 14-year-old girl in McKinney, TX, the murder of Renisha McBride, and more, and more. It is an onslaught. But so has been living through these years. semiautomatic offers the art we need to travel through the rage and grief together. Shockley has won the Hurston/Wright Legacy Award in Poetry, the Holmes National Poetry Prize, and fellowships from Cave Canem, MacDowell, and the Schomburg Center for Research in Black Culture of the New York Public Library. She currently teaches at Rutgers University, New Brunswick.

With any writer that’s as interested in sound as you are, I love to hear how sound speaks to you, how you find energy in sound, how you found sound to begin with?

For me, there was no finding sound, no “before sound.” As the daughter of a jazz musician, born in “Music City” and raised in a church with congregational singing, sound was my birthright. When I look through the papers and notebooks I filled as a kid, I realize that I was writing song lyrics more than poems. Even when I wasn’t thinking about sound in relation to music, per se, my relation to poetry was shaped by popular forms that lean heavily on rhyme and meter: Mother Goose, limericks, Lewis Carroll, Ogden Nash, the jump-rope and hand-game songs the girls in my neighborhood sang when we played.

My father comes back in here again; though he played jazz professionally some, his “day job” was as a kindergarten teacher, and the playfulness with language that he used in his classroom, he brought home to his daughters. He had a rhyme for everything, it seemed! Some of that tendency in him pre-dated his teaching, and came from culture he grew up in. The “dozens” and “toasts” that scholars now write about were a part of his day-to-day as a boy and young man.

He didn’t share the risqué stuff with us, but was full of sayings that kept the sound of language at the forefront of my awareness. (“He’s got more gall than Charles de Gaulle!” Or, an example that made it into one of my earlier poems: “He’s as high as Georgia pine!”) I was always aware of sound as an engine for language. At a certain point, though, when I began to focus seriously on my poetry, it clicked for me that this playfulness I enjoyed, but took for granted, could be harnessed to ideas in a way that could pack a lot into a line. Sound can make language easier to swallow—or it can be what makes you choke on an expression. My poetry is looking for both kinds of moments and trying to heighten them so you’ll take note of the language and its meaning more consciously.

In poetry, we talk about juxtaposition a lot, in terms of diction, references, image, etc. What I love about your work is how it uses emotional juxtapositions, as in the beginning of “playing with fire”: “something is always burning, passion, / pride, envy, desire, the internal organs / going chokingly up in smoke…” It’s a roller coaster, and I love it. Can you talk about you approach weighting a line?

I’m not sure I have a conscious approach to weighting a line, as you put it, in relation to emotional juxtapositions. This must mean, in part, that I’m working intuitively. But I think it also means that what I’m consciously doing with the line, which is related to ideas and language, has effects that play out in the realm of emotion, at least sometimes, for some people.

Another way of putting this would be to say that language—or English, specifically, in my case—carries around a lot of freight beyond simple denotation, and in the context of the kinds of subject matter that I gravitate towards, that freight is fraught. My work in a poem like “playing with fire” is to put readers in a position to be blindsided by all that linguistic/cultural baggage, the way I am blindsided by it in various contexts (poetic and otherwise).

We feel the operation of language, in these situations, as we might not feel it when the words are spooling out in ways that we can see coming, so to speak. Enjambment, assonance, consonance, and other tools for mixing syntactic play with sonic association are go-tos for me. One of the challenges then becomes not allowing those strategies to become overly familiar to myself—I have to leave room for my own discovery and surprise.

“a one-act play” stopped me in my tracks. So striking. And then there was another, and another, later in the book! I don’t even want to ask a specific question. Can you share anything you’d like to about these poems?

I’m glad to hear that these pieces spoke to you! Perhaps they were born out of a desire I have to write for theater, as a warm-up for that work . . . I remember hearing (or reading?) Suzan-Lori Parks (one of my favorite playwrights) say once that writing a play was fundamentally a matter of getting people on the stage. Once they’re there, they inevitably interact and start to tell you who they are. The first of these poems might be thought of as a response to her conceptualization of the process. Why do some things indeed seem to happen both arbitrarily and yet also like they have been predetermined? Why do some scenarios seem so predictable?

And then there’s that aspect of theater that holds such fascination for me, as a theatergoer: the way that plays are fictional, but are nonetheless happening right before your eyes – not like the movies, which are always safely in the past, already edited, contained. What would happen if we treated our lives as if they occupied this same limbo between reality and fiction?

The second section of the book, the topsy suite, is a suite of poems about a young girl named Topsy, who, the notes tell us, “is rescued from Uncle Tom’s Cabin.” In these poems, you’ve put led her into intersections with Sylvia Wynter, Alice from Alice in Wonderland, and Sandra Bland. What do you feel is the importance of displacement and intersection in art?

I could just say: my topsy is tricksy. And leave it at that.

But let me juxtapose that answer with this one: I think of these strategies as invitations, or doorways, into the poems and into conversation with my ideas. For example, by placing a character who originates in Uncle Tom’s Cabin within a world created by Lewis Carroll, and drawing upon language from both of these earlier texts, I can create a pathway from something a reader may already be familiar with to ideas or situations or meanings that they hadn’t considered. And sometimes, of course, the poems might lead readers to my source texts, which is also important, as we’re again (or still) confronting the importance of our history to our present.

When I say “history,” I want that to mean not only past events, as with political or social history, but also our literary and intellectual history. Art is one place where we can bring together things that are not usually simultaneously in view. How does it change the way one might hear the Texas state trooper’s characterization of Sandra Bland in 2015, if you think about it in light of a particular history of characterizations of black girls and women—one that goes back a few hundred years, at least, and makes an important appearance in the racial imaginary of a white Northern, abolitionist woman?

These kind of associations work in some ways like metaphors: the poet points to a similarity between things that are in other ways different. The power of a metaphor is sometimes felt in the shock of seeing a like-ness that was previously obscured by more readily apparent distinctions. I’m interested in the ideas that present themselves for consideration in the moment of uncovering that like-ness, while creating a poem, and in the moment of encountering it while reading or hearing a poem. I cast the net widely for these kinds of juxtapositions, letting my mind range among all the things it has absorbed and stored in a lifetime of my listening, reading, watching, thinking, and doing.

The question I feel like I’ve been skirting, but I ultimately have to ask, is how do you manage writing something this emotionally difficult? How do you, as the poet and as the person who has to get up from that writing desk and be around people and teach, etc., how do you handle it?

Honestly, the emotional difficulty of moving consciously through the world we live in is what sends me to the page, the desk, in the first place. I write for the same reasons that I might, at other moments, talk through a problem with a confidante or joke ironically about something infuriating with a friend or seek insight by asking questions of people who seem to have experience with these things. That is, I’m trying, in writing poetry on hard subjects, to not simply sit in my initial reactions, whether of anger or grief or despair, but find the potential for movement in them.

My point is not that we should delegitimize or “get over” these feelings, which are often the only possible response to the kinds of outrages and tragedies we are meeting with: from climate change to misogyny to racism to capitalist greed . . . . Just listing a few of the horrors and challenges drains the poetry from my soul. I write to recreate and regain that poetry—literally, as in poems, but also poetry as a metonym for the beauty and wonderment and grace and joie de vivre that also fuels the work we do to create the worlds we want to live in.

And going off of that, is form part of what helps you manage that emotional difficulty on the page? I’m thinking mostly of “keep your eye on,” which is continuously formally surprising page after page.

I wouldn’t say that I manage it, or that managing it is the goal. Rage is just as messy as racism is illogical. Grief is on its own program. Form can be a way of communicating this excess (not excessive) emotion. I’d also say that formal variety and shifts are a way for me to respond to the multifaceted issues we’re dealing with and the unremitting pace at which news hits us these days — which is part of what “keep your eye on” is about. As much as we seek surprise in the language or ideas of a poem, I also hope to be surprised by the formal demands a poem might make on me. That’s something else I can learn from or find pleasure in. My aesthetics — including this openness to both formal patterns and formal unpredictability — ask a lot of readers, who must be willing to imagine freedom within apparent constraint and to look for structure where there appears to be none. That won’t appeal to everyone. But they are aesthetics born out of my experience, the components of which are shared by many, so I hope there will be some readers willing to accept the invitation these poems offer.