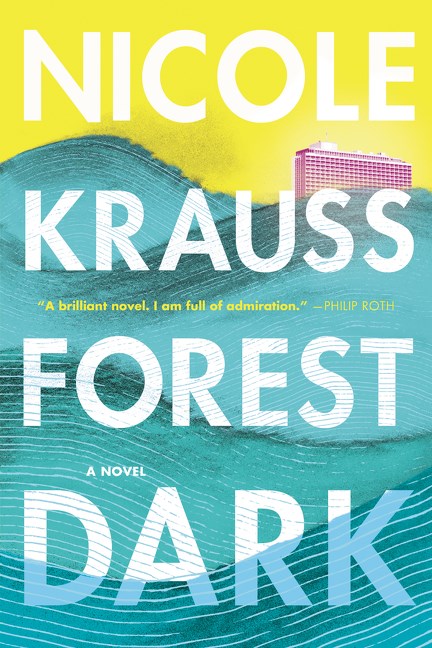 If you know anything about Nicole Krauss’s work, you probably know this: She writes beautiful, evocative, insightful, and often incredibly profound sentences. An example, from my favorite of her novels, 2005’s The History Of Love: “Once upon a time there was a boy who loved a girl, and her laughter was a question he wanted to spend his whole life answering.” What a simple but elegant sentence!

With The History Of Love, Krauss also showed she’s an adept storyteller via a complex, multi-tiered story, rendered with grace. It’s truly a masterwork.

Now, Krauss is back with a new novel — her first since 2010’s Great House. Forest Dark is really two novellas, connected by the theme of questing for meaning. Both of Krauss’s Jewish characters are struggling with life, and both decide to go to Israel to try to gain fresh perspective and puzzle out their problems.

First, we meet Jules Epstein, a wealthy, self-absorbed New York lawyer, whose parents have both recently died. This breaks something in Epstein, who divorces his wife and begins redistributing his wealth. He simply gives away his lifetime accumulation of possessions. And he embarks for Israel with $2 million to create a memorial for his parents, though he has no idea yet what that’ll be. Krauss sums up Epstein beautifully here: “He had rarely lifted his head above the powerful currents of his life, being too busy plunging through them. But there were moments now when he saw the whole view, all the way to the horizon. And it filled him equally with joy and with yearning.”

In the second strain of story, we see a blocked Brooklyn writer named Nicole, a mother of two children, at the tail end of an increasingly strained and probably failing marriage. (You may know that the real Nicole Krauss lives in Brooklyn, has two children, and is divorced from writer Jonathan Safran Foer.) Nicole (the character) travels to Israel, a place she’d visited many times growing up, to kickstart her creative process. In Tel Aviv, she meets a friend of a relative who tells her a wild story about some of Franz Kafka’s unfinished work. He proposes that she finish one of his plays as a screenplay so that it can be made into a movie.

Nicole is a profoundly introspective character, and Krauss plugs us directly into her brain with long, dense passages about everything from her weird sensation of being in two places at once to love and fidelity to her theories on narrative structure. For instance, here’s a meditation on storytelling and form — a passage from early in the novel that echoes throughout the rest: “Narrative cannot sustain formlessness any more than light can sustain darkness — it is the antithesis of formlessness, and so can never truly communicate it. Chaos is the one truth that narrative must always betray, for in the creation of its delicate structures that reveal many truths about life, the portion of truth that has to do with incoherence and disorder must be obscured.”

If you only had to read that once to understand it, and you liked what it means, you’ll probably love this novel. As well, if you possess more than a passing knowledge of Kafka’s work, you’ll probably get a kick out of what often reads like an inside joke for Kakfa fans. Personally, I was more impressed than delighted by Forest Dark. It’s poised and smart, but is it entertaining? Is that the standard by which a book is “good” or “bad”? I’m not sure. But even if you don’t always enjoy reading this novel, you can’t help but admire it.

Love and the Unknown in “To Be a Man”

The Isolation of ‘The Worlds We Think We Know’