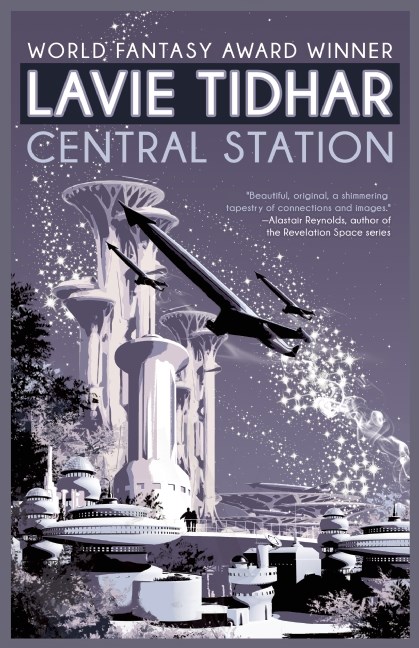 Reading Central Station by Lavie Tidhar feels like falling into someone else’s dream. Using a far future Tel Aviv as his canvas, Tidhar weaves an emotionally driven tale that interrogates the human impact of digital technology. The story is complicated, touching, and multifaceted. It left me with a not unpleasant sense of melancholy, as if I were leaving behind close friends who I wouldn’t be seeing for a long time.

Fans of science fiction and fantasy will relish the many hidden references to genre tropes and classics. Tidhar won the British Science Fiction Award, World Fantasy Award, and Central Station has been praised by heavy-hitters like Alastair Reynolds, Ken Liu, and NPR. He was kind enough to answer a few questions about his new book.

Eliot Peper: Science fiction is a reflection of the present as well as a vision of the future. It’s easy to draw parallels from elements in Central Station, like the Conversation, to some of the social and technological issues we all wrestle with today. What inspired the story? What ideas, questions, or themes did you explore with it?

Lavie Tidhar: Gosh, so many. It’s a bit of an optimistic future, really, isn’t it? I wanted to just write about ordinary people against this big science fictional background. To kind of have all those cool things but as scenery, almost. The book comes from a very contemporary place and time (specifically, the central bus station area of Tel Aviv, which is now home to both economic migrants and refugees) and I was inspired to write about it when I was living back in Israel for a while. Also, I do come from an Internet background, so the progression of communication and the way it affects our lives have been on my mind from an early age. It’s a novel about religion, communication, family — I wanted to explore the idea of the big extended family, which you don’t see in Western SF much but is very natural to me. Ultimately, I’d like to think it’s about love.

Eliot Peper: The story is full of lovingly rendered references to the larger body of SF/F. Who are some of the lesser-known writers that have influenced you? What’s the latest book you fell in love with?

Lavie Tidhar: I’d say Cordwainer Smith, most obviously. To me he’s probably one of the three most significant American science fiction writers of the 20th century, but he’s virtually unknown. Simak, too, with his pastoral SF. C.L. Moore. I don’t read that many genre books anymore — the last one I read was Alastair Reynolds’ Slow Bullets, which I liked a lot. The other thing you might notice in Central Station is also a lot of throwaway references to Israeli SF/F and pulps, which, I suspect, is as obscure as it gets! I just write these weird little jokes in to amuse myself, but it’s nice when someone picks up on them from time to time.

Eliot Peper: Central Station is relatively short as novels go, but it feels sprawling and inclusive, almost like a magic house that’s larger inside than without. What was your creative process like for the book? Did you outline or just start writing?

Lavie Tidhar: I worked on it, on and off, for about 6 years! It was my crazy little side project, basically. I’m still amazed it got published! It’s interesting working on it in chunks, because you’re plotting individual stories and then fitting them into the overall narrative — but I wasn’t going for plot much with this, I was taking a very different tack to my more commercial novels, and just exploring people, relationships. I was very much exploring as I went along. And it’s set in a wider universe I’ve been writing about, on and off, for over a decade, so it was easy to fit in a lot of material that, if you follow the thread, will lead to another story entirely.

Eliot Peper: Many of the chapters of the book were previously released as individual short stories, and were later modified and included in the novel. What structural considerations did you have in mind as you pulled them together? How did you go about weaving them into a narrative whole?

Lavie Tidhar: Central Station was always meant to be a single creation, but I was always fascinated by the old science fiction novels that were done as mosaics, that were sold as stories first — mostly it’s a way of getting a bit more money, really! But it’s quite a challenge to do, as I found out. What really happened was that, when I was finished with the sequence, it didn’t quite work, and I couldn’t quite pinpoint why. It took Tachyon’s support, and great editorial feedback, to help me find it, which I was incredibly grateful for — as I was getting pretty frustrated at that point! It was mostly technical — reordering the stories, I think we dropped one, cut one in half, and then smoothed the transitions, removed redundancies… it really was just normal drafting work, you know. 95% of it is the same. It was actually very soothing, once I knew what I had to do!

Eliot Peper: Intricate personal and social politics permeate Central Station. Reading it made me reflect on many recurrent news items. Did you have any goals for the story besides crafting a compelling tale? What role does speculative fiction play in our culture?

Lavie Tidhar: Well, it’s not for me to say! Obviously one aspires to Say Something, but it’s up to each reader to take from the book what they will (if anything). It occurs to me, as I move away from Central Station, that’s it’s quite a hopeful book in many ways. It’s what happens if humanity doesn’t destroy the planet and each other. One can only hope!

Eliot Peper is the author of Cumulus, Neon Fever Dream, and the Uncommon Series. He writes fast-paced, deeply-researched stories that explore the intersection of technology and culture.

Eliot Peper is the author of Cumulus, True Blue, Neon Fever Dream, and the Uncommon Series. His books have been praised by Popular Science, Businessweek, TechCrunch, io9, and Ars Technica, and he has been a speaker at places like Google, Qualcomm, and Future in Review. Eliot an editor at Scout, maintains a popular reading recommendation newsletter, and advises entrepreneurs and investors on technology strategy.