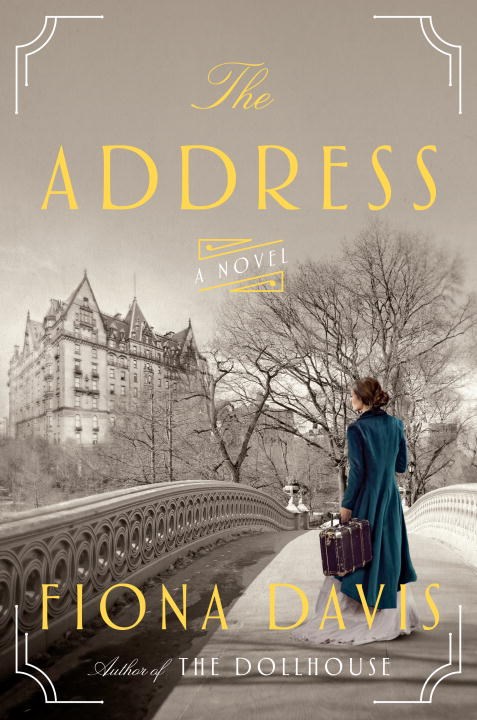 Canadian-born, New York City-based novelist Fiona Davis has discovered a winning formula for her fiction: pair the history of a real-life landmark building with the imagined lives of those who might have lived or worked there, and structure the story as a dual narrative with alternating time periods. As a technique for making interesting socio-historical comparisons, this approach worked well for her debut novel, The Dollhouse (2016), a story about New York City’s Barbizon Hotel and its fictional inhabitants. And, happily, it works reasonably well again in her second novel, The Address, a thoroughly engaging read with elements of romance, mystery, and tragedy.

The building at the center of this novel is the Manhattan apartment house the Dakota, a prestigious Upper West Side residence opened in 1884 and made infamous almost a century later as the location of John Lennon’s murder. Similar to The Dollhouse with its two female protagonists from different eras, The Address features two women — Sara Smythe, the head housekeeper at London’s Langham Hotel who comes to America in 1884 to work at the Dakota; and Bailey Camden, a young interior designer struggling with addiction and trying to make a decent life for herself in the New York of 1985. For these two women, the Dakota becomes a place of critical importance to their personal histories, as a site of both ruin and of promise.

When Sara arrives at the Dakota and is immediately promoted from housekeeper to the role of “lady managerette,” she is befriended by the building’s architect, Theodore Camden, a married man whose family will soon take up residence there. As the novel progresses, Sara becomes increasingly enmeshed in Theo’s life. Predictably, and against her better judgment, a romance ensues and Sara becomes pregnant, an unthinkably shameful situation for an unwed woman in the 19th century. When she is accused of theft, her fall from grace is complete: she is declared mad and thrown into Blackwell’s Island Insane Asylum. Here Davis includes another fascinating historical aspect in the narrative, even introducing the investigative journalist Nellie Bly into the story, whose reporting on the deplorable conditions in the asylum was responsible for further investigation and significant improvements.

Bailey’s half of the story, while not as eventful or compelling, is essential to explaining what really happened to Sara, Theo, and their child a century earlier. Bailey is the great granddaughter of Theo’s ward, Christopher, so her ties to the Camden family are strong, if not biological. After returning from rehab broke and unemployed, she is invited to stay at the Dakota and lead the renovation of the Camden apartment, currently owned by Melinda Camden, Theo’s great granddaughter and heir to his fortune.

As Bailey begins to dig into the past, however, and conveniently finds mysterious items stashed away in old trunks belonging to Sara, Theo, and his wife, the structure of the Camden family tree and the accepted story of Theodore Camden’s death begin to crumble. Was Sara really insane, and did she kill Theo in a crime of passion, as she was accused of doing? Was Christopher Camden merely Theo’s ward, or something more? To which family does Bailey truly belong? By the novel’s midpoint, Davis has provided sufficient clues for an attentive reader to anticipate the answers, but there are still a few twists and turns to enjoy.

The Address is not a serious novel in the sense that it makes grand statements about women’s lives, but it does effectively point to and question class and gender divisions in both time periods. Sara, for instance, is herself the product of her mother’s affair with the Earl of Chichester, making her illegitimate in the eyes of society. “‘My mother was his housekeeper,’” she says, “‘He would never recognize me as his daughter.’” And, early in their romance when Theo asks Sara, “‘Do you not think you could move up in the world?’” Sara is surprised by his naiveté and thinks, “Of course a woman could not move up in the world.” She tells him, “‘It’s easy for you to think so, but there are very clear delineations. Here as well as in England.’” Unfortunately for Sara, 19th century society’s rigid rules and expectations suggest the likelihood of her recovering from her tragic downfall is nonexistent. Bailey, too, so many years later, faces her own struggle as the poor “cousin” in the Camden family, trying to discover the truth about her birthright and relying on the kindness of the mercenary Melinda and her Oxford-educated boyfriend, Tony. In contrast to Sara’s situation, though, Bailey’s transgressions will not be her ruination; she will have the opportunity not afforded to Sara to make a fresh start.

Everyone’s a Critic in “We Play Ourselves”

Davis is unquestionably a skillful storyteller and historian, and apart from a few overwritten, melodramatic moments and a contrived ending to the novel that can be summed up in Sara’s words, “Men betrayed, women endured,” The Address is a fine follow-up to her first novel and an indicator of strong work to come.

‘All Grown Up’ is a Snarky Take on the NYC Novel