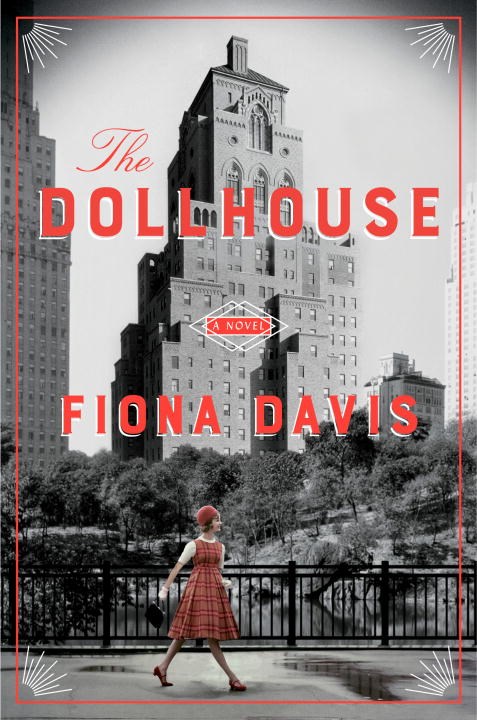 Rose Lewin is a journalist in her mid-thirties who moves into the former Barbizon Hotel in 2016 and begins digging into the past of her mysterious downstairs neighbor, Darby McLaughlin. Darby first arrived at the Barbizon as a 17-year-old in 1952, back when it was a reputable hot spot for aspiring young models, actresses, editors, writers, and secretaries—“a bevy of princesses holed up in a high tower.” Darby now resides in a rent-controlled apartment directly below the condo occupied by Rose and her boyfriend, Griff, a successful politician and divorced father of two. The Barbizon itself, with all of its former glory and glamour, comes to life in the novel—serving as a lens into the past and providing a strong link between the two women as the story moves back and forth between Rose’s perspective in the present-day, and Darby’s perspective in 1952.

The highly compelling, real-life setting both makes and breaks The Dollhouse. The rich history of the Barbizon and the legacy of iconic women like Plath, Didion, and Bergen sucks you in. Unfortunately, the fictional tale that Davis spins doesn’t quite live up to the legacy of its rich setting, and left me wanting more historical and feminist cultural analysis.

Still, the first half of The Dollhouse is packed with potential. The dual narrative structure, which Davis pulls off so well, sets the book up perfectly to invite comparison between these two generations of women. And the novel does raise some important questions about the work that remains to be done in terms of breaking down traditional female roles. As Rose begins to investigate the “‘denizens’” of the Barbizon, she sets out with an admirable goal:

“Did you know the Barbizon used to be called the Dollhouse? Can you get more objectifying than that? As if these women were simply playacting until the magical powers of marriage turned them into living, breathing people. I want to humanize them, include photos of when they were young, descriptions of what their lives were like. Just because they don’t look fresh-faced anymore doesn’t mean…that they’ve lost they’re worth as human beings.”

I love the irony in the fact that Rose—a modern-day woman who sets out to investigate how much has changed for women since the 1950s—is revealed to be less liberated than Darby in a few key ways. For example, the novel opens with Rose cooking dinner for her boyfriend, hoping that he is about to propose. Darby, on the other hand, arrives at the Barbizon in 1952 determined to make a living for herself, so that she won’t be forced into the trap of an unhappy marriage the way her mother was.

Rose initially feels sorry for Darby, an old lady who lives alone with her dog and hides her scarred face beneath a veil. But, surprisingly, Rose is the one who gets suckered by the false promise of marriage. After getting dumped by her successful older boyfriend, she becomes financially crippled and essentially homeless, having given up her former high-paying job and beloved apartment to move in with Griff.

She’d end up like Darby, living in a cave, no family left to worry about her or care for her. When sad-old-lady Rose, homeless and ancient, hobbled down the street, young women would look away quickly, worried that her fate would be theirs.

Without being heavy-handed or didactic, Davis invites us to wonder: Just how much progress have we made since the post-war era of the 1950s and 1960s? How can we resist falling back into the same old patterns and stereotypes? However, she doesn’t really attempt to answer these questions. Although The Dollhouse touches on several important social issues (e.g., rape, homosexuality, racism, classism, and of course sexism), it fails to explore their complexities on a deeper level—leaving this reviewer unsatisfied.

Just as Rose gets sidetracked in her research by the juicy murder mystery (and love story) that begins to unfold, so too does the novel as a whole. The story gradually switches gears to focus more and more on a conflict that occurred between Darby and a former Barbizon maid/aspiring jazz singer back in 1952, which left one woman dead and the other scarred for life. As Rose digs deeper into the Barbizon’s (and Darby’s) past, she struggles to maintain her journalistic integrity, and come to terms with the idea that she might end up growing old alone.

In many ways, The Dollhouse is a success, proving Davis to be a promising novelist. It contains some really interesting feminist cultural analysis that is, at times, subtle and surprising. Though the book doesn’t quite live up to the historical legacy of the Barbizon Hotel for Women, it does succeed in breathing color and life into the old building. Fiona Davis’s The Dollhouse is a quick, fun read with a pleasing element of mystery wrapped up in a truly unique and intriguing setting.

The Faces of Feminism: An Interview with Barbara Bourland on “The Force of Such Beauty”