Expanding the Definition of Poetry at ‘Breakwater Review’ 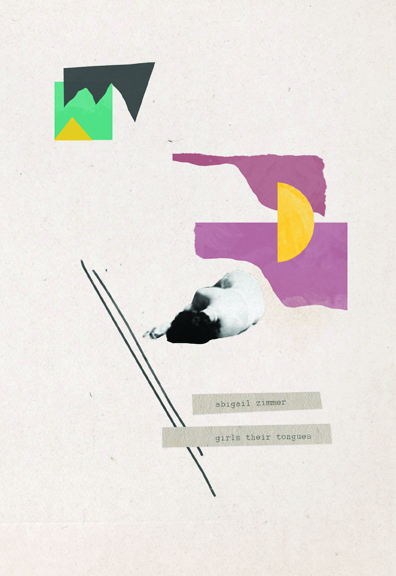 Abigail Zimmer’s first full-length collection of poems, girls their tongues, came out with Orange Monkey Publishing earlier this year. Reviews have been glowing. Chicago artist and writer Jill Magi notes the book’s remarkable pacing: “the work defies the assumption that poetry should slow things down.” That speed is felt with poems that traverse the page, engage with narrative, work with humor, and move through exciting repetitions. Zimmer is also the author of chapbooks fearless as I seam and child in a winter house brightening, which won the Chicago Review of Books’ 2016 Poetry Award. I recently spoke with Zimmer via email about her “action-packed” approach to poetry.

Sarah Blake: I often feel like poetry lives in the head, the mouth, and the ear, but this book is so rooted in action. It even has a mild obsession with infinitives, with lines like, “to pluck to sound to dig,” which ties into that action for me. I love it. What draws you to action for your work?

Abigail Zimmer: Probably the fact that I can’t sit still when I write! Even now, I’m in and out of my chair, watering the plants and raising the blinds and pacing my small apartment (with apologies to my downstairs neighbors). I like watching how people move and position their bodies. Verbs have their own range of emotions behind them. The book has a cast of strange characters and I think the most immediate way to get to know them is through their movements, with few interruptions or interpretations from me.

Sarah Blake: The poems in girls their tongues are so playful and strange. They remind me of Charles Simic’s and Matthea Harvey’s prose poems, but with a little Bieber thrown in. Will you talk about some of your stylistic choices in this book?

Abigail Zimmer: I wanted the book to be a collection of voices, of many speakers. And so as the speaker shifts from poem to poem, so does the form. There is a series of “portrait” poems, which start out as fragmented prose blocks and sparse lines and gradually move into more fluid paragraphs in the way that someone who’s grieving learns to speak through absence. Another set of poems I think of as my “pageantry” poems. Around the time I began compiling this manuscript, I was struck by the strangeness of a 1950s photo of a beauty pageant in which Miss New Zealand had collapsed (her collapsed figure is on the book’s cover). It’s an eerie photo capturing the participants’ genuine concern and performative smiles, so I began writing these faux interviews, acceptance speeches, and personal statements which took on other forms.

Sarah Blake: Some of the stand-out moments in the book for me are the poems: “It’s Helpful to Know Basic Geometry When Your Radian Misfire,” “Reception,” and “Reduce the Scene and Stage.” What a delight to have math, an art opening, and Italian opera make appearances in this book. How did these influences find you and make their way into the book?

Abigail Zimmer: Very randomly. For “Reduce the Scene and Stage,” I flipped on the radio in my car one day and the first words I heard became the first line of the poem: “And the other thing about Italian opera…” I thought: this is a whole genre I know nothing about within another genre I also know nothing about. To be honest, I still haven’t learned anything about Italian opera—I guess I made up my own world from there. But I am interested in the language of very specific fields of knowledge. While visiting several art museums around the same time, I started writing down phrases in the paintings’ commentaries. The language felt too distant and remote for what I imagined to be an emotionally vivid process of expression by the artist (in the way that writing a poem is), and I wondered how this passive language of analysis would feel within the everyday of the artist’s life. The language of math has the same coolness to it (or maybe just to me? I’ve never liked math . . . ), so why not infuse a falling apart relationship with math terms and see what it changes.

Sarah Blake: My favorite recurring characters are the sisters, especially their last occurrence in the book: “there is no limit, they think, now that we are thieves.” How did they function in the book for you?

Abigail Zimmer: Sisters are such an exciting relationship to me, more so than other familial or friendship relationships because they are both/and. They are friends, but not always. They’re in the same boat, shaped by a similar environment and learning their way out together. They’re co-conspirators and adventurers and navigators. But they also fall into roles of leader, defender, rival, caregiver—and each respond to the world according to their own personalities and habits. These sisters are coming into their own, and their thread through the book follows their examination and shaping of their world.

Sarah Blake: In terms of craft, one of my favorite things about the book is how it doesn’t fear repetition. What’s your relationship with repetition? Do you fight with it or call it out?

Abigail Zimmer: Call it out! I mean, who isn’t waiting for the chorus to come around so they can join in? Repetition has the familiar comfort of home, helping the speaker remember how the story goes or anchoring the listener when her mind wanders. And I like working within a framework. Sometimes that’s repeating a form to see where a second poem could take it or just returning to a line. But for repetition to remain interesting, it has to surprise. To appear where I don’t expect it or in a slightly different iteration. To change emphasis and propel the poem forward. You can return, but some understanding has to have deepened.

Abigail Zimmer is the author of girls their tongues, fearless as I seam, and child in a winter house brightening, which won the Chicago Review of Books 2016 Poetry Award. She lives in Chicago where she is the poetry editor for The Lettered Streets Press. Her work has appeared in NightBlock, Jellyfish, ILK, The New Megaphone, Fairy Tale Review and alice blue review, among others.