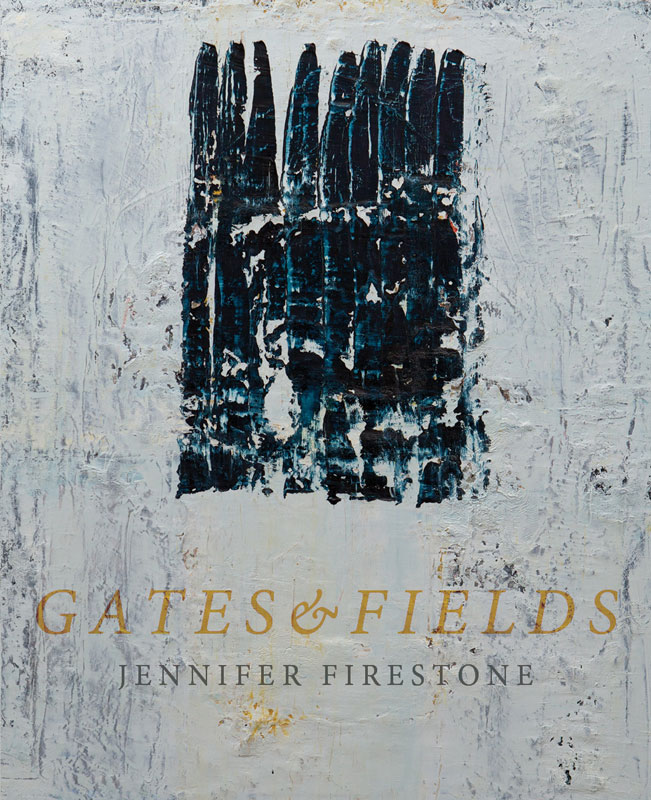 I want to write that Jennifer Firestone’s new book, Gates & Fields, is a unique reading experience, but that reduces it to a curiosity. I want to write that there is a feeling in the pit of my stomach when I read Gates & Fields that is something like sadness (for it is a book about grief), and something like excitement (for it is a book with few equivalents), but that, too, feels inadequate. I want—and have been trying—to write about Gates & Fields without naming my own grief because my own grief feels beside the point or not big enough, but I can’t do that either.

Gates & Fields is an elegy in nine extended lyric sequences for four specific people who all died in a four-year period. Firestone names them and dedicates her book to them. However, the book is also an elegy for all of the dead that readers bring to the book. For me, this includes two grandmothers, a grandfather I never knew, several friends, and a cousin, as well as countless friends I no longer know. Firestone’s openness is astonishing.

Grief is nearly unbearable because it encompasses so many feelings: sadness, shame, fear, loneliness and, sometimes, different kinds of relief. Grief, writes Firestone, is “Guilt and other small planets colliding.” Grief brings us closer to our loved ones while pushing us farther apart. In the wake of one grandmother’s death, I wanted to keep making art, to think my way through sadness, but felt I should be with my family. After my cousin took his own life, I wanted to be near my family, but didn’t know what to do when I was. “Afraid to touch the skin of those so close / Embracing becomes more difficult.”

It is out of grief that Firestone builds a world for these poems. She creates a reading experience that is much like walking through fog: people and objects seem to rise up and then disappear. “The language is failing at its first birth,” she writes. Reading Gates & Fields sometimes feels like you’re a ghost following a path meant only for the dead and dying, so us non-dead can be made to feel insubstantial. It’s as if we are outside of time, yet unable to remove ourselves from time. The experience of Gates & Fields is similar to Nathaniel Farrell’s Newcomer (2014), perspectives and time clashing and creating slippages. Firestone writes:

Firestone rarely uses punctuation, and her gaps and line breaks create edges that air could whistle through. Questions and sentences run into one another. “A gate might open / To a gate,” she writes, meaning both that there might be a second gate and that the first gate only might open.

“The body fixed / Unsettles / The mind” —clarity comes and then dissipates just as quickly.

I want to write that this book is pleasurable to read, but that feels strange to say about an elegy. Yet Firestone’s images and repetition are comforting, beautiful, and surprising. In the second piece (of three) titled “She,” Firestone writes:

And in the yesteryears when days seemed long

A bell around her very neck

We were there saying come what you are

We were there saying

“A bell around her very neck” chimes out of these lines, striking a clear note in the passage. My own experience of sorrow is such that in order to feel something other than sorrow, I need a small shock—of the familiar, the unfamiliar, or the exact. Though once jolted out of sorrow, it is only a matter of time before I slide back into the long days of “yesteryears” and the chant of “come what you are.” These sorts of hums, jolts, and melodies are typical of Gates & Fields.

Like grief, the images and language here change with time and context, but they never arrive at anything tidy like closure. The book opens with a scene that might be familiar to anyone who has watched a loved one’s health deteriorate. Despite wishing that they would continue to live, you give them permission to die:

They are telling her it’s time to go

The carriage set upon the snow

To go to go they wail so the white snow

Falls onto the white snow

This begins the layering of images, phrases, and sounds throughout the rest of the book, Firestone folding and refolding the language like bread dough: “The field this way and that, the field arising / The field footholds, the field of an eye and mind.”

Grief never really ends; it evolves: at first, routine is taxing, and then gradually it becomes manageable. Every once in awhile the realization that a loved one will never experience the joy or surprise or beauty that you’re feeling comes into focus like the peal of a bell through the white noise of a town. Gates & Fields is “a bell around [my] very neck.” Firestone writes, “Loss becomes tangible post-loss.” She tries to hold onto that loss, tries to help us hold it, but as soon as you get a grip, the grief changes shape or texture and slips out of your grasp. I want to introduce this book to you, because it touched me, because it was the book I needed, because it contains all of my grief and could, if you let it, contain yours.

Jennifer Firestone is an Assistant Professor of Literary Studies at The New School. In addition to Gates & Fields, her books include Flashes (Shearsman Books), Holiday (Shearsman Books), Waves (Portable Press at Yo-Yo Labs), from Flashes and snapshot (both from Sona Books), and Fanimaly (Dusie Kollektiv).  Firestone also co-edited (with Dana Teen Lomax) Letters To Poets: Conversations about Poetics, Politics and Community (Saturnalia Books),  and co-authored LITtle by LITtle with photographer and urban geographer, Laura Y. Liu.