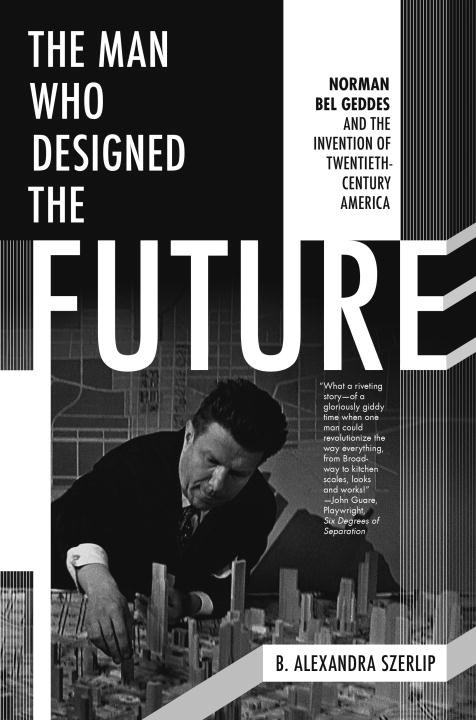 At school in 1908, ninth-grader Norman Geddes spied a clean blackboard, colored chalk, and his chance. He quickly drew a mural that featured the superintendent, principal, and his teacher riding on donkeys with handlebars for ears. Classmates, doves, and flowers completed a ten-by-three-foot panorama. The artwork brought the curtain down on Geddes’s academic career.

The Man Who Designed the Future: Norman Bel Geddes and the Invention of Twentieth-Century America is the story of a post-school life both utterly singular and deeply emblematic. Bel Geddes may not quite have invented the future, but between 1914 and 1958 he had a lot to do with how millions of Americans came to understand, envision, and desire it.

To call Bel Geddes eclectic sells him short. He was a theatrical set and costume designer as well as a director and producer. Over the course of his life, he was also an advertising artist, industrial designer, architect, urban planner, military historian, futurist, author, and teacher.

After leaving school shortly after he began ninth grade, Bel Geddes didn’t have formal training for any of these roles. What he did have was fortunate timing, boundless imagination, marketing zeal, and—playing against type—organizational skills. He became a blazing utopian seer of America’s post-World War II mobility and its flood tide of consumer sovereignty. The future that Bel Geddes brought to life featured efficiency, prosperity, social harmony, peace, and ecological stability. For Bel Geddes, the last had resulted from nature’s growing compliance with humanity’s industrial designs.

B. Alexandra Szerlip does an excellent job in kneading this outsized life into a well ordered and engaging narrative. The Man Who Designed the Future is strong on the nuts and bolts of an unthinkable workload fueled by vast ambition. She describes numerous projects in detail and offers crisp recreations of Bel Geddes’s interactions with a wide swath of people: actors, musicians, business and financial people, producers, craftspeople, friends, and family. (He adopted the “Bel” from his first wife’s first name.) Szerlip gives full rein to Bel Geddes’s strengths without brushing aside his paradoxes. She is less successful in addressing what his work signified about America or how the future that unfolded was different from his vision. Her emphasis seems more a product of choice than neglect. Given Bel Geddes’s kaleidoscopic career, there’s a real danger of overly facile links across all those interests and years.

Bel Geddes was born in 1893 in Michigan, and by his late teens he was apprenticing in set and costume design in Detroit. In 1916 he was in Los Angeles, doing his first major set design project for a play titled Nju. Soon after it premiered he was in New York, where he sought out the support of financier Otto Kahn, whose Manhattan townhouse spanned five floors and had 74 rooms. Kahn, who had helped support author Hart Crane, dancer Isadora Duncan, and the legal team that defended Ulysses, opened a few key doors. Suddenly, Bel Geddes’s star was rising.

Szerlip shows how Bel Geddes’s frenetic work in theater during the 1920’s—a hand in about two hundred productions—remained his creative foundation. His trademarks soon became evident: bold creativity, tireless effort, and an ability to conceive projects on a massive scale. For a 1924 production of The Miracle, Bel Geddes converted a theater into a replica of a medieval church. The production required “2,000 costumes made by 100 seamstresses…two tons of stage snow, one million feet of wood, more than 900 draftsmen and workmen, forty electricians, dozens of stagehands, twenty-two assistant directors and a cast of 700.” To the equally massive relief of its backers, The Miracle was a big hit.

In 1927, Bel Geddes set up shop as an industrial designer. His first jobs included designs for garters, a fountain pen, a shaving brush, a fly swatter, and a legless grand piano. Larger clients, such as camera manufacturer Eastman Kodak, and Texaco, the oil company, soon followed. In 1933, he was commissioned by Chrysler to design its car of the future. The result was the Airflow, about which Szerlip dryly notes, “To say that it was ahead of its time is to damn it with faint praise.”

The Airflow was just an opening shot. For the 1939 New York World’s Fair Bel Geddes created an exhibit of the United States in 1960. His “City of Tomorrow” was home to 100,000 cars traveling at up to 100 miles per hour with flawless traffic flow and utter safety. Even at those speeds, motorists could appreciate a world beyond the city of pristine farmland powered by limitless cheap energy. Bel Geddes’s vision of the U.S. in 1960 was culturally sophisticated and politically placid, with history’s rough edges smoothed by jaw-dropping advances in technology and the vast prosperity they enabled.

Neither the Depression nor World War II slowed Bel Geddes down, but after Hiroshima and Dachau, his relentless optimism and faith in technology looked increasingly out of step. He died in 1958 at 65 after a heart attack—an archetypal slayer of postwar over-strivers. The timing and manner of his death somehow fit.

Szerlip’s book is about a nearly manic careerist who had true faith in the power of human imagination well harnessed to a corporate model. After showing us what could be, Bel Geddes exited the stage at the high summer of an American future he had envisioned in fine detail long before we lived it.

NONFICTION – BIOGRAPHY
The Man Who Designed the Future: Norman Bel Geddes and the Invention of Twentieth-Century America by B. Alexandra Szerlip
Melville House
Published April 25, 2017

B. Alexandra Szerlip was a two-time National Endowment for the Arts Writing Fellow, a Yaddo fellow, and runner-up for London’s Lothian Prize for a first biography-in-progress. She has contributed to The Paris Review Daily and The Believer, among other publications, and has worked in professional theater, as a book editor, sculptor, and graphic designer.