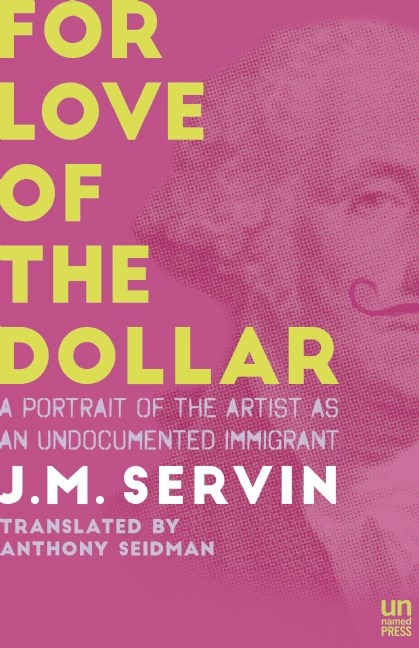 While researching 2017 books for the January feature 10 New Books to Help You Survive the First Six Months of Trump, J.M. Servín’s memoir For Love of the Dollar: A Portrait of the Artist as an Undocumented Immigrant was one of the first books I chose. In light of Trump’s rhetoric, a book revealing the plight of a Mexican immigrant to America seems essential. Further, Servín’s book is published by Unnamed Press, one of my favorite small presses that publishes true literature.

Translated by Anthony Seidman, For Love of the Dollar tells the story of J.M. Servín’s experience as an undocumented immigrant in America over the course of a decade. A Mexican “gonzo journalist,” Servín is the author of a half-dozen books, both fiction and nonfiction, and has won the National Prize for Testimonial Writing and the Fernando Benítez National Prize for Cultural Journalism.

On July 4, 1993, Servín emigrated to America by plane, with a tourist visa. His sister had arrived three years prior and he was able to move in with her to a place in the South Bronx. Servín left Mexico where he was employed and his plans for his life in America were vague:

I had never come up with any specific goals apart from having a few bucks to keep myself afloat. In reality, far from the tragedies marking the routes of the average day-laborer, my perception of work rested on the experiences of my father in Rosenberg, Texas, twenty-three years ago. He never complained nor mentioned any insults or abuse.

Servín works a variety of jobs during his time in America—in kitchens, gas stations, golf courses, and as a nanny in Connecticut. Throughout the memoir, he reflects on these experiences and those of an undocumented worker in general:

The trick was to grin and bear it. Bosses liked inexhaustible workers who kept their mouth shut. No one would investigate about anyone else’s experience, because they were all identical. And for each poor soul who had a tragedy to share, there was someone else with an even more gruesome Calvary. I lived surrounded by tough types, in a religious sense, Jesuit-like, ready for the most absurd sacrifices as long as they could get a pot to piss in.

But the lens through which Servín processes life in America is larger than just his work experiences. He also paints a unique portrait of New York City in the 1990s, from violence to  the sex industry. He visits a peep show in Times Square and explains, “Part of my morbid hedonism served to dull the pain and frustration of working as a day laborer.” He also tells the story of Monika Beerle, a 24-year-old ballerina who was murdered before Servín came to America, a gruesome, fascinating tale that feels a bit out-of-place here.

While many books about immigration are rife with struggle and pain, Servín’s story is primarily one of happenstance and serendipity. He finds a job that pays “the most an undocumented worker can hope to get,” and ends up working for a family who takes him to Europe. When Servín does struggle, he doesn’t ruminate on it. Nevertheless, For Love of the Dollar is a strong and compelling portrait of one person’s experience — and perhaps that’s exactly what the country needs right now, an honest, human account of an immigrant’s attempt to reach for the American Dream.

The Haunted Child of “Nuclear Family”

J.M. Servín is an author of a half-dozen books of fiction and nonfiction. He won the National Prize for Testimonial Writing in 2001 and the Fernando Benítez National Prize for Cultural Journalism in 2004. His novels, short story collections, and memoirs — including For Love of the Dollar — have all been named books of the year by Reforma newspaper. After a decade in Mexico City, he now lives in the city of Oaxaca, where he coordinates the narrative journalism project Producciones el Salario del Miedo.

Tags
For Love of the Dollar JM Servin Unnamed Press