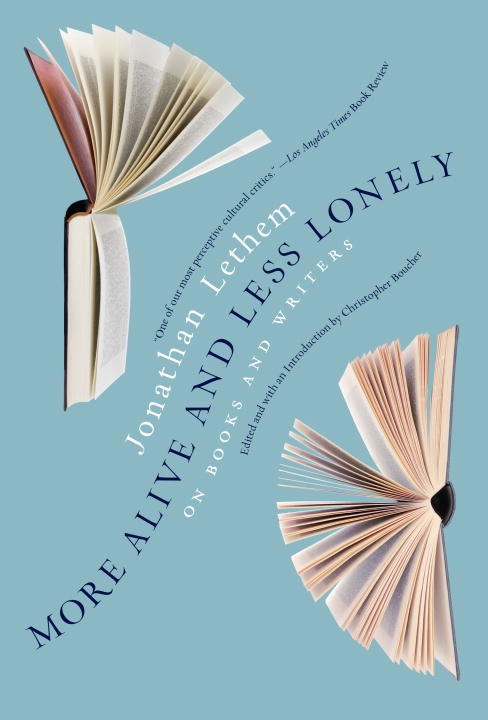 The ineffable and prolific Jonathan Lethem has struck again, this time with his delightfully engaging second collection of essays More Alive and Less Lonely: On Books and Writers. This collection is nearly twenty years of essays that explore Lethem’s relationship with and love of the written word. Some essays analyze Lethem’s favorite writers, and others ponder the form and style of certain genres. The essays are divided up into sections, but they’re all so approachable that I found myself flipping around and reading out of order.

I was constantly reminded why Lethem is a beloved writer in the literary world, both because of his deep understanding of the craft and because of his own skill in it. There is a beautiful blend of academic mulling and creative playfulness that makes up each of these essays, and I found myself taking notes left and right. Dedicated Lethem fans will recognize many of these previously published essays and reviews, but they will also be treated to some new pieces, as well.

I recently spoke with Lethem, and he shared his thoughts on experimental writing, his passions, and a June 2017 reading recommendation.

Sara Cutaia: What was the process like putting together two decades of essays? Daunting? 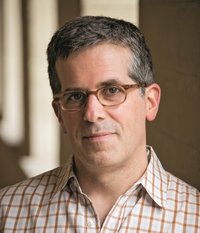 Jonathan Lethem: It would have been, yes — but I threw myself on Christopher Boucher’s mercy instead. The fact that it says that it was “selected and introduced” by Chris isn’t incidental — I really did push a large and unruly mass of my uncollected essays in his direction and then recuse myself from judgment. I knew there was enough material (there was twice as much as Chris included, in fact), and I knew I wanted a book to exist, but after the long and twisted journey that had been my last encompassing essay collection, The Ecstasy of Influence, I couldn’t have imagined undertaking it myself, at least not for a long while yet.

Sara Cutaia: The meaning I take from title of this collection is very comforting: books, and living within them, can help you feel more alive and less lonely. Where did the title come from?

Jonathan Lethem: Yes, it imparts a very consoling feeling — one in which I do believe, at least on alternating days. (On the other days I suspect that my addiction to books has made me odd and abstract, that I wear them like a kind of muffling armor that estranges me from the human realm). Again, I have to point to Chris, who found the phrase lurking in one of the essays (I can’t remember which one!). I love the title a lot, and I’m proud to have it as one of my own, and at the same time to know I’d surely never have arrived at it myself. In this it resembles some of the titles that my books have been given in foreign countries, which, when I hear them translated back into English, aren’t mine, but delightful. As She Climbed Across the Table, for instance, in Italy is called Unidentified Love Object.

Sara Cutaia: Your footnote essay that dives into David Foster Wallace especially amused me. Is there another experimental form that you’ve started to notice evolving in literature that you either like or dislike?

Jonathan Lethem: Well, I should first quibble with the term “experimental”, which never seems right to me for any of the many formal innovations of literary Modernism and Postmodernism, all of which can traced to earlier moments of innovation (or, perhaps, ‘experiment’) but are to my mind now just among the elements, the palette or playthings, available to the contemporary writer. They don’t really require any audacity or bravery or experimental imperative to put into use — they’re in the toolkit now. Footnotes-in-fiction certainly fits this description. So do some other prominent formal moves that I like, and sometimes employ myself — the short story in the form of a list, or disguised as some other more utilitarian piece of writing, like the recommendation letter, or the interview. Of course the value is always proven in the particular, not the general case — you have do something interesting and stirring with these gestures, or they’re no more better than conventionally-written uninteresting stories.

Sara Cutaia: Gambling, film noir, baseball, science fiction, gentrification history, Kafka and Roth — it seems you’ve explored and enjoyed such a diverse and wide spectrum of topics. Is there another passion with which you’ve always been fascinated but haven’t written about yet?

Jonathan Lethem: You’re right that I haven’t held back — my essays and also my fiction make a pretty extensive compilation of my pleasures and curiosities, and there’s nothing I’ve been strategically or shamefully leaving undisclosed. Sometimes I look at what I’ve worn particularly on my sleeve and I wonder why so much of one thing and not the other — for instance, I’m always retailing my love of film noir, but I’ve barely ever written about Hitchcock, who’s been a lifelong obsession. I guess I’ve said very little about my interest in animated film — Disney, Fleischer, Ralph Bakshi, Jan Svankmayer, etc. — as compared to how I’ve worn comic-book-fandom on my sleeve. And so forth. Also, very few people realize how much time I spend looking at cat videos on YouTube. Expect a major statement on that subject soon.

Sara Cutaia: You’re clearly a lover of the written word in all its forms: you’ve penned short stories, magazine articles, critical essays, novellas, novels, and a lot in between. But surely you have a preference, both in writing one of these modes, and in reading?

Jonathan Lethem: Yeah, for me that’s an easy one: I’m a novelist, in my bones. I’ve done all those other things you mention, and sometimes I’m amazed at how much interest I’ve developed in other forms and genres — but the novel is my home, I think and live inside the architecture of a novel, and I usually feel I’m slightly off-track in my life if I’m not working actively on a new one.

Sara Cutaia: I noticed the style and voice of your essays change throughout the years, and was then delighted to find that you speak directly to this in Footnote on Ishiguro, saying you decided to keep some of these “embarrassing” pieces in the collection because “I still feel that in writing the piece, I arrive somewhere I like, and like sharing…” I’m wondering if you noticed a trend, universally, in writing reviews that gradually changed over time, or if maybe it was just a learning process for you as a writer?

Jonathan Lethem: Well, it’s nice to live and write long enough to have things that embarrass you that are still — I think! — interesting enough also to collect and republish. Studying my own changes is a solipsistic sport, and I mostly try to avoid it, but every now and then some genuine energy comes out of such indulgences. My model for The Ecstasy of Influence was Norman Mailer’s Advertisements For Myself, and in each case those books are devoted to an unembarrassed grappling with questions of “who was I am who have I become, as a writer, and what does it all add up to?” So in that book I learned to embrace that awkward mode of self-reflection. By asking me to comment on a few of the pieces he was collecting, I found myself going back to it here and there in the three or four short pieces called “footnotes” in More Alive and Less Lonely. Much of what you call “a learning process” in my critical pieces is maybe not so much in the area of deepened wisdom or capacity but more along the lines of relaxing into the task, finding ways not to strain unnecessarily.

Sara Cutaia: I was awestruck by the breadth of titles and authors you’ve written about over the years especially as I’d not heard of many of them before. I now have quite a few new books on my TBR list, as I’m sure many others who read this collection will, too. Similar to your love of The Happy Valley and its relatively quiet existence, what’s one book from this past year that you’re sure hasn’t gotten enough recognition but that you would recommend?

Jonathan Lethem: First, I’m delighted by your description here — a list of enthusiasms, a bookshelf of possibilities; that’s my best hope for how a book like this would land. May I mention a forthcoming book instead? Eugene Lim’s Dear Cyborgs, which I just read in galleys, blew me away with its deceptively blithe mixture of cryptic humor, philosophical ingenuity, and genuine political yearning. It made me think of Robert Bolano and Tom McCarthy. I’m hoping to reread it soon for inspiration, and I hope it makes a splash out there in this overcrowded world.

JONATHAN LETHEM is the New York Times bestselling author of nine novels, including Dissident Gardens, The Fortress of Solitude, and Motherless Brooklyn; three short story collections; and two essay collections, including The Ecstasy of Influence, which was a National Book Critics Circle Award finalist. A recipient of the MacArthur Fellowship and winner of the National Book Critics Circle Award for Fiction, Lethem’s work has appeared in The New Yorker, Harper’s Magazine, Rolling Stone, Esquire, and the New York Times, among other publications.

Editor CHRISTOPHER BOUCHER is a professor of English at Boston College, editor of Post Road magazine, and author of the novels How to Keep Your Volkswagen Alive and Golden Delicious, both from Melville House.