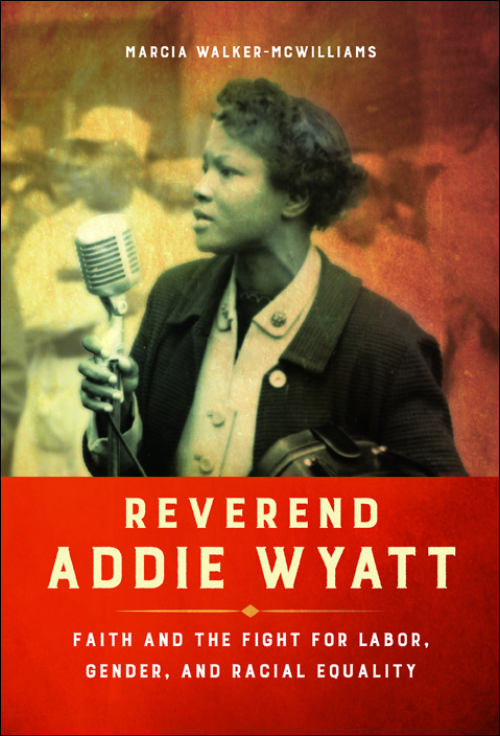 The faces of three black women organizers, Alicia Garza, Patrisse Cullors and Opal Tometi, are the images of Black Lives Matter, a social movement challenging the persistent and pernicious devaluing of black life in America. Bree Newsome, another female black activist, scaled a flagpole in South Carolina to take down an enduring symbol of racism, the Confederate flag. Just before climbing, she recited the 27th Psalm and the Lord’s Prayer.

If one were to imagine a patron saint for activists whose fight for justice has been sustained by an abiding faith, one might turn to Reverend Addie Wyatt.

Marcia Walker-McWilliams’ Reverend Addie Wyatt: Faith and the Fight for Labor, Gender, and Racial Equality discloses the rich history of an “intersectional” trailblazer, whose activism arose from a consideration of intersectional identities long before the term gained wide currency among academics and activists. Rev. Wyatt was familiar with writers taking interest in her involvement with social justice movements, but Walker-McWilliams’ focus on her life was new. Expressing surprise that the biographer had traveled to Brookhaven, Mississippi to understand the experiences that would shape her life, Rev. Wyatt found herself encouraging Walker-McWilliams to “tell the story”—and she certainly has. Walker-McWilliams masterfully weaves the influences of the Great Migration from Mississippi to segregated Chicago, the vibrant religious culture of the Church of God, Chicago’s meatpacking industry and labor movements, the emergence of the Civil Rights and women’s movements, and her enduring marriage to Rev. Claude Wyatt to create a fascinating portrait of a historical activist icon.

Addie Wyatt brings much-needed clarity to an American public whose opinions on the causes of poverty remain stubbornly divided along racial, political and gender lines. Numerous books document those social movements that take up the fight against poverty as well as the lives of the impoverished, but Walker-McWilliams’ work stands out for the attention it gives to the personal—even domestic—aspects of Wyatt’s life, such as being a full-time mother and the barriers she encountered in pursuing her desires. The author captures that here:

“As much as they hoped their union would pave the way for a better, more stable life, the early years of their marriage were wrought with instability, as were their prospects for upward economic mobility.  Addie Wyatt’s entrance into the workforce opened her eyes to the realities of racial and gender discrimination as structural and institutional barriers not only to employment in meatpacking, but to job promotions and job security once hired.”

Wyatt’s struggles for personal security and social justice are inseparable.

Another virtue of Addie Wyatt is that it takes readers into the massive meatpacking industry of the 20th century where the daily effects of racial and gender discrimination are made plain. As Wyatt became the first African-American president of United Packinghouse Workers of America’s Local 56, the prevailing images of “women’s work” caused women to suffer the effects of automation disproportionately. In some cases, all-female departments were shut down. Playing the role of educator, negotiator and mediator, Wyatt exemplified an understanding of the racial and sexual divisions of labor in the midst of a rapidly changing economy, and worked to save the jobs of both women and men. While Addie Wyatt chronicles the complexities of national labor and civil rights struggles with familiar names such as A. Philip Randolph and Bayard Rustin, its insights into Chicago’s local politics are just as rich.

Wyatt’s major presence in black religious circles is felt in the differences between Rev. J.H. Jackson, the late pastor of Olivet Missionary Baptist Church and Dr. Martin Luther King, Jr. over direct action tactics of the Civil Rights Movement. Their mutual consternation is the stuff of lore, and no matter how the story is told, the takeaway is almost always the same: When the street his church stood on was renamed to honor the recently assassinated King, Jackson changed his church’s address so that it wouldn’t include the fallen civil rights leader’s name.

Such schisms were not limited to iconic male clergy; they ran deep within many congregations. As a member of the Negro American Labor Council (NALC), Wyatt protested outside of Jackson’s church for not giving personal and financial support to the Civil Rights Movement. Her leadership skills were quickly put to use in fighting police brutality, working with SCLC and the Chicago Freedom Movement, providing strategic counsel to Operation Breadbasket, and electing Harold Washington mayor of Chicago.

Addie Wyatt helps challenge our contemporary images of where progressive activists are found. It would be hard to imagine Wyatt’s journey as an activist absent the influence of Langley Avenue Church of God. Yes, the congregation emphasized personal salvation and strict adherence to scripture, and it would be easy to allow narrow religious caricatures to obscure their commitment to social justice. But at Langley Avenue, the sight of women holding powerful positions was the norm rather than the exception.

The Porous Borders Between this World and the Next in “Slipping”

Wyatt was a masterful rhetorician. Moving between secular and sacred spaces with ease, Wyatt’s various speeches, writing and sermons “were biblically rooted but moved back and forth between the perils and promise of men and women in scripture and the perils and promise of contemporary gender, race and labor relations in America.” Walker-McWilliams has written a book that mirrors Wyatt’s public faith in many ways, moving seamlessly between expert exposition about American history and how that history relates directly to Wyatt. The effect is palpable: In reading Addie Wyatt, one need not be a member of the faithful to be moved by her faith.

Walker-McWilliams has also written a book that challenges the fixed understandings of past social movements that inform the struggles of today. A recent report on labor movement leaders, And Still I Rise, which was launched by the Black Worker Initiative, makes a powerful case that the revitalization of the labor movement in America rests in the hands of black women. I think Rev. Addie Wyatt may have believed that it always would.

Marcia Walker-McWilliams holds a doctorate in American history from the University of Chicago. Revered Addie Wyatt: Faith and the Fight for Labor, Gender, and Racial Equality is her first book.

Naming the World in “Insurrection: Rebellion, Civil Rights, and the Paradoxical State of Black Citizenship”