‘The Heavenly Table’ Is Both Timely and Timeless 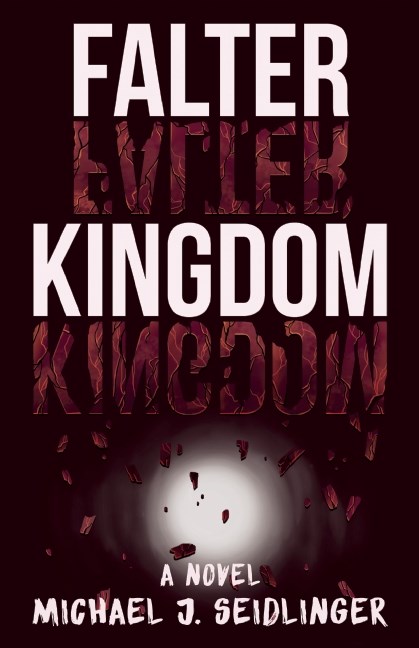 Michael J. Seidlinger is not your typical YA author. Case in point: after unboxing the first copy of his new book Falter Kingdom, he set it on fire and lit a cigar with the flames. That and he writes fiction from midnight to 4 a.m., in between his three other literary jobs (publicity director at Dzanc Books, reviews editor at Electric Lit, and publisher-in-chief at CCM).

Falter Kingdom is the first-ever young adult novel from the Los Angeles-based independent publisher Unnamed Press. Bucking the YA trends of the past decade, Seidlinger’s seventh book does not feature a post-apocalyptic dystopia or a lovable protagonist. Instead, it’s about a lazy, misanthropic teen named Hunter who is obsessed with unboxing videos. And after exploring a mysterious tunnel in the woods on a dare, he’s possessed by a demon. I recently spoke with Seidlinger about how he finds time to write fiction and why he infused a young-adult novel with adult themes.

Adam Morgan: What drew you to the subject of demonic possession?

Michael J. Seidlinger: It’s one of the few horror themes that haven’t bled into something derivative and boring. Okay, I know, I know, give me a moment to let me explain: Yes, there are quite a few demonic possession films and likely way too many books about essentially the same concepts. Yet what still remains fresh, for me at least, about the demonic possession subject is how it takes over a body and mind. Some of the most frightening concepts delve into a loss of control. This is the reason body horror became so compelling and A Nightmare on Elm Street, way back in the day, was frightening as hell: To lose control of your body and/or mind was about as vulnerable as you can get. There’s nothing more frightening than that.

Adam Morgan: Is the tunnel at the center of the plot based on anything from real life? Your own child/young adult-hood?

Michael J. Seidlinger: Nothing direct but, you guessed it right—a lot of it came from childhood experiences. I’m sure you had the same: some sort of seemingly forbidden hangout where it seemed like whatever you and your friends did, there wouldn’t be anyone to interject. The paranormal side to things comes from a time during grade school where I got caught up, alongside some classmates, in the budding “paranormal investigation” trend. We were watching a lot of Ghost Hunters and checking out all kinds of backstories and urban legends about real world “haunted” locations. Without noticing, Falter Kingdom, the tunnel, became an aggregate of the two: both a fabled urban legend and a place where teenage youth flocked to be away from prying eyes.

Adam Morgan: Hunter is, at times, a difficult person to like. Where do you stand on the debate regarding likable vs. sympathetic characters?

Michael J. Seidlinger: Oh yeah, Hunter is at once an asshole and someone that just might end up your best friend. But that’s what I love about the “unlikeable” and/or “unreliable” character: They don’t want or demand the reader’s approval. I’m so tired of seeing the “sympathetic” character as a facsimile of the “hero” character going through an arching conflict only to suffer some kind of loss and then win out in the end. I’m bored, but not against, the likable/sympathetic character. Surely they have their fill, but I just feel like everyone’s trying so hard to make their main character/protagonist the anchor, the so-called “waypoint” for the reader to navigate their narrative, something about the complexities of an imperfect and moreover human character is lost along the way. Hmm. I’m not saying the sculpted and likeable character isn’t “human”; rather, I’m merely saying I’ve personally come to understand humanity as both the likable and unlikable, the endearing and the flawed aspects of a person combined into a work-in-progress dubbed a person. We are all work-in-progresses, people dealing with problems, hurdles, and issues. What is life but not a continual self-discovery process?

Adam Morgan: Since you were writing a YA novel, did you ever struggle with how much “adult” behavior to include? (i.e., sex, drugs, and rock n’ roll).

Michael J. Seidlinger: All the time. It’s perhaps why Falter Kingdom has a lot of cross-over appeal with an older audience. Though I wrote it to be Young Adult, I also wrote it less to fit into the fantasy akin to the genre and more so to the coming-of-age narratives seen in titles like The Spectacular Now, It’s Kind of a Funny Story, and, the oft-mentioned, The Perks of Being a Wallflower. All of those titles resonate well across a wide age group, not just young adults; I’m pretty sure a swarm of adults have dabbled with those sorts of titles. Falter Kingdom might fit into an in-between space then, given that it isn’t strictly the YA fare that fills book shelves in any typical bookstore; it’s about a frustrated “social chameleon” character named Hunter trying to figure out himself as much as the world around him. It’s a narrative full of complication and would-be addictions. There’s a lot of doom sprinkled throughout its chapters.

Adam Morgan: Given your day jobs at CCM, Dzanc, and Electric Lit, how do you find/make time to write fiction?

Michael J. Seidlinger: It gets tough. People ask me all the time how I balance everything. The short answer is: it’s fucking tough. The long answer is: I work Dzanc from 10AM to 5PM, with spillover frequently as late as 10 or 11PM. CCM’s core hours are from 5PM to 9PM, but I will respond to email and deal with “fires” or any pressing matters throughout the day. Social media lately for CCM has been a problem; I’ll likely be looking for help in that realm soon. Thankfully CCM has a trusted group of editors that have kept the quality up and worked with me so well there’s no friction, as little “all-nighter” issues as possible. They are all masters of the editorial craft.

Electric Literature has become kind of my saving grace. It helps cleanse my palette from all the publishing stuff. I work on articles, assign books, discover books, and I am constantly meeting new book critics and authors. It is ever-present and though doesn’t have an outright core-hour section of my day, I am constantly aware and edit reviews and articles as they come in. There’s a reason I have continued to be a part of the publication; Lincoln, Halimah, Dwyer, Lucie, Andy, et al are all amazing lit citizens; moreover, the venue continues to challenge the industry and, if you ask me, that’s what it’s all about.

I write fiction from 11PM to 2-3AM. Sometimes it goes to 4AM. Weekends are amazing for allowing myself time to write, though the various roles continue to spill in, if I let them. Email has no end date; everyone and anyone will send you email on a whim. You email answering one question and they’ll email back under 10 minutes asking five more. I guess it just comes down to managing when to respond versus when the initial email actual arrives.

Orchids, Animals, and the Seduction of Storytelling: An Interview with Susan Orlean

Adam Morgan: One of the first things that stood out to me about the novel is the form. Lots of one-line paragraphs and bolded sentences (the latter of which were removed from the final version of the book). How and why did you settle on that? Were you influenced at all by the style and rhetoric of social media?

Michael J. Seidlinger: Ah, the bolded sentences. At the last minute, we’re talking the absolute final pass, I discovered its purpose had outlived the path of the book to publication. Basically, what used to make sense no longer did. It could be a matter of time, the manuscript sitting and simmering for over a year before publication, but inevitably I chose to drop it.

If you’re still interested in what they were intended to do, the first four to six words of key sentences were bolded to become faux-focal points for the reader’s eye, essentially directing them down the page, much like how a skim-reader doesn’t go left-to-right, reading every line; instead, the skim-reader scans and picks up on the important details while slightly unfocusing their eye as they scroll down the page. The structural device was implemented as a commentary on the tendency to utilize more of a skim rather than a long-form read. In that sense, you could say it was influenced by modern mobile reading habits and social media.

Adam Morgan: Why did you choose Unnamed Press?

Michael J. Seidlinger: Olivia, Chris, and crew are all doing something amazing. In only a few short years, Unnamed Press has rampaged into the indie community with an interesting and undeniable aesthetic. I didn’t so much as choose Unnamed Press; rather, they chose me. I feel like it’s a great fit for the book. We’re not telling the usual narrative and we really don’t want to; surely, that will turn away people but at the same time, exploration with form and narrative is essential for the craft and it’s refreshing to see a press so willing to champion this sort of innovation.

Claiming the Title in “We Can Be Heroes”

The 400-Year Continuum We All Share with Ida B. Wells