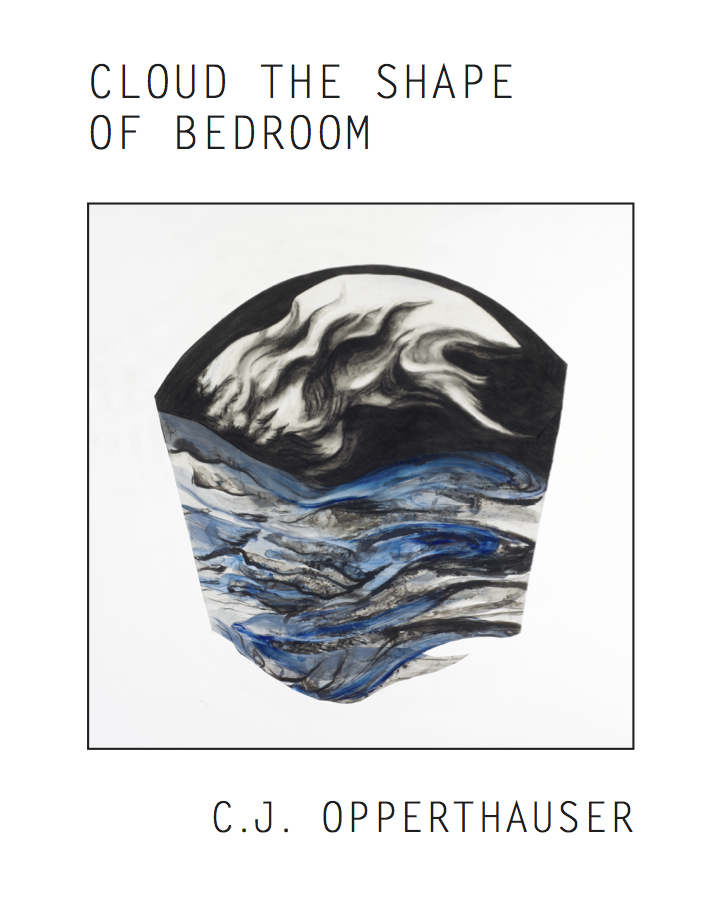 April might be the cruelest month if you’re preoccupied with taxes or weather. But if, like many poets and readers of poetry, you’ve been swept away by National Poetry Month’s myriad readings, events, and special features, you’re likely to look more favorably upon May’s precursor.

That’s certainly the case for Michigan-native C.J. Opperthauser, who co-edits Threadcount, a journal of hybrid prose. This April has included two seminal events for Opperthauser: he just got married, and his debut chapbook Cloud the Shape of Bedroom was just released by Tree Light Books. Cloud the Shape of Bedroom—which has won the praise of Chad Sweeney and Carrie Lorig, among other poets—is a collection of spirited prose poems that grapple with humanity’s relationship with the natural and mechanized world.

Cloud the Shape of Bedroom is your first chapbook. Is it connected to a larger project or is this exclusively where your relationship to this speaker and this world begin and end?

It’s part of a larger project in the sense that there is probably, as far as my mind’s gone, no end to this relationship between world and self. I have realizations about my perception of my surroundings that essentially haunt the way I feel when I walk in the world, and I’ve learned that I can’t shake them. I’m a believer that every encounter with something as large as your own landscape or the very thought of the Big Bang or Whitman’s whole thing about grass should hit you in a different place. Physically hit you in a way that makes you feel it. So I think this relationship to “world” both physical and conceptual will forever grow and explode and implode and change colors. Maybe its brothers and cousins will look and sound a bit different going forward.

The poems in your chapbook are exuberant and unruly. Does that energy spur naturally from the content or was it something you had a more deliberate hand in cultivating? I’m wondering if an aspect of your writing process (music, setting, structure) played a role.

Unruly. Exactly. Their energy was partially derived from the content itself, in that weird way that I guess makes it some version of meta, but more so the energy was there because I was so psyched about that content, and because I was writing these poems for the purpose of performing them. It reflects the energy I wanted to exude when reading these aloud. I also, at the core, wanted to challenge the pacing I’d been reading and hearing and push myself to make rhythms that appealed to my jazz-and-blues ears with specific phrasing and repetition. I’ll say, too, that I was careful about where and when I wrote these poems (usually either in a coffee shop or outdoors, sometimes both, but almost always in the morning) simply because those venues seemed to click best with the level of energy I wanted. Ultimately, the energy was a deliberate goal that required specific writing habitats to produce naturally.

For many poets, making concessions to a manuscript can be painstaking. How did these twenty prose poems come to live under the same roof?

At the end of my graduate thesis (multi-formed poems about Detroit), I found myself wanting to rebel against that commitment and obligation with totally different stuff that was still concerned with place, but more so in an abstract and personal sense. At first these rebel poems were honestly not very good and were spinning tires in mud. Once they caught traction, I found myself not being able to write about much else, and also felt caught up on this speed-driven prose poem form that, at production’s peak, was geared totally toward being performed aloud (and loudly, at that). While I’ll openly admit that I’m not sure I can distinguish the drive that made these poems from either self-made obligation or complete fascination, I’m positive, looking back, that I couldn’t write anything else for at least a couple years. The best of those pieces got a seat at the table.

What are the key inspirations behind your chapbook?

Well, more largely, these poems come from some cloud of perception I’m stuck with—that weird feeling that you’re not fully where you are. There’s the big scene in Hemingway’s “The Big Two-Hearted River” where Nick comes to the river and has to convince himself, or maybe just reiterate to himself, that the river is indeed there. I’ve got that line tattooed on my arm as a reminder that the world is real, and these poems are a way for me to get my hands down deeper into that thought.

On a different level, though, the biggest inspirations here in terms of how to write these thoughts come from some writers like Dana Ward, Juliana Spahr, Lyn Hejinian, Carrie Lorig, Matt Hart, and of course old papa Walt Whitman. Mostly from those folks I borrowed movements and patterns, maybe even some images that I couldn’t shake. Like I said before, a lot of the phrasing and rhythms I use are super blues-influenced; I play a lot of blues guitar, so that stays stuck in my head and fingers whether I like it or not.

What about place? Were there any particular regions or landscapes that fought their way into the chapbook?

I wrote about half of these in Cincinnati and the other half in Providence, but I think in sum I was imagining myself in some conglomerate world with every imaginable physical feature of landscape. While living in Cincinnati I routinely drove through Kentucky and Tennessee to spend time with my then-girlfriend-now-wife, which put me along the crest of the Appalachian mountains and Cumberland Gap enough times for that landscape to be lodged at the base of my brain someplace, and of course New England is a stark contrast from all of that. So it’s an insane soup of place, I guess, but definitely there is a little Cincy and a little Providence in it.

I’m captivated by how these poems exhibit both brevity and long-windedness. Did allowing space for these contrasting approaches to co-exist make the poems more challenging to write?

Well, I found myself naturally landing on about the same word count per poem, so there ended up being a rough battle against that, just for the sake of variety and challenge. Often the shortest pieces in the chapbook began as really long ones, and vice versa. I think brevity and long-windedness were both tugging but yanked the rope in two.

If you had to equate this collection of poems with a style of beer, what style would it be?

Oh man, that is tough. You know those barrel-aged bourbon beers that are potent, delicious, and can’t seem to quite decide what they are? That. Every time I drink one of those I think about how confusing it is to be real.