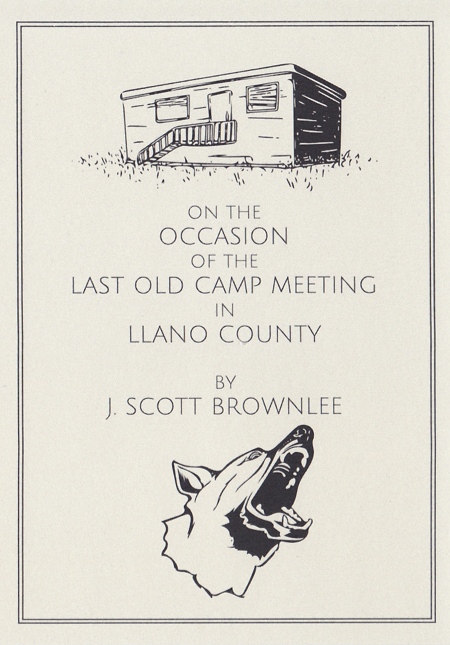 Whether your relationship with poetry ends at Robert Frost and the occasional Hallmark haiku or you’re awash with narrow spines and letterpress broadsides of verse, you’ve probably shared the perception, at one moment or another, that poetry is stuffy and academic.

Enter J. Scott Brownlee—a poet from Llano, Texas and a founding member of The Localists, a literary collective that emphasizes place-based writing of personal witness, cultural memory, and the aesthetically marginalized working class—who disrupts the notion that poetry is for the elites.

Brownlee did move to New York City to pursue poetry—he earned his MFA from NYU—but the scope of his work is not skyscrapers or trendy eateries; it’s the plight of rural Americans, oft overlooked. He’s published three award-winning chapbooks: Highway or Belief, (Button Poetry, 2014), Ascension (Texas Review Press, 2015), and, most recently, On the Occasion of the Last Old Camp Meeting in Llano County (Tree Light Books, 2016). His first full-length collection, Requiem for Used Ignition Cap, was a finalist for the National Poetry Series and selected by C. Dale Young as the winner of the 2015 Orison Poetry Prize.

I recently spoke with Brownlee about On the Occasion of the Last Meeting in Llano County, the role of music in his poetry, and championing marginalized voices.

In your newest chapbook, On the Occasion of the Last Old Camp Meeting in Llano County, you return to Llano, Texas to explore both the people and the landscape of that region. The collection is comprised of many voices—wildflowers, pasture fires, evangelicals, and unbelievers, to name a few. Why take such a wide-ranging approach instead of leaning auto-biographical or even following just one speaker’s trajectory?

I don’t think I’m old enough or wise enough to write a book about Llano’s people and landscape that is from just my perspective. Enough didn’t happen to me to generate a book that other folks would want to read. Additionally, in order to write about working class lives and landscapes effectively, trying to understand the whole that makes up the parts is critical.

Can you write about a singular working class experience? Absolutely. Is it necessary to set up a collective framework of lives and voices around that individual experience before trying to capture it? I think so. My second full-length collection, A Little Bit of Hardly Anything, is driven by the voice of a single working class persona, Aron Anderson, whom you meet briefly in this chapbook. But I don’t think I could have discovered Aron’s individual voice without listening to and trying to represent the town’s collective voice first.

Of all the voices you assume in On the Occasion of the Last Old Camp Meeting in Llano County, which were among the most challenging? Would you say you’re most comfortable with or most drawn to persona poems?

It took multiple drafts and several years of revisiting the wildflower poems before I was able to get them to click individually and together. They’re the oldest poems in the chapbook, but also the most recently edited. Part of the difficulty in creating them was making sure each voice was distinct but also felt part of a chorus / choir. “Wine Cups” was always the strongest of the bunch, the most insistent. Determining the concerns and stories of the other flowers was an exciting puzzle. I did quite a bit of erasing and rethinking along the way.

Finding the right tonal register and music may be the toughest thing for a young poet to discover. There are so many aesthetic influences we’re surrounded by and encouraged to mimic—so much song that can keep us from following the rhythms that come most naturally to us. Using voices other than my own wasn’t something I consciously did initially, but once I dialed into the possibilities of persona poetry, I got hooked and stay hooked.

That dialing in happened, I think, because representing Llano’s citizens and landscape necessitated using voices other than my own. I’m definitely drawn to persona poems more than other forms, though I’d also argue that all poems are persona poems, since writing itself creates an inevitable separation between a speaker and that speaker’s experience.

How do you feel about writing to music or using music as a tool for focus?

I’m a big fan of that approach and listen to music all the time while writing poems. It’s especially helpful to have a song on loop that has a mood matching the poem I’m drafting. Some of my favorite artists / bands to write to are Jason Isbell, Cory Branan, The National, Hammock, and The Album Leaf.

Poetry Magazine has occasionally released soundtracks in the form of Spotify playlists to accompany their issues. Writers have begun to do the same for book releases. Can you give us a taste of the soundtrack for On the Occasion of the Last Old Camp Meeting in Llano County?

Sure—here’s a stab at that (in no particular order):

Aside from music and Llano County itself, what were your influences or inspirations for the chapbook?

The people I grew up with were the biggest influence outside of the landscape itself. I wanted to tell some of their stories and in doing so draw more attention to working class life’s relevance in discussions of what it means to be a marginalized citizen. They spend their entire lives on the outskirts of “high culture” and tend to get systematically ignored by the media, which writes them off as uncouth, cultureless people not to be associated with. Some stereotypes about rural people turn out to be true in certain instances, but there is much more to them than meets the eye.

My teachers have been a huge inspiration and influence on this chapbook as well—especially Dorianne Laux and Joseph Millar, who I think of as my “poetry parents,” and Yusef Komunyakaa and Sharon Olds, who supported my writing at NYU and gave it their close attention and belief when no other MFA programs I applied to did (I was 0 for 8 except for a wait-list the year I applied). The two poets whose poetry most influences this chapbook are Larry Levis and Mike McGriff. Their work provides a place-based roadmap I try (and fail, but nevertheless keep trying) to follow.

With the spirit of your chapbook in mind—giving a voice to those who stray from the spotlight—can you recommend a few poets flying under the radar whose work deserves more attention?

Definitely—the whole author list at Tree Light Books, the publisher of this chapbook, is loaded with fantastic writers! Right now my favorite poets everyone will know about soon are Aziza Barnes, who has a stunning first book, i be, but i ain’t, due out from YesYes Books in the spring. Her chapbook me aunt jemima and the nailgun. is probably my favorite written in the past five years. She’s better known in the performance poetry space, but that will certainly change when her full-length drops.

Nicole Sealey is I think the strongest poet of my generation and has a chapbook out called The Animal After Whom Other Animals Are Named. I know, right? With a title like that, you know her poems have to be good. Another poet whose work closely aligns with my own and so I root for is Edgar Kunz, who doesn’t have a chapbook yet but will soon. The other poet whose first book I can’t wait to read is Monica Sok. Her chapbook to be released this spring, Year Zero, deals with issues surrounding personal and cultural identity juxtaposed with the Cambodian genocide carried out by the Khmer Rouge. She is the most courageous poet I know.