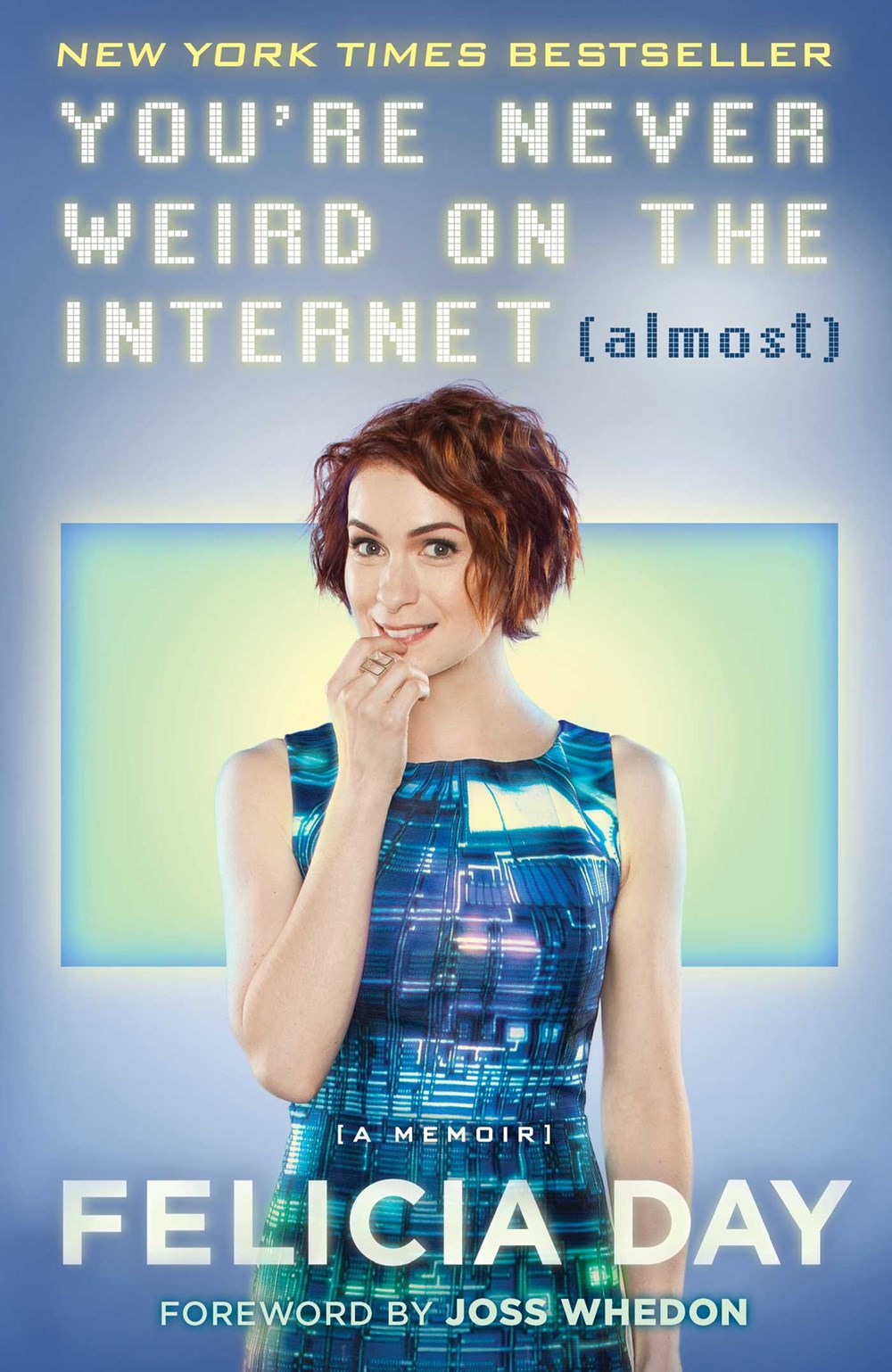 Perhaps it’s natural to equate creative success with happiness. Surely all those beautiful, clever, funny people we see on TV (and YouTube) are brimming with self-confidence and a sense of purpose, right? The reality, of course, is that our favorite actors, writers, and artists struggle with the same human conditions that we do, with the added pressure of being in the spotlight.

Felicia Day—who wrote, directed, and starred in her own web series The Guild before appearing in Supernatural, Eureka, Dollhouse, Dr. Horrible’s Sing-Along Blog, and founding Geek & Sundry—is no stranger to success, nor to the anxiety and depression that may or may not be more common among creative people than the rest of the population.

Felicia’s memoir, You’re Never Weird on the Internet (Almost), came out in paperback yesterday. To celebrate, she’s coming to Chicago this weekend for a couple events (1 and 2). I spoke with Felicia about writing her book, dealing with online harassment and #GamerGate trolls, and her advice for writers, artists, and other creative types who suffer from depression and anxiety.

Adam Morgan: What chapter of the book was the hardest to write?

Felicia Day: They were all hard in their own ways, but I guess the hardest was the chapter on my depression and anxiety. It was quite personal. I had never talked about publicly about how close I came to completely breaking down when I was stressed and overworked and not following my own gut. I thought maybe the chapter had gotten too heavy, but in the end it was the most gratifying part to write because so many people have said that it was meaningful.

Adam Morgan: A lot of creative people suffer from anxiety and depression, so it’s encouraging to see it addressed as a near-universal part of the human condition instead of something to be ashamed of.

Felicia Day: Yeah, we’re all humans, we’re all flawed. We’re creative people because of different things in our background that make us able to express ourselves, and ultimately because we’re vulnerable. The more vulnerable you are, the more you’re going to feel the effects of setback and discouragement even more other people. What new media and the internet does well is allow the person behind the creative things you like to be a person. It lets you experience the ups and downs with them and realize that there’s always more going on behind the scenes.

Adam Morgan: Along those lines, what advice would you have for other writers, artists, creators who struggle with anxiety and depression?

Felicia Day: I would encourage people to understand our feelings drive our creativity. Sometimes what we’re feeling isn’t the truth, but we can objectify those emotions and realize that they’re temporary, not a state of being. If those negative feelings stick around too long, you need to be proactive about getting through them, whether it’s through therapy, medication, or even just getting out of your routine and expressing your creativity in different ways than you’re used to.

Even after my book tour, I experienced a downturn in the way I felt about myself and what’s next for me. And the way I got through that was to really buckle down and learn from my previous experience: to get help immediately, identify the things that were making me unhappy, and do something different. It might not be the perfect thing to do, but at least I was taking control of my life and not letting emotions rule it.

Adam Morgan: What do you hope the next generation of content creators and creative people will learn from your book and your experience?

Felicia Day: What I would love for people to take away is the permission to create something, and that sometimes, the act of creating is worth more than people accepting what you create. There’s only one person on earth who’s going to express themselves like you do. You are a unique person and sometimes it’s just necessary for you to get your voice out there. Don’t be ruled by how it’s received or how successful it is. Don’t judge your self-worth based on what other people think. Your focus should be on the act of creation itself. You can only control the thing you’re creating and you get better at it over time.

Also, I hope people come away from the book looking at the internet as a place to be creative, to share their voices with other people who can encourage you to get through those ups and downs through the internet can do.

Adam Morgan: The chapter on your experience with #GamerGate was shocking, and I admire you for taking a stand in the face of so much hate. Why won’t Twitter, or even the justice system, take the same kind of stand to reduce online harassment?

Felicia Day: With online bullying, hate speech, harassment, and direct threats, I think they underestimate the fact that our virtual life is just as important as our real life. Virtual words are as hurtful as real-life words. We live a lot of our lives in this virtual world, and we’re just as vulnerable there as we are in the real world. But hateful people feel more free online because they can hide behind anonymity.

I think it’s incumbent on the platforms that make money off our expressions to give us the tools to protect ourselves. It’s the responsibility of the platform. A mall or a restaurant wouldn’t allow people to yell and harass others, because they’re responsible for the environment they provide. Twitter and Facebook are at least responsible to empower users to protect themselves, both emotionally and in some cases physically. But I don’t see that happening fast enough, particularly around gaming now, and that’s sad.

Adam Morgan: I know you’re a big fan of science fiction and fantasy novels, so now that you’ve written a memoir, have you considered writing fiction?

Felicia Day: I would love to write a novel. Right now, I’m actually taking this year off to focus on writing for TV and digital, and really getting back into that part of my world because really that’s what I love doing. But I can definitely see myself in the near-future, training for fiction, especially young adult fiction. On my book tour, I met all these girls who are 14-20 years old, and parents who said things like “I’d like my daughter to be herself without hiding the things she loves because of peer pressure.”

That experience really made me feel like young women are a wonderful audience to talk to, to show girls that they can be different, that they don’t have to conform to what everyone says in order to be popular or mainstream.

Adam Morgan: What else can we look forward to from you in the future or from Geek & Sundry?

Felicia Day: I’m joining the new Mystery Science Theater 3000, writing on several episodes as well as acting in it. At Geek & Sundry we have International Tabletop Day coming up on April 30, one of our biggest events of the year, where thousands of events around the world celebrate tabletop gaming. And we have a whole slate of new shows coming out later this year, so I’ve been working really hard behind the camera and in front of it, to  keep making what I like. Hopefully everyone else keeps liking it too!

Note for our Chicago readers: Felicia Day will be in Chicago this weekend for a couple of readings and signings. Saturday, 4/23 at Anderson’s Bookshop in Naperville, and Sunday 4/24 at Ebenezer Lutheran Church in Andersonville with Women & Children First.