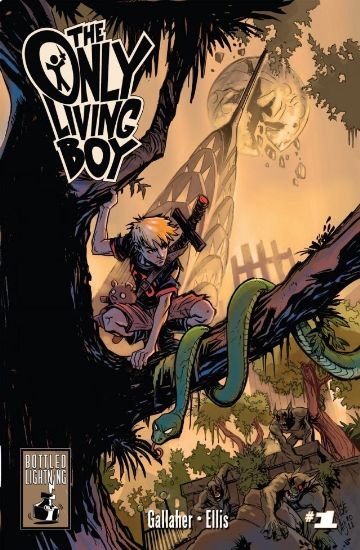 12-year-old boys have enough problems without waking up one morning to find themselves the last human being on Earth. Especially when the world has (literally) gone to pieces. The Only Living Boy—about a New York City tween who teams up with an insect princess and a mermaid warrior in a fragmented, “patchwork” version of Earth—is a wildly inventive, young-adult graphic novel from David Gallaher and Steve Ellis, last seen as co-creators of DC Comics’ werewolf/Western mashup High Moon.

Thanks to a successful Kickstarter campaign, the first hardcover volume of The Only Living Boy debuted on March 8, with the second and third books due later this year.

This weekend, David Gallaher and Steve Ellis will be in Chicago at the three-day pop culture convention C2E2 (Chicago Comic & Entertainment Expo)—including a signing from 4-5 p.m. today at IPG Booth #640—along with hundreds of other writers, artists, and actors, as well as tens of thousands of fans. The Chicago Review of Books recently spoke with them about writing The Only Living Boy, their influences, and their creative process.

Did you know one another before you began collaborating? How did you two start working together?

Gallaher: Steve and I met a couple of years before we started working on High Moon. I was a fan of Steve’s work on The Silencers and Crimson Dynamo. Before that, my friend Jay Faerber had introduced me to his work. I always found Steve’s stuff to be incredibly visceral and alive.

Ellis: At New York Comic Con, I guess it was in 2007, David came up to my booth and we started talking. We had both done some work for Moonstone Books and the White Wolf role-playing games. As we got to talking, David mentioned some story ideas behind High Moon and it felt like something I wanted to be a part of.

Gallaher: Almost immediately after the show, Steve has some brilliant concept artwork for High Moon. And—oddly enough—he was moving from Syracuse to my neighborhood in Brooklyn, literally two blocks away. The proximity really helped set the stage for the working relationship we’ve developed. We started working on High Moon for DC’s Zuda imprint and we’ve been collaborating together ever since.

Can you describe the way you collaborate? Does David write the story first and then Steve illustrates, or is the process more complicated and collaborative?

Ellis: It varies from project to project. David will often come up with a high concept, or sometimes I will, and it’ll key into our shared sensibilities. We’ll talk it out and brainstorm different takes and approaches until we get something we’re happy with.

Gallaher: I’ll take the notes from those ideas and put them into some sort of concrete plot structure. Fleshing out backstories, building up worlds, and do some light scripting and panel layouts.

Ellis: From there, we review everything and break it down, with pencil layouts, usually over Skype or on the phone. It’s not a traditional artist-writer relationship. There’s a lot of back and forth every step of the way. It’s not complicated, but it’s highly collaborative.

Ellis: I bristle against writers and artist divisions, I mean, yes—I draw. And, yes—David writes, but there’s more to it than that. We’re constantly challenging what each other does, in a good way.

So tell me a little about Bottled Lightning, your storytelling studio. How has having this imagination engine changed the way you create and work?

Ellis: It has changed how I work, certainly. And making our studio a business changes our approach to it. Frequently, creative projects get put off to the side in favor of freelance work. When I’m working on Bottled Lighting projects, I’m treating it like work, because it is work. It’s just as valid and as valuable as anything else I might do. On the creative end of things, I think brainstorming with somebody else is a great way to challenge your preconceptions and see something through somebody else’s eyes. It helps push your imagination.

Gallaher: Steve is the first person I’ll go to with a story idea. Our creative conversations can stretch over years! It’s a good feeling to have a creative relationship that has that level of energy and enthusiasm.

Who and/or what are your biggest influences on your work in general, and specifically on The Only Living Boy?

Gallaher: When I was 17, I’d have never thought a decade of playing role-playing games would have had the level of impact it did on my comics career. Dungeons & Dragons, Rifts, Nightbane, Cyberpunk, and Vampire: The Masquerade—they all taught me the importance of world-building and story structure. Those skills have been vital making The Only Living Boy what it is.

Ellis: There’s a touch of Maurice Sendak’s Where the Wild Things Are in The Only
Living Boy. That’s certainly an influence. Old horror comics, animation, oh … and French graphic novels—like Moebius’ work—which has a tremendous scale and scope to it—all played a part in series. If I were going by names… I’d say Will Eisner and Jack Kirby. The Alexes: Raymond and Toth. Jhonen Vasquez. Evan Dorkin. Walt Simonson. Michael Dante DiMartino and Bryan Konietzko — the creative forces behind Airbender.

Gallaher: I often describe the series as a cross between The Jungle Book and The
Island of Doctor Moreau. So, classical literature and old pulps certainly play a huge role in what we’re doing. We saw this as an opportunity to create the kind of story that we wanted to read when we were younger. I often describe it as the Frosted Mini-Wheats of adventure stories. The Only Living Boy has monsters, dragons, and mad scientists to satisfy the kid in us, but it’s also got this savory, textured backstory that appeals to the adult in us. It’s a coming-of-age story disguised as an adventure story.

The Only Living Boy is a pretty wicked and original story. Where did the idea for it generate?

Gallaher: About a decade ago, I was walking through the set of I Am Legend, thinking about how no vampire would be a match for Will Smith. As a 40-ish year old dude—he’s got a lifetime of experiences to help him overcome the challenges of undead infestations. What I thought would be interesting, from a storytelling perspective, would be to have a young boy, without his memories, trapped in that world. As I was thinking about it, Paul Simon’s “The Only Living Boy in New York” popped up on my iPod.

Ellis: David and I were already working on High Moon, a werewolf western, riddled with supernatural horror. On the visual side of things, I wanted to try for something a little different. I wanted to evoke this sense of movement and animation. I gave the environment a much more open feel. High Moon is heavily-rendered. There’s a slow-burn to how the story rolls out. Erik, The Only Living Boy, isn’t a hard-edged character, so I wanted to keep things light. Over-rendering the book would have slowed the story down and robbed the sense of movement and adventure. That’s sorta how the visual look developed.

What projects are you working on next?

Gallaher: Well, this year—The Only Living Boy volumes two and three debut. In the Summer and Fall, respectively. We’re also working on some more High Moon—it’ll be a real hoot to return to those characters. And we’re always incubating something new.

Ellis: Oh—and we’re on a national book tour promoting The Only Living Boy. David and I will be visiting bookstores, libraries, comic shops, coffee shops and more conducting workshops on how to create comics. I’m really looking forward to that.