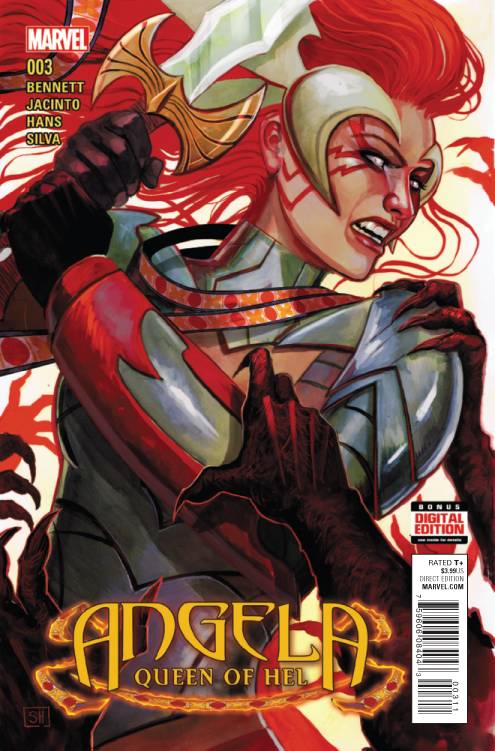 The most compelling, most beautiful, most bad-ass comic book series of 2016 doesn’t feature Iron Man or Batman or any of the infinite versions of Spider-man. Angela: Queen of Hel is the story of Thor’s long-lost sister, on a Dantean quest to rescue her lover Sera from the depths of Hell (or, in Marvel’s reappropriation of Norse mythology, Hel).

The writer, Marguerite Bennett, is the same 28-year-old Sarah Lawrence grad from Virginia who wrote and introduced Marvel’s first all-female Avengers team last summer with G. Willow Wilson, A-Force. One of the most prolific writers in comics today, Bennett freelances for Marvel, DC (Bombshells), and Dynamite (Red Sonja), all at the same time.

Angela presents a unique narrative challenge. The character was retconned into the Marvel universe back in 2013, after a decade-long legal battle between Neil Gaiman and Todd MacFarlane, who co-created her at Image Comics back in the 1990s. Bennett’s take on Angela—an Asgardian warrior and bounty hunter raised by angels—is pure pulpy fun, particularly in tandem with her lover Sera, a wisecracking angel who often breaks the fourth wall. The art, from Stephanie Hans and Kim Jacinto, splashes across the page like fresh blood in an absorbing mix of impressionistic strokes and careful detail.

This weekend, Marguerite Bennett will be in Chicago, speaking on the “Women of Marvel” panel and signing autographs at the three-day pop culture convention, C2E2 (Chicago Comic & Entertainment Expo), along with hundreds of other writers, artists, and actors, as well as tens of thousands of fans. The Chicago Review of Books recently spoke with Bennett about writing A-Force and Angela, freelancing for multiple publishers, and her future dream project. 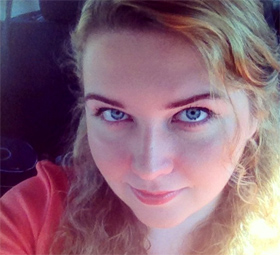 What were some of your goals and hopes when you and Willow introduced Marvel’s first all-female Avengers team? Did you expect backlash like the infamous New Yorker piece?

I wanted to tell an exciting, emotional story about a world where the primary superhero team was comprised of women, without interrogation. No “a plague wiped all the men out!” or “all the men are off at war!” or some other contrivance. Simply, they are here, and they are good at what they do. I ignored complaints against the concept of the primary team being primarily female; those complaints were few, tedious, and uninteresting.

What backlash we expected was drowned beneath the enthusiasm of readers’ responses—from longtime readers who loved the characters to new readers just getting in, and parents looking for a book to introduce future readers to the rich and wonderful heroines of the Marvel universe. No book is going to be for everyone, though, and Willow did an unequivocally excellent, thoughtful, and compassionate thing in responding to Lepore’s opinions.

When writing Angela: Queen of Hel, did you do any research into Norse mythology? Or into World War II for Bombshells? What was your research process like?

Yes, I’m afraid research is an addiction. I am fortunate enough to have had all my parents (stepparents, too) in academia, largely in history, which led to a great fascination with other time periods (which led, in turn, to a great deal of my make-believe as a kid focusing on history instead of fantasy). I tend to go down the rabbit hole of research, and sometimes it becomes another form of procrastination. This is doubled when you’re dealing with characters who in some cases have 75 years of continuity to sift through, to ensure you’re not contradicting extant information.

For the real-world details, I try to temper what I learn—every so many pages or minutes of documentary, I write down three ideas that could be generated from the information I’ve already learned, so I don’t go too far out to sea and flounder under “But there’s still so much I don’t know!” If you’re going to be any kind of artist working through other time periods and cultures, you’re never going to know everything. You need to know how to be respectful and competent, but after you’ve put in the work to assure that you have achieved these features, and checked as far as possible with those native to the place and time, you must resist self-sabotaging with the belief that you are an imposter and delaying your art further under the banner of “more research!!”

Is it odd to work for both Marvel and DC (and elsewhere) at the same time?

Not at all, really. I grew up reading books from both companies, and since I was often excluded from the social community that (at least in my childhood perception of it) surrounded comic book stores, I missed out on the arguments about who was stronger, whether Marvel or DC was better, who was the best Robin, etc. I was there for the characters and the stories. Marvel and DC were all part of one giant universe with parallel worlds, as far as Baby Marguerite was concerned.

Everyone’s experiences will differ, but my freelancer day is pretty straightforward. I work from home, which can be tricky unless you have a strong sense of discipline. I live in Los Angeles, and wake up around 6 a.m. PST, check artwork and notes from the East Coast (in case any projects are under the gun), walk the dog, and answer e-mails for the first part of the day. Around 9 a.m., I start writing for the East Coast companies, and usually keep going until noon, when I run errands and keep house. From 1 until 4 p.m., I write for the West Coast companies. Two hours of e-mail, edits, and notes, plus six hours of writing and editing makes a proper eight-hour workday, but sometimes I have an unusual amount of work on my plate, in which case I write from 7 p.m. until midnight. There are also no weekends in this job, so a light week is around 56 hours, but more often I work closer to 65 or 70 hours.

I feel extraordinarily blessed to have this job, though, and it is absolutely my dream. I love what I do. At 28, I am young by industry standards, so I do take on more work while my priorities are my art and career. I’m still very enthusiastically in the honeymoon phase of my very beloved dream job, haha.

As a writer, are your narrative decisions ever influenced by the artists you’re working with? (i.e., I know Stephanie could knock THIS out of the park.)

Absolutely. The most successful projects, by far, and by far the way I prefer to conduct them, is for the artist to jump on Skype with me before we begin anything—before we even have an outline. All we need is the high concept and main characters at that point. We discuss what we like to write and draw, what we hate to write and draw, what our weakness are, our strengths, our hopes for the project, our concerns. A lot of misconception is that the writer is somehow the employer and the artist the employee. Rather, you are both parents to the child that is your art together. You want it to succeed and must be supportive of it and of each other to achieve that.

Sadly, a vocal minority of the comics/pop culture fanbase is sexist, racist, and entitled. Have you had to deal with that vocal minority on social media or at comic cons, or has your experience been mostly positive?

I’ve dealt with a lot of hate mail, which it is fairly exhausting to discuss—in itself why I often no longer do. Yes, those individuals take special joy in faulting me for my gender and holding me to different standards, but they are squealing, quibbling background noise compared to the utterly dazzling love, passion, dedication, wit, and wisdom of the readers, creators, fans, and community I’ve been privileged to meet over the years of my career. They are weeds in a garden and only that. The good outstrips the bad by an almost unbelievable distance.

Do you have any dream projects you’d like to work on in the future?

I have a very dark, very thrilling psychosexual horror story that will be seeing print about a year from now, with one of the most handsome, talented, and charming artists in the industry. It’s been a passion project, in a very literal sense, for some time now. I very much hope readers will come with me into something very, very different than my previous work.

Note for our Chicago readers: You can see Marguerite Bennett this weekend at C2E2, on the “Women of Marvel” and “Bombshells of DC” panels and in Artists Alley at booth P12.

The Four Seasons of a Superhero’s Life