The 5 Worst Books to Read on Valentine’s Day 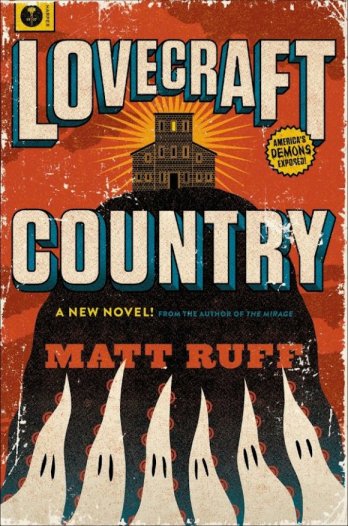 Unlike the conspiratorial Bad Monkeys or his September 11th-inspired Mirage, the eight interrelated vignettes in Lovecraft Country are ten-cent pulp magazines that culminate in an omnibus of a novel. A child’s toy possessed by evil; a many-tentacled, man-eating alien; a Jekyll-and-Hyde elixir that turns a black woman white… these are just few of the concepts Ruff explores. He quickly puts you in a chair of his own design, then compels you to sit at its edge.

The book’s first and largest pulp mag issue, the eponymous “Lovecraft Country,” opens with Atticus, a twenty-two-year-old, black Army veteran, as he migrates from the Jim Crow South back to his hometown of Chicago, searching for his missing father:

As he crossed the water on a bridge named for a dead slave owner, Atticus cocked his arm out the window and bade Jim Crow farewell with a raised middle finger. A white driver coming the other way saw the gesture and shouted something vile, but Atticus just laughed and stepped on the gas, and so passed into the North.

Even in Atticus’s exodus, he experiences only a wafer-thin sense of freedom. He enlists the help of his Uncle George—publisher of The Safe Negro Travel Guide (a call-back to The Negro Motorist Green-Book)—to take on Caleb Braithwhite, a young white man with a slick tongue and physical “immunity,” who attempts to manipulate Atticus and his family to usurp the crown of a secret organization, the Order of the Ancient Dawn.

H.P. Lovecraft’s influence on the book is as prevalent as the title suggests, but Ruff uses Lovecraft’s art against him, mirroring Atticus’s vulgar gesture out the window to the South. Among Lovecraft’s many criticisms were the rampant racism and misogynism in his correspondence, poetry, and fiction. Instead of finger-wagging these beliefs, Ruff skillfully turns Lovecraft’s vision on its ear by presenting racism as a horrific creature. Even the book’s cover flaunts images of ghosts that echo the Klansmen aesthetic.

Ruff confidently displaces Lovecraft’s stereotypes of black people as mere “beasts” who are “semi-human” and “filled with vice” by introducing fully-realized characters (both men and women), rich with intelligence, desire, and charisma.

In another pulp issue, “Hippolyta Disturbs the Universe,” the title character (Uncle George’s wife) is an amateur astronomer named for the Queen of the Amazons. Her ambition is palpable:

A wanderer in darkness, she followed an eccentric orbit, each new disturbance angling her closer to some long-awaited rendezvous. She could only hope that when the moment came, she’d be wise enough to know it, and brave enough to act.

When her moment arrives, she acts. Though her race prohibits her from pursuing science as a profession, her choices lead her to discover another world.

In “Dreams of the Which House,” Letitia, a childhood friend of Atticus, is clever and clairvoyant. Upon purchasing a house in a predominantly white neighborhood (a comment on Chicago’s infamous, discriminatory real-estate practices), Letitia’s “gift of Providence” reveals that her new home is haunted. She appears in the first story as an understated heroine, but then gets her very own ghost tale, rife with bumps in the night and self-operating elevators.

Ruff flexes his comedic chops here, delivering a cavalier Letitia who tames the spirit of Mr. Winthrop from shaking the building’s foundation to playing chess. Using humor as a lens to look at the real-life tragedy of racial tensions, Ruff illustrates how black life may not have been much better in the North.

While the book flirts with a few of Chicago’s historical blemishes, locals may be disappointed to find it never explores them in detail. Despite its deep racial history, the city is mostly relegated to a background player, a missed opportunity to revisit Chicago before the civil rights era.

Redlining and aggressively segregated neighborhoods, for instance, fall outside the scope of the narrative. When Ruff does touch on the harsh division of land in “The Narrow House,” it’s in a different town—no doubt invoking Ann Petry’s, The Narrows, where miscegenation and its consequences are laid bare.

Ruff is sure to retain his cult following and certainly gain a wider audience with the thoughtful, fast-paced Lovecraft Country. Perhaps his greatest victory is giving his characters the space to live and breathe, even when their environment seeks to constrict them. The slippery dialogue and suspense-soaked prose make Lovecraft Country—a challenge to one of the most recognizable legacies in science fiction—worth every dime.