What is art, and maybe more importantly, what isn’t art? It’s a question that only seems to gain relevance, as more and more narratives come to us in the form of franchises, brand tie-ins, and other forms of marketing disguised as story. Thankfully, Alexander Maksik’s latest novel, The Long Corner, is none of those things—but the sticky questions of what is and isn’t art, and what makes any piece of art good remain.

Years after penning an epic profile of a sculptor, Solomon Fields is invited to a cryptic artist’s retreat called The Coded Garden. There, he meets with some of the artists benefiting from the patronage of Sebastian Light, the mysterious owner who hopes Solomon will immortalize him in writing. But the more Solomon untangles the Garden and its residents, the clearer it becomes how little actually lies at the center.

The book begins at a launch party for a new bourbon. Solomon, the writer-turned-copywriter protagonist is there to celebrate the release with Charity, who is allegedly his fiancé despite almost no tenderness shown between the two. He’s jaded after years in the ad world, stringing together meaningless words for catchy slogans. So when the alluring and beautiful Plume comes to invite him to The Coded Garden, he’s certainly receptive to the proposal (and that she’s beautiful certainly doesn’t hurt, either.) As Solomon soon learns, beauty holds special importance for The Coded Garden, as it’s central to how the patron Light defines art and what it should aspire to, and as such shapes the sort of work produced by the artists in residence.

From there, the book gives an extended backstory on Solomon (in one metafictional gag of many, upon their first meeting Light praises Solomon for skipping the backstory and focusing on the work of the sculptor in the piece that endeared Light to him, despite Fields’s insistence to the contrary). We hear of his upbringing, from his Marxist-cum-increasingly-neurotic-Zionist mother, the absent father who apparently pulled off the cliché cigarette run to never return home from, and the bohemian grandmother with whom he’s closest. It’s this grandmother and her own strivings towards art that pushes Solomon to adopt her aspired path, to succeed where she couldn’t. To those ends, she “loans” him her New York apartment (a temporary arrangement, she says), rent free.

So he goes to New York, determined to “make it.” After getting his feet wet in the world of writing, a chance encounter with a sculptor he admires leads to him writing a 20,000-word profile on the reclusive man (note: please put me in touch with such a generous editor, as Maksik paints them), which leads to even more success. Despite the accolades and the rent-free apartment, Solomon is seduced by a smooth-talking ad man into joining his agency, improbably, for reasons that are never quite clear (he mumbles something about the recession to his incredulous grandmother, and I’m on her side.) Having sold out, Solomon finds his soul slowly drained away in the slick world of marketing, this prison he chose. And when his aging grandmother unexpectedly takes her own life, he’s sure he needs an escape.

It’s hard not to read Solomon’s acceptance of the invitation as a yearning for a sense of rebirth or certainty, though he repeatedly insists “no promises” regarding writing a piece about The Coded Garden or its proprietor. And unfortunately for Solomon, not much of Plume’s ambiguity is clarified upon arrival. Instead, he finds a sort of parody of an artist’s colony, a walled-in space replete with studios, communal spaces for eating, working, and more, all with the sort of slick and polished aesthetics of a contemporary dentist’s office. All the artists seem to be oil painters, though sculpture is also held in high regard (the no-technology rule seems to eliminate photographers though there are photo books in the library, and there’s little mention of music).

Solomon starts to settle in, wandering the grounds, and making acquaintances (and more) with some of the artists. He meets Siddhartha, who becomes sort of a confidant to Solomon, as well as the lovable dissident Crystalline, and her hanger-on, Theo, whom Solomon promptly and weirdly psychoanalyzes from his armchair. In spite of the constant refrain decrying critics and specifically New Yorkers, everyone seems obsessed with whether or not Solomon will write about them. For my part, I wasn’t sure that Solomon had the ability to do so, a doubt that thankfully he seemed to share (at least partially).

Coping with Grief and Reconnecting with Identity in “She Is Haunted”

Still, he half-obliges, assimilating and trying to get to the bottom of whatever it is that’s happening here. There’s Sonny’s Bar just past the outskirts of the compound, whose owner is the son of the woman that sold Light the land. Strange events keep happening in the garden, often involving a significant tree and fire—could this be someone’s idea of an art piece? Late in the novel, Solomon discovers the entryway to the garden has a reference to the gates of Auschwitz, perhaps the most severe of several unresolved throw-ins. There’s even some minor sexual healing in a sauna tent, in which Solomon is made a semi-willing participant. But as Crystalline notes, it’s all sort of a usual weird rather than anything truly beyond the pale.

Maksik has set his sights on the vanity of the most self-absorbed corners of the art world, but it doesn’t change the fact that in his assessment there’s nothing behind the curtain, which leaves the book feeling somewhat hollow. Even the Disney-diehard will find fault in Light’s argument that art “must soothe, its message must be kind, it must, as beauty itself does, shelter and secure us.” For my money, there’s no true Scotsman in the novel, as every character is living some sort of fantasy of their own making, even the archetypal sculptor. And the question of whether or not Solomon’s grandmother’s life and death could be seen as a form of art in spite of her lack of creative output is sort of a milquetoast question to ask 50 years after the death of Mishima. Sol for his part is no Ishmael—anyone who claims “There’s nothing shocking left” simply isn’t looking. So where does that leave us with The Long Corner‘s assessment of art or the artist? Perhaps it’s my own cynicism, but it’s hard not to read The Long Corner in that way. Solomon’s grandmother’s contribution was simply her proximity to that world, taking on the lifestyle as a sort of affectation. At the Garden, residents continually tell Solomon about the impossibility of making art without the generosity of Light. Light for his part is a bit darker than he first appears, though even this more substantive side is fairly neutered. Even for Crystalline, lovable rogue that she is, the piece that earns her the most notoriety at the Garden is derivative of a more famous work. Similarly, Solomon made his name off the back of another, only to sell out both his and his grandmother’s dream. Plume accuses him of being a coward in his initial refusal to write about Light or even The Coded Garden, but it’s his eventual capitulation to the patron’s wishes that feel most cowardly to me. Solomon retorts, “Plume, listen to me. I’m not afraid, I’m bored.” 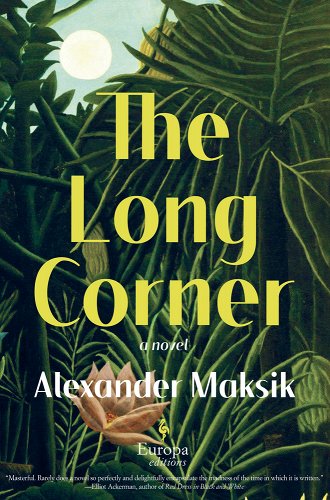 FICTION
The Long Corner
By Alexander Maksik
Europa Editions
Published on May 17, 2022

Ian is a writer based out of Chicago, and one of the Daily Editors at The Chicago Review of Books. His work has appeared in The LA Review of Books, Input Magazine, The Kenyon Review, Chicago Reader, among others. He is working on a novel. Follow him on Twitter as @IanJBattaglia.

A Container for One’s Truth in “The Wall”

Visions of Black Beauty in “Memphis”