What is there to say when you are confronted by a dying loved one in the midst of a pandemic? Most of us have more than likely had to answer that question more frequently, courtesy of COVID-19. Sequoia Nagamatsu’s debut novel, How High We Go In The Dark, tackles this issue, through a different plague with farther-reaching consequences. We might feel stretched to read another tale of a viral scourge, but this mosaic novel tackles a decades-long pandemic from different perspectives and angles.

At the outset, we find ourselves within the Arctic Circle, where this terrible virus has been unlocked from Siberian ice. In one instance, we follow a disenchanted employee at a theme park designed for terminally-ill children and see him change as his cynicism is cracked by a mother and her infected son. In another, a scientist who has recently lost his child finds hope when a pig, one of his test subjects, speaks to him. Elsewhere, a widow and her granddaughter board a spaceship in search of a better future while carrying the broken past with them.

These threads are artfully woven together and unraveled through Nagamatsu’s expert plotting. There are sharp moments of levity, such as the speaking pig, nicknamed “Snortorious P.I.G”, or when a son’s passion for writing is criticized by his mother, “But when will you get paid?”  Yet it is hard to extricate the current moment from this novel, and in some ways, it feels as exhausting as HBO’s Station Eleven, which shares a lot of the same features of this book. Nagamatsu’s unique vision, his Japanese heritage come through with several characters based in Japan, and how the pandemic is approached there rather than the glimpses we see in the United States is stark. The plague doesn’t cause the world to collapse in this novel—at least not physically—society instead adapts for better and worse.

Nagamatsu’s attention to character is incredibly intimate. Each section stars a new individual and consists of an arc much like a short story or novelette, and readers are drawn into their lives immediately, experiencing each memory of their loved ones as they unpack regrets and grief. We can feel the pain of growing up as second-generation immigrants and not living up to parental expectations., or can agonize over the loss of a child, taken too soon. .

“We’ve gotten so used to keeping to ourselves, surviving,”  states a mother, whose child is terminal. Her words could have been taken straight from yesterday’s CNN report. As much as this story wants the reader to dwell in the deep ditches of human pain, suffering, and loss, there is a thread of hope that is strung from the first page to the very last. While it may land differently to various readers, the ultimately optimistic outlook is a shot in the arm for anyone struggling amid COVID-19 or other hardships. Maksim sums this up for her granddaughter who will start her new life on a new planet, but it should encourage us as well: “…you’re young enough to make this new world your life. A start without regrets and mistakes. A start that will be better because you know how much we used to hurt.”

There are a number of viscerally difficult storylines present in the novel, especially around the suffering of children. The “City of Laughter” is a euthanasia amusement park, meant for children who are in the final stages of illness. “When we laugh, we heal the world,”  is a line repeatedly spoken in the park which highlights the simulacrum society builds for itself to hide from harder realities. We are fortunate that COVID-19 did not impact children in the way as this Arctic plague does, but the fallout among the parents and the employees of the park is another matter.

The facade of our neoliberal world order is stripped away in this story. We can’t escape the deaths, the profiteering of the funerary industry, or the remorse that individuals feel when a loved one passes. Capitalism survives in this novel, pulling itself along by exploiting real estate projects, such as the funerary skyscrapers that house many characters’  loved ones.  These gigantic columbariums are just one feature of this new economy of loss, with other businesses arising, hoping to offer products and services to the grieving.

Elegy hotels also become popular and in one chapter, Bryan Yamato is an underpaid part-mortician, part-customer experience coordinator, and grief counselor all rolled into one. Navigating this world skeptically, he tries to avoid the feeling that he is the complete screw-up of his family. Everything changes when his mother dies not from the virus, but from her ongoing battle with cancer. His pessimism transforms into empathy and he begins caring about where his life is going and decides to improve the experiences of visitors to the elegy hotel. He pushes for increased sensitivity and stay durations families can have with their loved ones. There is little that is more life-changing than experiencing the death of a parent, which is painfully clear in his farewell to his already dead mother; “I tell her I’m sorry. I tell her I love her. I wait for her embrace.”

For some readers, a startling blind spot for a narrative that is as thorough as this may be the minimal faith or spiritual dimension of the book. This isn’t to say that there isn’t any mention of “what comes next” or characters that abides by a faith tradition. Yet, considering how exhaustively complex Nagamatsu’s debut is, it might feel  like an oversight, especially to those who may come from that background. I can’t say that this lack detracts from the story, but it does seem to offer readers who are disposed to faith some pause.

Nagamatsu’s work succeeds at resonating on many personal levels. The mosaic nature of the story deepens the empathy as the reader comes into contact with dozens of characters, whose lives may or may not intersect later in various ways. Their struggles are our struggles and our losses are their losses. It engenders the kind of compassion that we desperately need, but it also causes us to reflect and dwell on our own grief, loss and regret. None of that will go away. None of it will weigh any less. None of it will hurt less. Ultimately, this novel encourages us that we can endure if we only attempt to join others in community. I hope we can carry How High We Go In The Dark’s underlying optimism with us into 2022 and beyond. 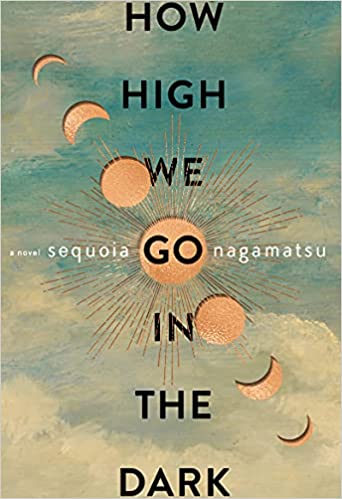 FICTION
How High We Go In The Dark
By Sequoia Nagamatsu
William Morrow & Company
January 18, 2022