The Limits of Language in “Siege of Comedians”

It’s not surprising that the first stories we fall in love with are the fables, fairy tales and myths of childhood; they offer security in the form of simple dualities. The “good” figures in these tales are optimistic and innocent, even naive. Heroines are young and beautiful; fairy godmothers are rosy-cheeked and matronly. By contrast, “evil” is scar-faced and unapologetic; it appears in the form of snarling wolves, warted witches. It’s not until we reach adulthood that we grasp the complexities of this world—how else to explain the quiet, shades-drawn neighbor charged with running a prostitution ring? Today’s headlines spark a yearning for childhood, for simpler days, when packaging could be trusted.

Enter Jen Fawkes, a bard cast for our complicated times. Her first fiction collection, Mannequin and Wife, published in 2020, contains a decade’s worth of her stories, many of which were previously published. Her second collection, Tales the Devil Told Me, would also have been published in 2020, if it weren’t for the impact of COVID-19. What kind of writer is capable of publishing two collections at once? It is easy to think that Fawkes simply burst onto the literary scene fully formed, like Athena from the forehead of Zeus, but the truth is richer. She’s simply a later bloomer just now coming into her own. Since discovering her love of writing more than a decade ago, Fawkes has been working hard, improving her craft, dropping breadcrumbs.

In the Acknowledgements of her newest collection, Fawkes writes that Tales the Devil Told Me was her MFA thesis project. That single-minded purpose explains the manuscript’s cohesiveness. The book contains eleven stories, and although wide-ranging in content, each receives consistently thorough treatment that offers memorable clarity. She lovingly turns familiar tales on their heads, re-examining the roles of the antagonists by placing them in different situations or anachronistic settings, partnering them with fresh foils. Some readers may be tempted to see this approach as irreverent, but such a serious dissecting and reimagining indicates the opposite; only someone with a deep admiration for the originals would bother to do what Fawkes has done here.

When she reimagines these classics, she wrings another layer of meaning from them—the adult layer, the shades of gray, the ability to perceive the humanity within the so-called monster. Such tenderness is evident in “A Moment on the Lips”, in which she reframes the Cyclops Polyphemus not as a monster but as an oafish loser, a lonely bungler who can’t stop himself from eating the shipwrecked crew of Odysseus, the very humans he longs to befriend:

Peter Pan, Hansel and Gretel, and Snow White also get their turn, but with twists in narration; the tales are reframed through the eyes of Captain Hook’s stepson, the child-roasting witch, the enchanted mirror, respectively. In fact, all of Fawkes’ stories are magnifying glasses of sorts, allowing us to see their antagonists more deeply.

Jen Fawkes didn’t begin writing until after age thirty, and in a 2020 interview, listed more than her share of past odd jobs including stints as a cleaning woman, bartender, and tax preparer. Fawkes credits that menagerie of positions for gifting her with a treasure trove of human interactions; a thousand memory fragments which she draws from repeatedly in her writing.

Fawkes’ prose is heady, yet playful. The fun she has writing translates into exuberance on the page. Her voice is chameleon-like, channeling both Arthur Conan Doyle and Italo Calvino in “Dedication” and “Dynamics.” In “Ahab,” Fawkes imagines a letter of confession penned by Moby Dick, and in “Tigers Don’t Apologize,” a fully suburbanized Mowgli struggles with a wife and son who are experiencing an opposite transition of their own, growing wilder and more threatening. It’s the female characters, however, who steal the show. In the pseudo-Shakespearean “The Tragedie of Claudius, Prince of Denmark,” Queen Gertrude plots at the center of the Machiavellian orbits of Hamlet senior, Hamlet junior, Claudius, and Polonius. A girl both defeats and regrets defeating Rumplestiltskin for possession of their child in the book’s opening story. Medusa leads a secret life as the lead singer of a girl band. In perhaps the most engrossing story, “Penny Dreadful,” Fawkes deftly uses a second-person point of view to cast the reader in the role of Mrs. Danvers, personal assistant to Rebecca de Winter of Manderley, a clever riff on du Maurier’s novel:

“The lorry will wind around a tree-lined drive for more than a mile before the dense vegetation recedes and you catch your first glimpse of the house. Do not gasp. Do not cry out. Though you won’t have ever seen Manderley—not even a picture postcard—you’ll recognize from your dreams the decorative half-timbering, the oriel windows, the gabled roof, the abundant chimneys of the house perched precipitously on sea cliffs, and you’ll recall something your mother said before she sank forever into the soft bosom of laudanum: ‘Getting what you wish for, my darling, has its own set of difficulties.’”

In a recent interview with Rachel Swearingen at VIDA, Fawkes said this about  writing female characters:

“When direct action is unavailable, one has two choices: do nothing, or learn to operate indirectly. I can now see the sort of indirection employed by women….as a specific sort of power. A glorious, fascinating, awe-inspiring, terrifying, world-shaking power.” Fawkes herself is tapping into that power. After winning Press 53’s 2020 Award for Short Fiction, she was shortlisted for the 2020 Shirley Jackson Award and also recently named recipient of the 2021 Porter Prize. She is having a glass-slipper moment, but don’t let that fool you. She writes with the wisdom and empathy of someone who’s swept her share of cinders. Perhaps this is the source of the magic Fawkes brings to Tales the Devil Told Me: watching her peel back the masks of the malevolent to find the misunderstood beneath. 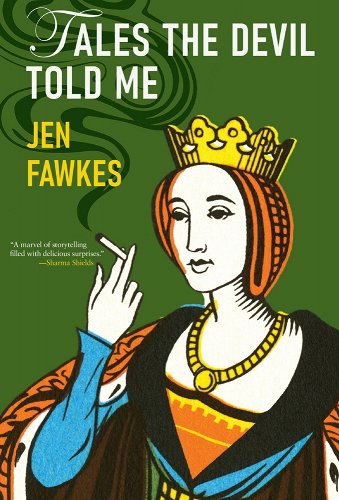