Intersectional Solidarity in “Against White Feminism”

Following the tremendous success of her summer 2020 blockbuster, Mexican Gothic, Mexican-Canadian writer Silvia Moreno-Garcia’s new novel, Velvet Was the Night, arrives just in time for us to enjoy it at the peak of this sultry season. Described by the author in the novel’s afterword as “noir, pulp fiction…based on a real horror story,” this book is intelligent, sexy, and highly entertaining. It also showcases Moreno-Garcia’s evolving mastery of her prose style – more streamlined and confident than in Mexican Gothic – and the enviable sweep of her creative ability to write fascinating characters within and through multiple genres.

The real horror story that launches the novel’s action and brings together its motley group of characters is the Corpus Christi Massacre that took place in Mexico City on June 10, 1971 during the Mexican Dirty War. The injuring and killing of university student protestors demonstrating against the authoritarianism of the long-lived ruling Institutional Revolutionary Party (PRI) was also known as El Halconazo, or “hawk strike,” because of the involvement of the Hawks, “a shock group funded and organized by the Mexican government…and trained by Mexican authorities with support of the CIA in an effort to squelch communism in Mexico and suppress dissent.”

Twenty-one-year-old Elvis is a Hawk, recently recruited by his enigmatic and unpredictable boss El Mago. He comes from extremely poor and desperate circumstances and believes that being a Hawk is his best opportunity to finally leave that world behind. He longs for the status and lifestyle that El Mago enjoys, but struggles with what is required of him. In Moreno-Garcia’s multi-layered rendering of character, Elvis is not a stereotypical goon; although he commits violent acts (including at the Corpus Christi Massacre), he doesn’t derive any pleasure from it. His conflicted and remorseful feelings about hurting people make it almost possible to forgive him for his many wrongdoings, but not entirely. He still throws punches, breaks bones, and does what he deems necessary to curry El Mago’s favor. Elvis’s real passion, however, is old movies and rock ‘n’ roll music, and in his loneliness he seems to yearn for some form of genuine human connection and friendship. El Mago puts Elvis in charge of a special assignment to track down an art student named Leonora Trejo. “The girl,” El Mago says, “has gone missing, along with a camera with important photos. I want her found and the photos too.”

Elvis’s assignment brings him into contact with Maite. In chapters interspersed with Elvis’s story, we learn that Maite is an equally lonely and eccentric individual. She is a thirty-year-old law firm secretary whose life consists of financial struggles, a constantly broken-down car, a judgmental mother, and an abiding obsession with a serial comic book called Secret Romance. Moreno-Garcia’s portrayal of Maite is one of the most intriguing and delightful aspects of the novel: the character elicits from the reader a confusing combination of sympathy and derision. She is plain, self-loathing, and painfully aware of her spinsterhood; very little seems to go right for her. She is also largely ignorant of the reality of Mexico City’s political scene and the government-perpetrated repression and violence. Preferring to keep her head down and avoid trouble, she lives inside a fantasy world, longing for the kind of love she reads about in her comic book romances. She lies to her only work friend, Diana, fabricating stories about romantic adventures, and she’s a compulsive thief who steals items from neighbors in her apartment building when called upon to water plants or feed their pets. “It had taken her a while,” she thinks, “to figure out that what she sought was not the object in question, but the thrill of possessing a secret. As if she had been able to peer into the most intimate recesses of a person’s mind and pulled open a hidden compartment.”

When her beautiful and mysterious neighbor Leonora Trejo asks Maite to feed her cat while she is away, and subsequently never returns, Maite becomes embroiled in an effort to find the missing woman. In so doing, she falls in with a group of Leonora’s friends, many of whom are anti-government activists connected to a radical art collective. Among them are two men – both former lovers of Leonora’s – who are equally, though for different reasons, eager to locate her. One is the dashing Emilio Lomelí, whom Maite imagines as one of her Secret Romance heroes; the other is Rubén, a print shop employee with whom she has a brief and ultimately disappointing affair. As the mystery of Leonora’s disappearance deepens, Maite becomes increasingly excited by the intrigue and adventure of the search: “Today was a day when things would happen, even if nothing ever happened to Maite. She was merely a weathervane, tossed from one point to another by indifferent winds, but now something was happening to her…She was part of a story.”

What Maite doesn’t realize is that, as part of the story, she is also in real danger. Elvis the Hawk has been tracking her every move and becoming increasingly obsessed with her on a personal level, and other governmental operatives and even a ruthless KGB agent are also following her. In the last quarter of the book, Elvis’s and Maite’s worlds collide, characters’ true motivations are revealed, and Maite comes face to face with the violent reality of her situation. What will happen to this improbable heroine?

The historical detail of Velvet Was the Night lends the novel its gravity and intellect, but it is the author’s considerable skill with developing characters and thrilling, fast-paced plotlines that gives it its energy. The perfect summer indulgence, this book leaves the reader keyed up, breathless, and eager for more of what Moreno-Garcia has to offer. 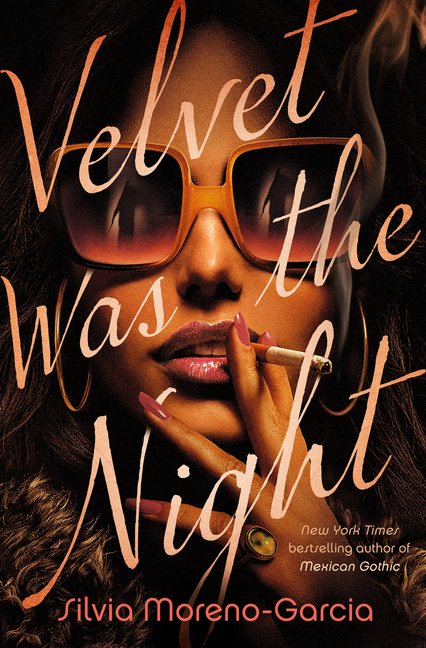