Kink, edited by R.O. Kwon and Garth Greenwell, is a titillating collection of stories about sex, fetish, love, and loneliness from a diverse group of literary authors. Although the collection includes detailed descriptions of sex acts, Kink is primarily an exploration of intimacy, power, and our human need to share an emotional bond.

Communication is a challenge for many characters. For instance, Julie and Philip, the married couple in R.O. Kwon’s  “Safeword,” struggle to express their unconventional desires. At first, they reflect on the banality of their sex life, estimating an average of “121.7 fucks a year,” but neither is adept at advocating their desires for more adventurous acts of masochism. They stumble at first, ending with less than pleasurable pain when Philip strikes Julie’s tailbone. The incident leads them to seek the help of a professional dominatrix, Ava, though even with her help, Philip and Julie enjoy only fleeting moments of understanding. This inability for two people to find their common ground is a recurring theme throughout the collection.

Loneliness is also a common outcome. In Brandon Taylor’s “Oh, Youth,” Grisha canoodles with a mature couple for an entire summer yet finds only alienation.The narrator reflects: “No one had ever been in love with Grisha before. It had never occurred to him that someone might fall in love with him.” Grisha’s story reminds us physical relationships are distinct from emotional ones, and neither can be a substitute for the other, another repeated theme through the collection.

Little is left to the imagination with respect to explicit and diverse sex, and the collection benefits from the variety of voices offering a wide spectrum of narratives. Cis-gendered, hetero-normative sex is a minority in this collection; rather there is an intimate look into an array of matches, which at times stimulate more than just the mind. But this isn’t pornography devoid of plot, narrative tension, or substance. The juxtaposition between the more carnal elements of the stories and the cerebral themes strengthen it as a whole. Some will turn readers on, even as the power dynamics of these relationships might be a turn off. Self-reflection is inevitable.

In Larissa Pham’s, “Trust,” the unnamed man and woman, a couple since meeting at a poetry reading in Brooklyn, escape for a weekend in upstate New York. Sex infuses the narrative, such as when the female protagonist contemplates how “the mound of her pelvis, fat and tender, pulses.” But as with Kwon’s Julie and Philip, physical intimacy doesn’t necessarily translate to good communication. The man disappears for the afternoon leaving the woman worrying he has abandoned her in the cabin. When the man finally returns, he can’t seem to grasp her concerns, leading her to observe: “I’m not trying to make you feel bad,” she says softly. “I just want you to understand how you made me feel.”

Many of the authors offer keen observations. For example, in “Best Friendster Date Ever,” a story about a man having what he assumes will be a one-night stand, Alexander Chee offers this brilliant conclusion: “When I had sex with people I didn’t know, I became someone I only met when I had sex with strangers.” We have all been there. We have all become someone we are not when sex is involved. Or consider Garth Greenwell’s acknowledgement that “Even very beautiful men are eager to be admired.” One of the admirable aspects of this collection is how widely different the voices are: Greenwell’s “Gospodar,” has a dense thickness of prose, and he plays with language, while Alexander Chee’s piece feels more conversational, as if he is speaking this story directly to us.

The collection as a whole benefits from familiarity and intimacy. Many of the stories read like memoir, a testament to the adroit control of authorial voice. The assumption should be these stories are  fiction, but the writers sometimes blur the line. For example,  “The Cure,” by Melissa Febos, features a character who worked for a dominatrix, not unlike the people she writes about in her memoir, Whip Smart. Too  often readers confuse an author with their invention, and in a collection focused on delicate matters of sex and sexuality, the writers are risking even more than usual. It pays off by providing us with rich characters who act and feel real, like people we know, like people we are. They create convincing facsimiles adding to the mirage. And that’s an important point of  this collection: we all have some kind of kink.

Kwon and Greenwell have assembled a tantalizing collection to arouse the mind and body alike. They have recruited an all-star lineup of notable contributors who deliver stories that are fun to read while thoughtful about relationships, power, gender, and expectations. 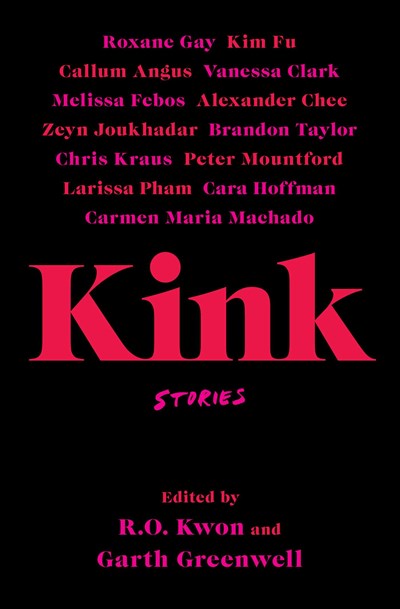