I managed to insult Lou Berney in the course of this interview by fact-checking that he wasn’t old enough to have lived through the John F. Kennedy assassination, the backdrop for his new novel November Road, out October 7 from Harper Collins William Morrow. Berney will perhaps forgive me when I take this public moment to say that November Road is the best novel I’ve read this year and maybe longer, and that reading it has messed up my ability to put my own words down on paper.

Not that he needs my endorsement, because November Road has already earned that precious and rare thing: a starred rave from each of the four major publishing trade review journals. And just this week, it was announced that Lawrence Kasdan has been tapped to direct a film adaptation of the book.

Such acclaim is deserved, because the novel is also a precious and rare kind of story. It introduces us to mid-level, mob-connected street lieutenant Frank Guidry, who realizes he knows too much about how the Kennedy assassination really went down and that he’s next on the assassin’s list. On the run, Guidry careens into Charlotte, a housewife trying to break away from her bad marriage with two young daughters in tow—and uses them as his escape. It’s part crime novel, part family story, part love story, both tender and harsh, and something you probably won’t be able to stop thinking about after you turn the last page.

If you want to hear him read in person, be sure to catch his appearance at Barnes & Noble Mellody Farm in Vernon Hills, IL on Friday, November 2, 2018, 6 p.m.

Writing a book that people want to talk about is nothing new to Berney, whose 2015 The Long and Faraway Gone won the 2016 Edgar, Anthony, Macavity, Barry, ALA, and Oklahoma Book awards. It was also nominated for the Los Angeles Times Book Award. Basically, he’s had to talk a lot more about himself in the last couple of years than he likes to. I bothered Berney by email about the origins and influences of November Road anyway.

Where did the idea for November Road start for you?

The real core of the novel for me was always my mother, who passed away about ten years ago and provided the inspiration for the character of Charlotte. My mother grew up poor and never had a chance to go to college, but she was one of the smartest, most resilient, most intellectually curious people I’ve ever known. A couple of years ago I was going through some old photos from before I was born and something just started stirring. I started thinking, like every writer does, What if? What if, at a certain point, my mother had made a different choice? Would it have been the best choice of her life, or the worst?

Before starting this story, did you have any relationship to the JFK assassination? My own grandparents had a book of photos from LIFE magazine, for instance. I was fascinated in the way only a future crime writer would be.

My family is Catholic, so Kennedy was a big deal for them. My mom always told me stories about how she and her girlfriend called in sick to work and went to see JFK when he came to town.

I also grew up in Oklahoma City, not far from Dallas, so the relative nearness of what happened there on November 22, 1963 always intrigued me. We’d drive down to Dallas every summer to see a baseball game and my dad would drive us through Dealey Plaza, slowing down as we passed the Texas School Book Depository. It gave me chills.

The JFK assassination has so much documentation, so much mythology surrounding it. How did you use what’s out there? What did you choose to ignore?

I knew I didn’t want to write a novel about the Kennedy assassination—there have already been one or two (thousand) of those—so I decided to focus on the characters at the edge of what happened in Dallas. Still, though, I did a ton of reading about the era, about Kennedy, about the mob back then, about the assassination itself. For about a year I asked every single person over the age of 57 where they were when Kennedy was shot (I was fun at parties).

Of course for every ten hours of research I did, I ended up using probably only five seconds of it in the novel. But you don’t know what’s going to be valuable until you stumble upon it.

You have said that you had to throw out much of what appeared in early drafts to rewrite this book. Why did you think that was necessary? What did you have in mind for this story that guided you?

One big reason I started to hate the draft I was working on: it was too static. I’d originally planned to set most of the novel in a small Oklahoma town—a “cool-off” town, where the mob sent guys after a high-profile job. (This is a real thing. My brother-in-law grew up in a town next to one in Kansas.) But the more I wrote about the small town, the more I realized nothing was happening, nothing was moving. At some point I was like, man, if I have to write another scene where the same people chat in the same diner I’m going to shoot myself.

Was there a certain book that you looked to as an example to write November Road?

Once I broke the story and got my characters on the road and on the run, I thought a lot about Cormac McCarthy’s No Country for Old Men. I love that novel—it’s a pretty conventional story, but he does really interesting things with structure and point of view. I didn’t want to copy what he did, but I was definitely inspired by it.

So Charlotte is based on your mother. I have to ask—what parts of Frank and Charlotte are you?

You sound like my sister, Lori! She assumes that everything I write is somehow based on real life, and she’s always prying, trying to figure out which character is her.

I think there’s probably a part of me in every character. With Frank, I think maybe he and I share a certain kind of guardedness, a way of keeping people at arm’s length with humor and glibness (but I don’t keep YOU at arm’s length, Lori! You’re special!).

I see what you mean about glibness. Thanks for showing instead of telling, dude. 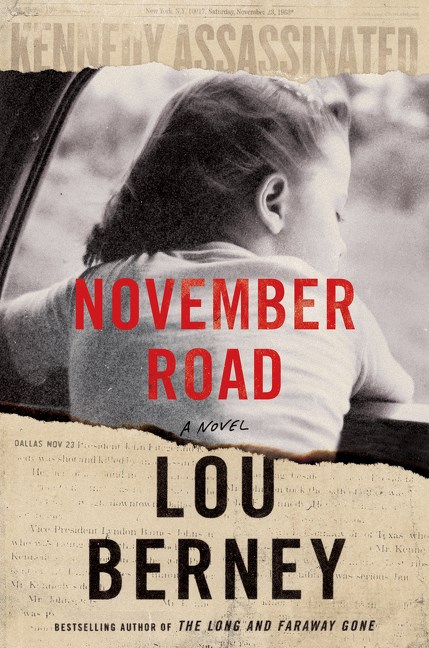 Lou Berney is the author of four novels, November Road, Gutshot Straight, Whiplash River, and multiple prize-winning The Long and Faraway Gone. His short fiction has appeared in  The New Yorker, Ploughshares, the Pushcart Prize anthology, and elsewhere. He lives in Oklahoma City, Oklahoma.