Speculative short fiction is enjoying a particularly good moment in Canada. Last year saw the publication of Torontonian Camilla Grudova’s acclaimed book of short stories, The Doll’s Alphabet (2017), a genre-defying collection of upside-down, otherworldly narrative weirdness. This spring, the fourteen stories that make up Montrealer Paige Cooper’s disorienting first book, Zolitude, combine the sometimes real and recognizable with the frequently fantastic and unfamiliar. The result is some refreshingly smart and offbeat storytelling befitting our curious times.

In many of the stories in Zolitude, the characters find themselves in strange, almost post-apocalyptic environments where a sense of loneliness and disconnect pervades the everyday business of being alive and relating to other people. “Pre-Occupants,” for instance, is the story of a couple just landed on Mars to join two other couples in the early stages of settling the inhospitable planet. Sent by the Foundation to catch and destroy comets that threaten the planet, the unnamed narrator and her husband Paul face years of sacrifice and isolation on this foreign terrain.

“In sixty years,” she says, “we hope to raise the atmospheric pressure to Alps-like levels, which would be enough to suck a sheet of manufactured gases close to the ground. Another twenty years and breathing might be possible, with a respirator. Six years ago I paid twenty-three thousand dollars to cut out my uterus as part of the qualification process. In one hundred years the Foundation will send a breeding pair.”

In contrast to the starkness of the setting is the couple’s love story as they depend on each other for basic human needs and comforts, especially through sex and physical touch. Fittingly, given their bleak situation, the narrator wonders, “Is there such a thing as being adequately close?”

In “Record of Working,” one of the more timely and cautionary tales in the collection, a project funded by thirteen “Domestic Agencies” to build a nuclear fusion reactor (bearing some resemblance to the real-life ITER energy project) is underway in a jungle location in Venezuela. With rampant violence, “wildfires in Austria and breadlines in Canada,” and a climate that is “drunk, liable to mania and then sullenness and then lashing out,” it seems that “civilization has collapsed,” and the need for energy is urgent.

Arthur, the Director General of the project who has promised that energy “delivered in milk bottles every morning,” is missing. Without his vision, there is no reactor. A madman with a god complex, he is obsessed with what he calls the Elemental Woman – “the perfect image in the heart of man” of the nature of a woman. In his record of working, he notes that to continue his work, he must find this “TRUE WOMAN who will flame the TRUE WORKING.” Too late, Arthur’s subordinates realize the project will fail.

Other notable stories in Zolitude include “Thanatos,” named for the Ancient Greek god of death and loosely based on disgraced Theranos CEO, Elizabeth Holmes. The story centers on the brilliant and loveless Charlotte Giang, CEO of Thanatos, recently “barred from owning or operating a laboratory” in which she performed parabiosis on human subjects. While her “valuation went from six billion to zero” overnight, she has more pressing concerns: she is about to go on a blind date set up by her board member Henry Kissinger, and her nine-year-old self has arrived from the past via the time machine she built as a child.

“La Folie” concerns Canadian twin sisters Catie and Audrey, the former imprisoned in Vietnam following an accident, and the latter travelling to bring her home. What initially seems to be a straightforward story of Audrey’s journey to rescue her sister and the reflecting she does along the way on her troubled relationship with a woman named Fawn, soon becomes anything but ordinary when it is revealed that Audrey was sold by her parents as a five-year-old into a legalized twenty-five-year debt bond in order to provide Catie with an elite, expensive education.

The title of the book and its lead story, which comes from the name of a former Soviet district in Riga, Latvia, and obviously plays on the word solitude, establishes the mood of the entire collection. While some of Cooper’s stories – in truth the less affecting ones – include fantasy elements like prehistoric creatures and shapeshifters, overall this incisive collection is about the very human experience of alienation in a foreign environment. Cooper’s rich language, clever narrative structures, and uncommon storylines make Zolitude a fine addition to the speculative genre. 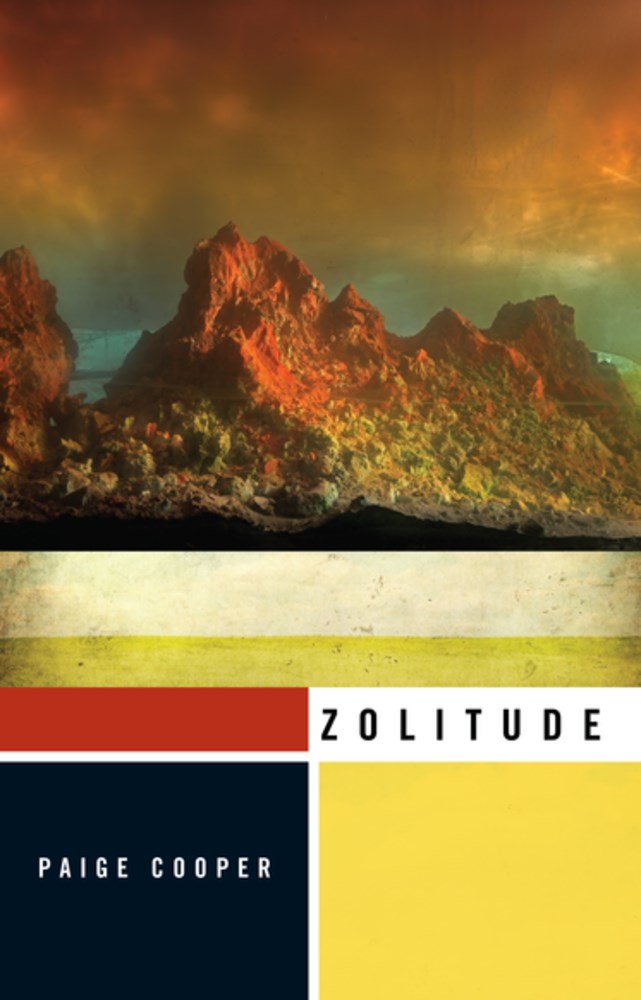 Paige Cooper was born and raised in the Rocky Mountains. Her stories have appeared in The Fiddlehead, West Branch, Michigan Quarterly Review, Gulf Coast Online, Canadian Notes & Queries, The New Quarterly, Minola Review, and Cosmonauts Avenue, and have been anthologized in The Journey Prize Stories and Best Canadian Stories. She lives in Montreal.

An Interview with Lucy Ellmann about “Things Are Against Us”