by Jonathan A. Liebson

Rebekah Frumkin Will Change the Way You See Cleveland

The subtitle of Stuart Kells’ latest work, The Library: A Catalogue of Wonders, presents a riddle of sorts. How to arrange and present the many marvels he’s unearthed without taming his subject matter, à la an encyclopedia? Kells himself seems aware of this challenge.  In an early subchapter, “The Pleasure of Books,” he warns of the “excessive attachment” of bibliophiles and their “overweening” obsessiveness. Kells speaks like a man who’s seen his own shadow. As an academic, a book collector, and a book-trade historian, he straddles two tendencies that are sometimes at cross purposes: a near-insatiable passion for books, and a near-inexhaustible desire to classify them.

Kells’ fervor is visible from the outset.  He recounts his emergence from a dismal life at a social research institute in Melbourne, Australia to one of an avid book collector, thanks to a random find at a college book sale. When Kells stumbles on an obscure 1814 volume of poetry, with no discernible author or publisher, he calls it “a perfect life moment, the kind of discovery that explains why bibliophiles spend so many hours at flea markets, book stalls. . . and garage sales.”

His calling is infectious; readers will be inspired to follow Kells as he tracks down the book’s origins and then hunts for similar volumes in order to build “the nucleus of [his] future library.”

The act of assembling that library provides the through-line to his current work. Along the way, he visits hundreds of libraries of every kind, from national libraries to modest “working men’s” libraries to posh private libraries. Consequently, the author’s fascination with books evolves into a secondary fascination with the places that house them. It turns out libraries are more than staid repositories for slowly aging texts.  Their history, as Kells finds out, holds intriguing stories “of every possible human drama,” touching upon a full range of faults and failings: “anxiety, avarice, envy, fastidiousness, obsession, lust, pride, pretension, narcissism and agoraphobia.”

With a claim so invigorating, Kells sets a high bar for his work and high expectations in his reader. To his credit, the book delivers on this promise in a number of places, not only surprising its readers but instilling that sense of “wonder” promised by its title.  Elsewhere, however, the chapters do start to take on something of a catalogue’s dry accounting.  A high turnover of facts, trivia, and brick-and-mortar details end up deflating some of the book’s allure, however informative those details may be.

Kells’ tour through history predates our common conception of libraries. He examines the ancient Arrernte tribes of Australia and their “dreaming tracks”—small, oblong stones carved with patterns of concentric circles, dots, arches, and lines—which some argue are among mankind’s earliest “oral” libraries. Kells explains how the study of these “totems” led to controversy, as well-intentioned Western scholars were criticized for their misunderstanding and even romanticizing of the Aboriginal’s traditions and histories. Here, Kells seems to try and have it both ways. He pays respect to the “beautiful word-pictures” of the Arrernte, such as one dreaming track that represents the “moment in twilight when the tufts of grass can no longer be distinguished.” But, at the same time, he doesn’t withhold criticism of those scholars who “failed in their duty as curators.”

Other nontraditional libraries of the ancient world include the “tablet rooms” of Mesopotamia, which date as far back as 3100 B.C. Some of these rooms contained thousands of clay tablets comprising as many as fifteen ancient languages. Kells identifies Aristotle’s Lyceum (ca. 335 B.C.) in Athens as an early precursor to the more contemporary library. Not simply a storehouse of readings, the Lyceum was a public forum in which these texts were shared and discussed. Kells calls this the site of “two important beginnings: the inception of Western scholarship, and the creation of…spaces for reading, writing and conversing.”

One of the most fabled libraries in history is the Great Library of Alexandria, established by Alexander the Great (ca. 300 B.C.).  With its hundreds of thousands of Greek and Latin scrolls, the library holds an almost mythical status.  Not only did it make Alexandria the center of “spectacular achievements in medicine, astronomy and geometry,” but its mysterious destruction remains widely debated to this day, a phenomenon lost to history like the Hanging Gardens of Babylon.

Another key transformation of the library followed the evolution of bookmaking.  Papyrus scrolls (hard to label and keep track of) gave way to the codex—i.e., a “hinged” book made from rectangular-cut parchment. Just as the codex could store more information in less space, so too could the places where codices were kept. Kells seizes on this fact in what becomes a prolonged journey through the Middle Ages. He serves up sometimes interesting, sometimes tedious facts about everything from bookbinding and types of animal skins to illuminated manuscripts, pictorial frontispieces, and medieval scribes.

One note of particular importance is how, in the late Middle Ages, the ever-increasing number of codices led to the end of storing books in chests or on lecterns. Instead, codices were placed upright, and alongside each other, on what we now know of as bookshelves. This change would precipitate a host of other questions and issues, such as whether to shelve books spine-inward or spine-outward, how best to arrange bookcases, and how to combat what Kells amusingly calls the “thermodynamic” problem of “shelf-lag.”  (One modern librarian, he points out, has deduced the optimal shelf length to be one meter.)

As The Library speeds through the centuries and catches up to our contemporary era, a snapshot quality begins to take over. Certain morsels will delight and educate—for example, the use of bats in Portuguese libraries to control bookworms and other pests. Others may prove interesting only to the most diehard of library enthusiasts, such as the science of configuring windows to manage light most effectively. Provocative titles like “The Best and Worst Librarians in History,” or “Book Looters and Thieves,” don’t quite live up to their billing, while bona fide scandals (a medieval illuminator who murders his arch-rival) are often delivered in a clipped style that feels more reportorial. In “Tricks and Treasures in Library Design,” his examples of Harry Potter–like hidden chambers, or statues and busts that conceal secret staircases, also arouse great interest. But the rapid succession of these ends up having a list-like quality—sometimes resembling more of a slide show than a narrative.

Which is not to say that the book runs out of interesting material. Ultimately, Kells’ writing finds refuge in an important principle espoused by Charles McKim, the famous architect hired to build the Morgan Library. In a chapter dedicated to the building’s creation, McKim is quoted as saying that the interior of a library should “whisper and not shout.”  If J.P. Morgan eschewed this philosophy in favor of supreme opulence, Kells himself will observe it more faithfully.

In spite of some hyped-up chapter headings, the book itself maintains a proper and more learned tone of voice. Kells succeeds not by transforming libraries into places of great lore and intrigue, but by honoring these venerable institutions that the internet has yet to kill. 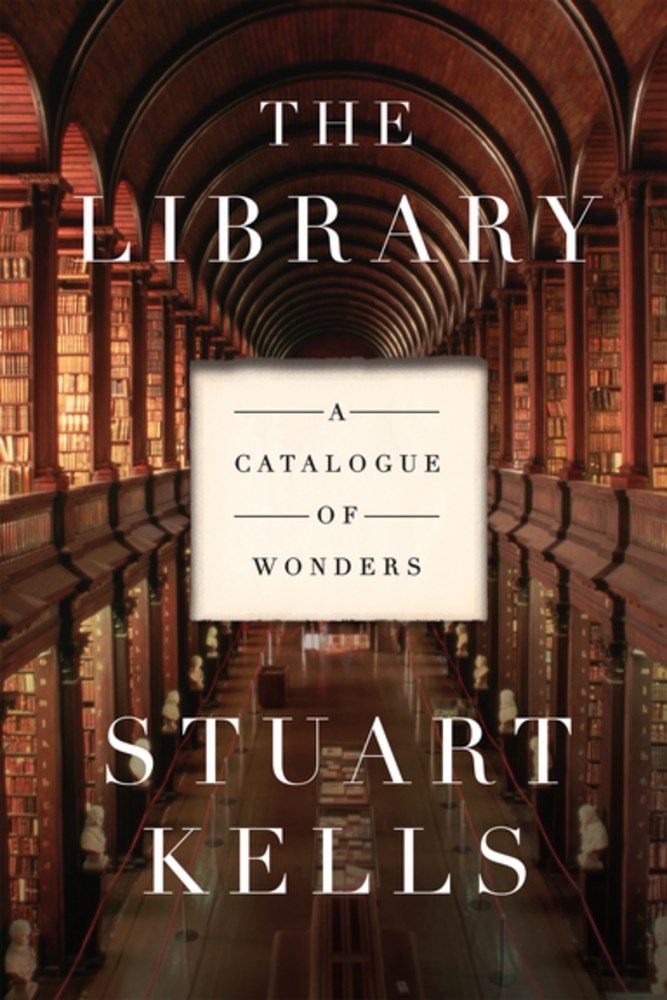 NONFICTION
The Library: A Catalogue of Wonders by Stuart Kells
Counterpoint
Published April 10, 2018

Stuart Kells is an author and book-trade historian. His 2015 history of Penguin Books,  Penguin and the Lane Brothers: The Untold Story of a Publishing Revolution” target=”_blank” rel=”noopener”>Penguin and the Lane Brothers, won the prestigious Ashurst Business Literature Prize. Rare—his critically acclaimed biography of Kay Craddock, the first female president of the International League of Antiquarian Booksellers—was published in 2011. An authority on rare books, Kells has written and published on many aspects of print culture and the book world.

Jonathan Liebson's fiction, articles and reviews have appeared in Time Out New York, Chelsea, Fifth Wednesday Journal, South Dakota Review, Meridian, Harvard Review, American Book Review, and The Georgia Review, among others, and his work also appears in the anthology Naming the World: and Other Exercises for the Creative Writer (Random House). His fiction has been selected for the InterAct Theatre Company's Writing Aloud series, in Philadelphia, and been honored by The Atlantic Monthly and the William Faulkner-William Wisdom's annual fiction competition. He holds a B.A. from Wesleyan University, an M.A. in Modern literature from the University of Kent (Canterbury, UK), and an MFA in fiction from NYU. He currently lives in Brooklyn, New York, and teaches writing and literature at Eugene Lang College of The New School and at NYU's School of Professional Studies. His writing and photography can be seen at Jonathanliebson.com

Sometimes It’s the Symptoms That Kill You: An Interview with George Prochnik on “I Dream with Open Eyes”

The Dual Journey of Becoming a Parent and Yourself: An Interview with Krys Malcolm Belc