Alexandra Borowitz Revels in the Chaos of Weddings

I adjusted the headphones in my windowless studio at Brilliance Audio in Grand Haven, Michigan. “It’s temperature-controlled,” the director Ken Schmidt had told me on the drive from the Holiday Inn earlier that morning. Outside, full-blown Michigan winter unleashed icy, howling winds. I had just turned down the heat in the shoe box-sized room. Still, my palms were sweaty. It was my first day recording the audiobook for my first book, a memoir called Feast: True Love in and Out of the Kitchen, and I was hot with nervousness.

The problem wasn’t the headphones—they were seriously high quality headphones. It was the intensity of my voice. As I read, my own words seemed to reverberate in my head and bounce around my skull. They were loud and aggressive. It was unnerving. It was emotionally draining.

“Can we turn down the volume?” Outside my technically impressive cave, Ken and Matt, the engineers, were making the magic happen. They couldn’t see me, but they could hear every breath and rustle and word. They didn’t have windows to the outside world either, but they kept the door open to the long hall full of studios with serious sound insulation and blinking signs that said, “Quiet please, recording.” They had created thousands of audiobooks between the them. I had entered a different universe, and I was grateful that some of us knew what we were doing.

Matt turned down the volume when I asked. He turned it down more when I asked again. It helped a little, but my voice still seemed to thunder. The headphones created an echo chamber.

How do you narrate your book? It’s pretty simple. You just read. There’s no real way to practice—Feast took three days to record in nine-hour stretches. The studio had scheduled four days just in case. Next to me, a stash of water, Throat Coat tea, and lozenges, which I made ample use of.

Ken had emailed me a list of pro tips for book recording (“eating a light breakfast and snacks helps avoid tummy rumbles” and “avoid bracelets, watches, etc. as they tend to make noise.”). I was immediately grateful for Ken’s knowledge and generous patience. He took me on a tour of Brilliance Audio. A long hallway led to recording studio after recording studio. In the back, a factory floor produced CDs and other physical media. There were jars of candies and lozenges everywhere. I kept taking more. My throat felt chapped but lemony.

Ken introduced me to a few professional audiobook narrators. A kind woman gave me a palm full of Advil. “Your voice is a muscle,” she explained. “It’s not used to working for so many hours at a time.”

Sure enough, I popped the painkillers around lunchtime on day one. My throat had become tight and scratchy. Ken kept asking me to pause and take a sip of water. I did, which meant I had to pee constantly.

Slowly, I got used to the echo of my own voice. We did “punch recording,” which means I read until I made a mistake. Then Matt played back the last good sentence and I jumped in where I left off. I didn’t want to waste their time with too many mistakes. Ken had even looked up the pronunciation of all the French works and obscure food terms ahead of time. (The only word we weren’t totally sure on was the Belgian cheese Wavreumont.)

I became exceptionally focused, as if I had entered a sort of meditative state. It was just my own words and me in that little booth. It was just Feast. Sentences, paragraphs, pages took on their own life and filled up all of my mental space. It was thrilling and exhausting.

Sometimes Ken chimed in with instructions, urging me to slow down or speed up or lower my register for someone’s voice.

“Do you feel comfortable doing a Greek accent?” he asked. I have a minor character in the first chapter who speaks with one.

“No way.” I’m terrible at all accents.

“Then we have to think of some way to distinguish his voice,” Ken urged.

The voices turned out to be the second hardest part of the whole process. The first hardest part was the emotional weirdness.

Feast is about working my way through restaurants, falling in love with food (and the wrong men), and recovering from a brutal eating disorder. Since it’s my debut, every step along the publishing process is new to me. Oh THIS is how they do it, I keep thinking. The whole thing is equal parts exciting and terrifying.

Part of me thought writing Feast would be, if not quite cathartic, somehow satisfying. Sure, I delved into the biggest, hardest parts of my life. But those things were behind me by the time I sat down to finish my proposal. I had recovered from my anorexia and binge eating. I had broken up with Nick, who was a married alcoholic when we met, and full of rage even when he got a separation and sober. Ten years after the fact, I finally got the courage to write about getting raped by a chef I had admired.

Writing Feast would be easy as pie.

It wasn’t, of course. My own memoir transported me right back into the middle of the eating disorder, the rape, the miserable relationships with older, wrong-for-me men. It was as if my hard-earned perspective had evaporated and left me back at age 18, full of self-loathing and despair. By the time Feast had endured its six rounds of edits, two rounds of copyedits, legal review, and proofreading, I had been through the emotional ringer. But it was completely worth it.

Do memoirists reading their own books ever burst in to tears?” I asked Matt and Ken. I was a little worried I might.

“Oh, all the time,” they both agreed, which reassured me a bit. At least I wouldn’t be the first.

Reading was even more immediate and raw than writing the book had been. As I recounted my merciless last binge, my rape, my breakups, I felt my throat tighten and my muscles contract.

And again. And again. I had to take more than a few moments to wipe away tears. When writing, I could shut my laptop and go for a walk. I could call my mom or paint my nails or turn on the TV. But I was trapped in the little recording booth, trapped in my own story, my own past. Ken and Matt were patient, but I was conscious that they were waiting for me.

Reading Feast was like parachuting into the front lines of the very worst moments of my life. I was 18 again, starving myself to fit into the tiny dress I believed was the key to me landing my hostessing job at a super fancy restaurant. I was 22 and miserable at my corporate steakhouse job in Pasadena, crying in the walk-in refrigerator. I was sticking my finger down my throat, trying but failing to make myself puke after an epically destructive binge on cookies and everything else in my kitchen.

In the studio, I turned down the heat even more. All of this self-loathing made me warm and clammy. I went to pee for the seventh time. I splashed water on my face. I pulled myself together.

At the end of the day, I had only the Holiday Inn to go back to. I was wound up and lonely. Yet if recording Feast was more excruciating than writing it, it was also cleansing and rewarding. Writing the book took three years. Speaking it took three days. Everything felt distilled. Once the words were spoken, I was finished. Easy as pie.

At the end of day three, I was on a roll. “You’re sounding so great now,” Ken suggested, “Let’s go back and do the first chapter again.”

I could hear the difference when he played back the two takes. The second time, my voice was surer, yet also somehow tender. I guess that’s the way I’d like to write, to live—fearless yet vulnerable. I had to brave the dark echo chamber of my own brain, but then I got to offer something I made, a piece of me, to the world.

I was still in a fugue state when we went out for ruebens in Grand Haven. Outside, the town sparkled in November sunshine.

“You have to write another book so you can come back and do it all again,” Matt said. The idea seemed impossible, and essential. 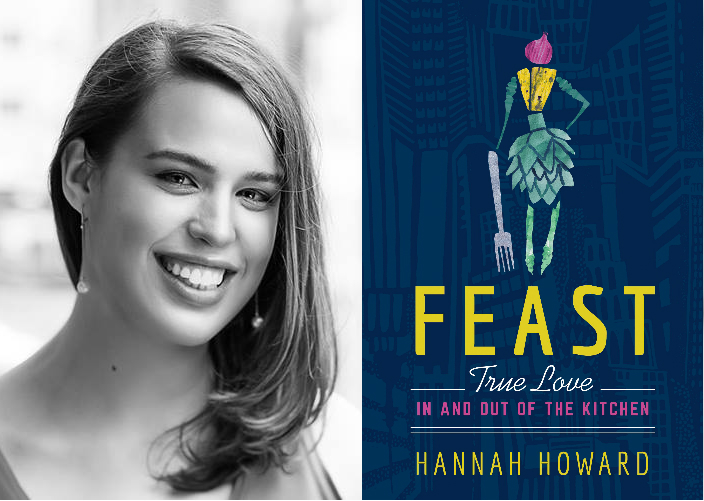 NONFICTION – MEMOIR
Feast: True Love in and out of the Kitchen
By Hannah Howard
Little A
Published April 1, 2018

Hannah Howard received her BA from Columbia University in creative writing and anthropology in 2009. She is currently pursuing her MFA in creative nonfiction at the Bennington Writing Seminars, where she is a recipient of the Lucy Grealy Scholarship. Her work has been published in New York Magazine, VICE, and Self.

Hannah is a the author of Feast: True Love in and out of the Kitchen. She lives in New York City.