Looking back at AMC’s greatest critical and commercial successes, the network seems to have staked its claim in two distinct areas: lovingly detailed recreations of a pivotal historical moment and . . . gut-splatter.

Right in the middle of this Venn diagram is The Terror, AMC’s new history-horror hybrid, which premieres tonight (Monday, March 26). It’s based on the 2007 bestseller by Dan Simmons, which was inspired by a famous British polar expedition of 129 men on two ships, none of which — neither the ships nor the men — returned.

The pun of the title becomes clear when you hear the names of the ships lost on the Franklin polar expedition, which embarked in 1845: the HMS Erebus and, wait for it, the HMS Terror. Both were British bomb vessels, retrofitted for Arctic exploration after seeing service in the War of 1812. The Terror, as it happens, was among the ships bombarding Fort McHenry during the 1814 Battle of Baltimore, hurling some of the “bombs bursting in air” immortalized by Francis Scott Key after witnessing the battle.

So history laid the groundwork for Simmons’ book and this series. But both, as fictional adaptations must, take great liberties. When a character remarks “this place wants us dead,” he’s not wrong. There are few environments in the world less hospitable than the Canadian Arctic through which the Franklin expedition was attempting to sail. But the series departs from “true events” with a supernatural twist, a creature that promises to be more active in actually killing off the trespassers as individuals, though in the first episode there are only hints of this element.

If you’re here for the recreation of the historical period, it’s everything you could hope for — Royal Navy uniforms gleaming with polished brass buttons and showy golden epaulets; officers dining in style, their heavy silverware clinking against fine china; sailors bedded down belowdecks in drooping hammocks, endlessly swaying, swaying, swaying with the motion of the ship.

If you’re here for the gore, well, you need only wait 10 minutes before someone starts vomiting blood. (Also, Episode 2 is literally titled “Gore,” so apparently there’s plenty more to come.)

Or perhaps you enjoy prestige actors in prestige productions, in which case, “The Terror” won’t keep you waiting there either. Here’s Jared Harris, an AMC returnee from his earlier stint as Lane Pryce on “Mad Men,” playing Francis Crozier, captain of the HMS Terror. Here, too, are Tobias Menzies and Ciaran Hinds, who HBO viewers of a certain vintage will be delighted to recognize from that network’s “Rome,” in which they excelled as Brutus and Julius Caesar, respectively. In “The Terror” they are two of the three highest-ranking officers: Menzies as James Fitzjames, captain of the Erebus, and Hinds as Admiral John Franklin, commander of the expedition and maker of at least one epically bad decision.

These three characters, and many others, use the names of their real-life counterparts – the only acceptable reason to have a ship’s doctor named, as this one was and is, Harry Goodsir — and the first episode sticks closely to the known history of the Terror and Erebus as their doomed expedition unfolded. If the mention of those swaying hammocks above makes you worry the ships’ rocking might become a problem, it won’t; by the end of the first episode both ships are locked permanently in polar ice, after which they sway no more.

Familiarity with the relevant history helps make sense of the first episode, which unfolds at a rapid clip even as the ships grind to their final halt. A number of scenes are presented without context, including a brief prologue set several years after the ships were lost, which undercuts rather than enhances the tension by immediately informing you which of the main characters you’re about to meet survived long enough to meet local Inuit. A flashback to a gilded theater where several polar explorers rise to accept applause provides no explanation of why, when Sir John Franklin rises, some of the cheers turn to jeers. (It has to do with modern-day Tasmania, though it’s unclear from the episode whether Franklin’s pre-Arctic issues will be addressed in the show.)

Whether that first episode provides enough impetus for you to continue watching depends, again, on what you’re here for. Your desire to go on may depend on how you feel when a genuinely tense, dread-laden sequence — a lone diver descending into freezing Arctic waters to diagnose what’s wrong with the Erebus’ main propeller — is intercut with a genuinely gut-churning scene of an on-board autopsy. If you’d rather not watch a chunk of bloody ribcage being sawed and yanked from a body, followed by a glistening wet liver and so on, this may not be the show for you.

The unsubtle dialogue, too, can be a turnoff. When a young sailor early in the episode lies dying in misery, the surgeon informs him, “You may be a warning of things to come.” When Franklin overrides Crozier’s (completely accurate) objections and commands both ships to straight into the gathering winter ice, Crozier informs him, “If you are wrong, we are about to commit an act of hubris we may not survive.”

Yet for fans of history and spectacle, the visuals can be breathtaking. After Franklin commits exactly the act of hubris Crozier warns him against, the show accelerates directly to the grim result: both ships frozen motionless on a broad white sea, framing dozens of uniformed men with picks and saws as they hack away fruitlessly at the ice they’re standing on, hoping against hope to break it.

By the time the first hour is up, the ice has already won. It’ll take nine more episodes to exact its final victory. Or perhaps this adaptation departs from history and someone we’ve met will make it out alive. Time will tell. In the meantime, ready yourselves for an artfully composed landscape of white and pale gray, interrupted frequently by the color that gut-splatter fans want most to see: the vivid red of blood. 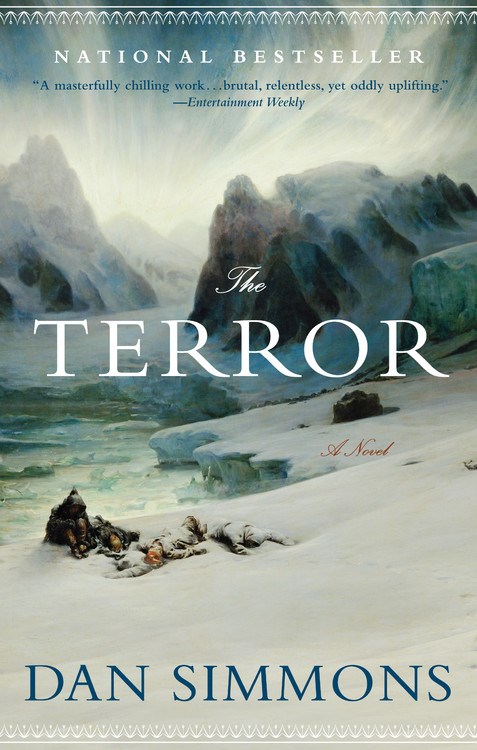 BASED ON:
FICTION — HORROR, HISTORICAL
The Terror by Dan Simmons
Little, Brown and Company
Published 2007

Dan Simmons is a recipient of a Hugo Award and the author of critically acclaimed suspense and science fiction novels. He makes his home in Colorado.