Join Us For a ‘Conversation’ About the Body

Joyce Carol Oates has been a prolific American writer for over 50 years, and “Where Are You Going, Where Have You Been?” is in my personal canon of classic short stories worth teaching and re-reading. So going into her newest collection, Beautiful Days, I was prepared at least to be pleased, or at the very least satisfied. Instead, I found myself asking if Oates was trolling her readers — like her Twitter feed suggests — or if her ideas about men and women are simply outdated.

Oates is known for interrogating the psychologies of “bad” people, and she’s often succeeded, earning awards and critical acclaim. But while her wider body of work might stick the landing, Beautiful Days struggles to fully flesh out these “bad” minds and their intentions. Where empathy should have been bestowed, the writing misses the mark — she fails to interrogate why these characters act the way they do.

These stories are divided up into three sections. In Part I, the characters are unapologetic: they pretend at being introspective, and they’re mostly unmemorable. The first two stories feature a relationship between a man and a woman, the narration is from the third person, and the characters are mid- to late-aged.

The similarities don’t stop there: the internal narration is heavy on describing emotions, but at the expense of personality. They feel shocked, hearts beat frantically, they drive blindly, they get breathless. But there aren’t any concrete characteristics that define them as unique characters. They feel flat, with flimsy motivations. I was never aware of the morality of the characters, where they might draw a line, or how they saw the world.

In different types of stories, this blandness could help drive home a message, but in these instances, the plots craved a lively, or principled, or chaotic character. And least enjoyable of all were the ways the women saw themselves: submissive, and small, and at the mercy of others, especially their male counterparts. Of course, there are those women in literature, but the way they are written in Oates’ stories, there is no foil to show that there is another way; indeed, it feels as if the women are right to feel this way, to stay silent, and accept, and want only for the man to praise her.

In Part II, the first story “Except You Bless Me” is a shockingly distasteful account of a (white female) instructor who thinks her young black student, Larissa, is leaving her hate notes — with no evidence whatsoever besides her general in-class behavior, behavior that seven other students exhibit. She goes out of her way, with annoying parentheses, to remind us that she is a “(white, woman) instructor” teaching this “physically belligerent” girl whom she stereotypes at every turn.

She assumes Larissa has been raised by “strong-willed and defiant black women” simply because Larissa is moody; she wonders if maybe Larissa has no idea of the history of her family name, “Maybe the name is an appropriated African name?”; she fears that Larissa is judging her unpainted nails because there might be “a kind of cultural revulsion” since Larissa has long, painted nails. When Larissa mentions she wants to be a nurse, the instructor has a vision of “Larissa in a nurse’s uniform, approaching the bed of a (white, helpless) patient.” Perhaps there was a point Oates was trying to make about this meek, flat, and racist narrator, but it was not a point well made, and tainted the story from the very beginning. I was hoping for clarity by the end of the story, but all I found was an empty, abrupt ending.

In Part III, the characters are more bearable, and the plots a little more dignified, albeit at this far into the book it was hard to see past the sentence level. The unwieldy sentences, lack of commas, and overuse of parentheses are distracting. The insertion of obvious facts and asides can be infuriating, as if readers can’t infer the obvious on their own. The writing is heavy with details and belabored paragraphs, and the man-woman dynamic is stuffy and outdated.

It certainly made me question what fiction should strive to do. Teach lessons, sometimes; implore empathy; represent communities and cultures; and yes, entertain you. These stories seemed to have a starting point from which a solid and profound series of events could take place and check one of those boxes. Perhaps if the plots had widened their scope to see who these characters were outside of the narrow confines of the story structure, we would be able to discern a backstory, or a foundation, or even a sliver of motivation.

Beautiful Days does not offer the tender, complicated, flailing characters Oates is known for. Her previous body of work remains lustrous as ever, but I found nothing worth teaching or re-reading here. 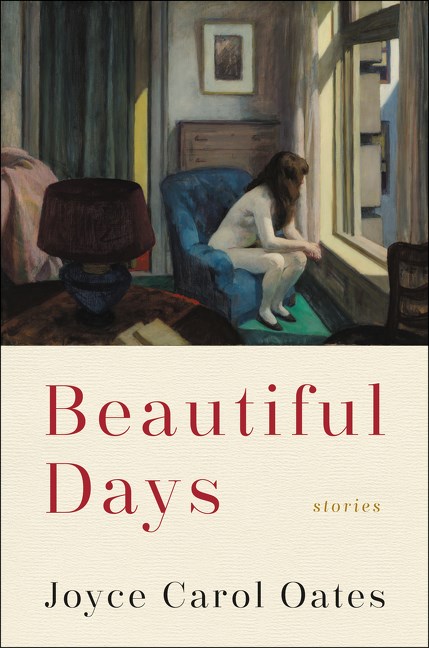 Joyce Carol Oates is the award-winning author of more than 70 novels, short story collections, poetry volumes, plays, essays, and works of criticism. Among her awards are the PEN/Malamud Award for Excellence in Short Fiction and the National Book Award. Oates is the Roger S. Berlind Distinguished Professor of the Humanities at Princeton University.

Shadows of Consciousness in “Night. Sleep. Death. the Stars.”

It’s Not Joyce Carol Oates Who Splashes Blood on Us. It’s America.